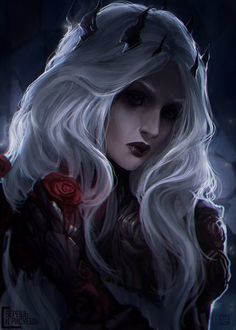 Eva returned to her home but found it empty. There was, of course, a note left for her in Cy’s careful hand. Her crimson ringed purple eyes drank in his words and then crumpled it before tossing it over her shoulder and onto the floor. Making her way through the massive stone halls, she found her way to their bedroom and immediately starting stripping off the Demon hide Armour she was wearing. How she hated it. It was balled up and thrown into a corner.

She felt as though she was near tears for some reason she could not put into words. Perhaps it was that she had expected more from her family. That they would have fucking cared that she had returned. Growling to herself, hating the feeling of weakness, she shoved it down and moved to find that special box. The three Angel Trumpet blossoms that Dami had given her were carefully pressed inside next to her other treasures and closed. Her hands closed around the box and for a heartbeat, the girl was tempted to throw it into the wall. Indeed, her hands tightened around it but in the end, she set it back into the safe.

Standing there, naked, Eva was at an utter loss. Hands rose to unbraid her hair, letting it spill down her shoulders. Now it was just past her ass an she realized she would have to cut it soon. Bundling her hair in her hands, she pulled it up and stepped up to the mirror to study herself, curious if she would look good with short hair. In the end, she thought the same thing she always did. She looked like her dad. With a sigh, she released the silver tresses and turned away.

Sitting on the edge of the bed, she set her arms upon her thighs and leaned forward, staring at her feet. Surprisingly, it had hurt when Kalm had just walked out, barely said two words to her. Was it because she wouldn’t sleep with him? Nah, she did not think it was that. He never seemed to really care about that. But either way, the one time she wanted company, wanted no.. needed to unload the burden, none were there to listen.

It took a second to feel the warmth of the tears trailing down her cheek but when she did, she clawed it away and growled again. The guilt she felt for doing the thing that would have saved the most lives sat heavily upon her shoulders. “You learned a lesson today kiddo,” She whispered to herself. “you are always welcome when they need your help but when you need them…” The girl trailed off and sighed. They had all been so gung ho to offer her help yesterday but suddenly today, they run from her like she carried the fucking plague.

Eva threw herself back onto the bed and stared up at the ceiling, her arms spread out by her head. First most of them just up and leave her and then when they return, half would not even speak to her. Again she heard that whisper in the back of her mind. Michael’s voice, mocking her. “Told you so,” It breathed. “I told you no one would care about a Nephalem. A risk and a danger.” Eva closed her eyes and took slow even breaths. Still she was unsure if it was her own creation of his voice in her head, because he had affected her that much or….

Nope. Not going there, she thought and sat upright. She needed a shower. Padding toward the bathroom Eva decided that it might be best to spend some time in hell for awhile. The bathroom door was closed and the water started up. Probably the best idea.