A strange and alien land he finds himself in, filled with the dross of Human existence. The air hung heavy with the stench of them. Breeding like cockroaches in the filth driven corners of the land, the realms were teeming with them. And this place would smelled no different.

A moment to consider the wisdom of this visit, but still, eventually that heavily tooled gauntlet reaches out and pushes upon the brass plate. It door opens a crack. There was warmth through that small sliver of civilization, and no doubt questions. He was a long way from the Underdark and so needs must. He would grin, and make nice or at least- try very hard not to kill anyone.

The door opens and standing there is a creature from another world. Slight, slender and discretely dressed in clothing as dark as his heart, his skin is the black of a starless night and seems to absorb light, whereas a hood obscured the mane of hair, sweeping from a topknot upon his head gleamed and reflected it with pristine white. A striking looking individual, but for now, his appearance swathed in the anonymity provided by the shade of a hooded cloak.

A hand rested almost unconsciously upon the hilt of a wicked sword whose blade gleamed fiercely with an arcane power, from within it’s iron tipped scabbard. Pale eyes scan the room with a sense of some mocking appraisal, as though all within had a monetary value. A sinister smile played about his lips.

Certainly there was a sinister air about the warrior, for indeed warrior he is. Not the kind of stomach churning revulsion one might feel with a minister of Death for instance, but just enough to know you wouldn’t want to sit with your back to him. The drow- Jha’el Zau Afin takes his first steps into the world of the lesser races.

His footsteps fall like a death knell. Slowly, accompanied by the jangling finality of armor that was worn and dented and had seen many battles, but perhaps not so much repair. Throwing some coin upon the bar where it scatters and spins into a low and resonant anticipation, pale eyes turn to the bar tender, and a grunt indicates ale.

The drow wore darkened garb, the hood was in fact damp with rain, as dourly neutral as his expression, as it was dropped back upon his shoulders to reveal his strangely incongruent appearance. A sword of some vicious history hung at his hip. A gloved hand rested upon it as though he were expecting all manner of enemy to come at him.

It was not a common sight- to see drow in the Red Sun Inn. They should be thankful perhaps that they do not, for they are not the most likeable of creatures generally, and do not mix well with overlanders. If they appear, and especially in numbers, perhaps it would be wise to question why?

There was only one. Jha’el. A traveller passing through. 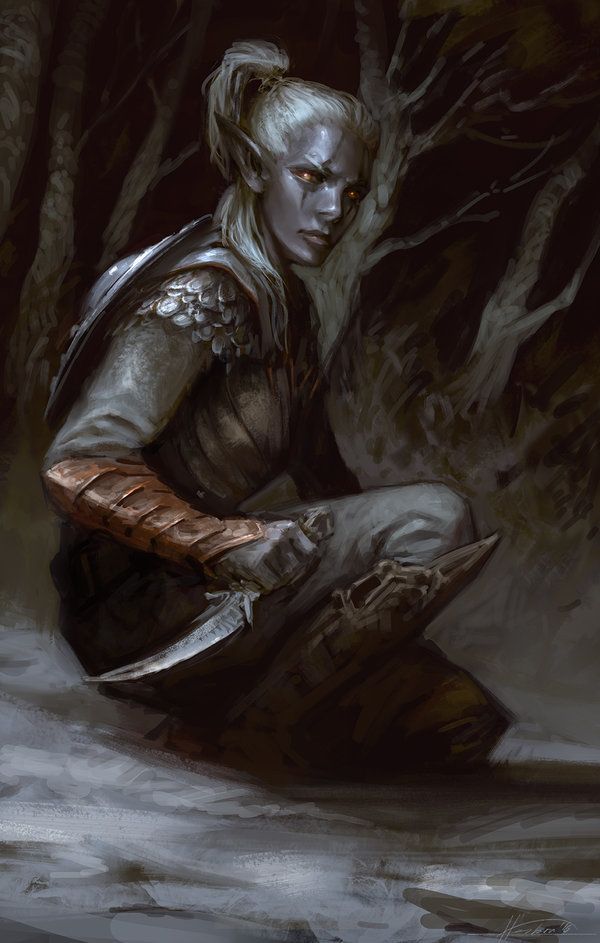 That strange traveler had been in the inn a fair while now, ordering drinks at regular intervals and eventually starting to thaw and speak with those about him, including the bar tender- who it seemed could be persuaded to give away much information, of one kept drinking at the bar.

The legendary constitution of the elven folk was not missing in this Drow. Many pints of ale later and it was as though he was drinking water but for the mildly discomforting bloating of the gut. The bar keep- whose name he found out, was Jerry, had been working the bar for many centuries it seemed. He could detect the magic of the Country within it’s walls and learned that Jerry and the spells woven within it’s very fabric, maintained the gathering place over many generations.

Jerry was very clear upon his standards though and warned the Drow that any infractions on the peace of the Inn would be met most severely by the hobgoblins and could result in something worse than death- a ban on entering the bar. This seemed to the bar keep a most heinous punishment. The Drow merely nodded grimly and growled “There will be no trouble from me” assuring Jerry of his intentions. “However, I am always prepared for trouble often finds me”

With drink in hand, he speaks expansively with Jerry, allowing the bar keep to feel as though they are engaged in a meaningful conversation. But upon review, Jerry would realize he knew nothing about this dark elf but his name – Jha’el and that he was “passing through” but perhaps had given more than he received.

There was war still simmering upon this planet. Jha’el could feel it in his gut, but it was good to have it confirmed by Jerry. An uneasy ceasefire and a lot of chaos, the knowledge of which could not be helped but provide the Drow with a reason for a smile. “Out of chaos comes order” he rumbles, pushing the empty flagon back towards Jerry for another refill. Another reason to keep talking.

Perhaps he was better at this than he thought. Perhaps this is why he had been sent in the first place? He did not care, as long as he gained the RIGHT information, this whole episode could work miracles for his status once he returns to the womb of the mother. To the Underdark. Or, it could have his flesh flayed from his bones based on a priestess’ whimsy. It was hard to tell.

Of course, he was rather hoping for the status. The Drow was in his prime, still young enough to be malleable to those powerbrokers who controlled the Underdark, and old enough to have the wisdom when to avoid harmful situations among those powerful women. He could not avoid this mission however, to do so would be folly and so resigned himself to a prolonged exile until it was done.

Outside of the watchful eyes of the Priestesses although he was sure his every move was counted and metered by magical means. He would play the game for now, perhaps he may even win, though it was a rare male that did.