Home The Book of Legion Part 2

The Book of Legion Part 2

The continued tome of Thagluran’s legions. Leading now into Devils. Beings of manipulation and deals. Structured hierarchy is a more noticed thing among these Machiavellian creatures.

Advespa: Female insectoid devils the size of large bears. Though their heads had dripping mandibles and antenna-like horns, they also had twisted female faces. They had a stinger at the end of their abdomen that could be raised like a scorpion’s above their head.

Amnizu: Guardians of Styx as it travels through the Infinite Hells, they have a similar power to remove memories from their victims as the water does. Green and gruesome looking short humanoids, though the elders can grow to large sizes. Growing from their backs are leathery wings, their heads are disproportionate and large looking for their bodies, with porcine eyes, pug noses, and bald heads. They enjoy dressing in corpulent robes. 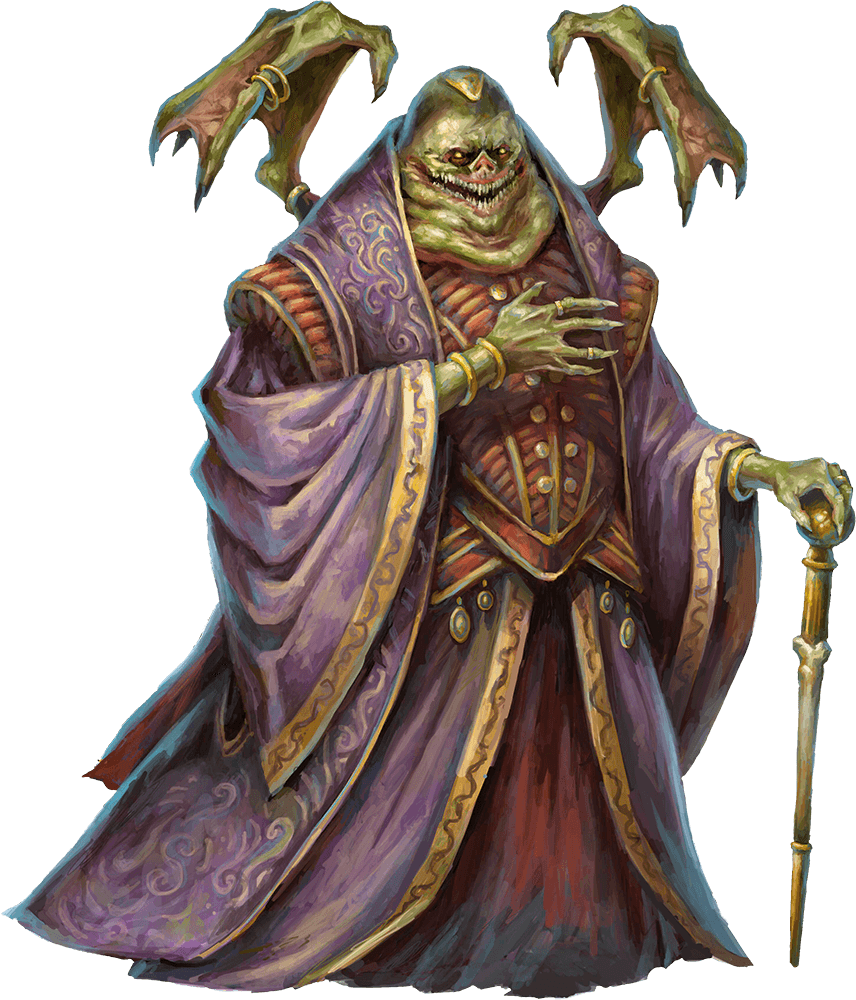 Barbazu: Also known as bearded devils, these green or purple skinned shock troops earned their nickname for the venomous beard-like tendrils that hung from their chins like beards, which were more often than not maggot infested, but are also recognized by their pointed ears and tails. Despite having clawed hands and feet, they preferred to wield wicked glaives. They carried a dangerous disease called ‘devil chills’ that caused a painful burning rash. Barbazu could also rile themselves into a battle frenzy. 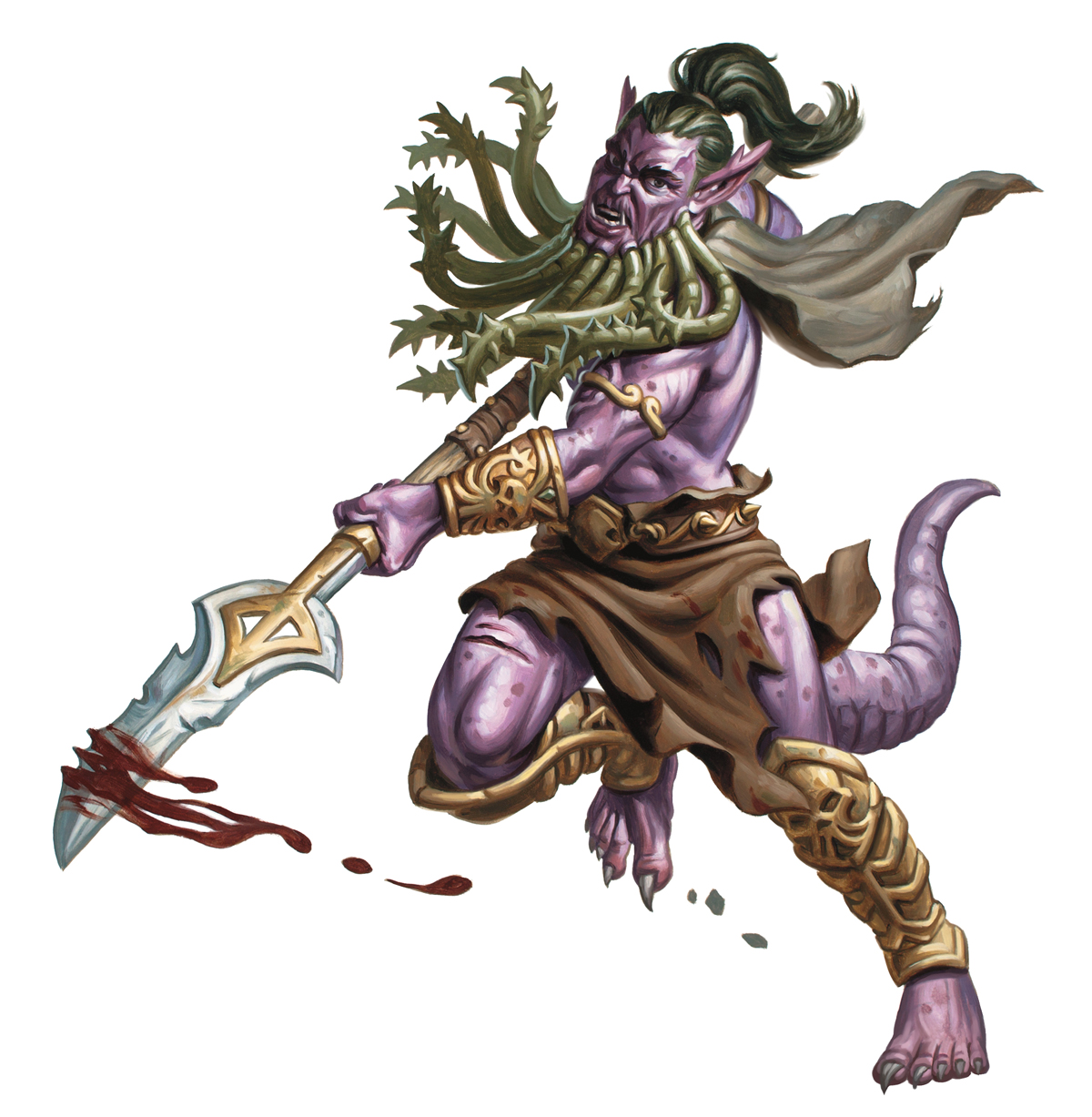 Cornugon: Also known as ‘horned-devils’, these large ogre-sized devils are considered intimidating even by other devils, with their giant leathery wings, sweeping serpentine tails, and large curved horns. They are roughly humanoid, with skin sheathed in scales. They could create auras of fear, and wounds caused by their tails, claws, fangs and horns would bleed and fester profusely until healed by some powerful force. They enjoyed using spiked chains and military forks while sweeping down from above to attack enemies. Sometimes called Malebranche, but shouldn’t be confused with War Devils who also go by that name. 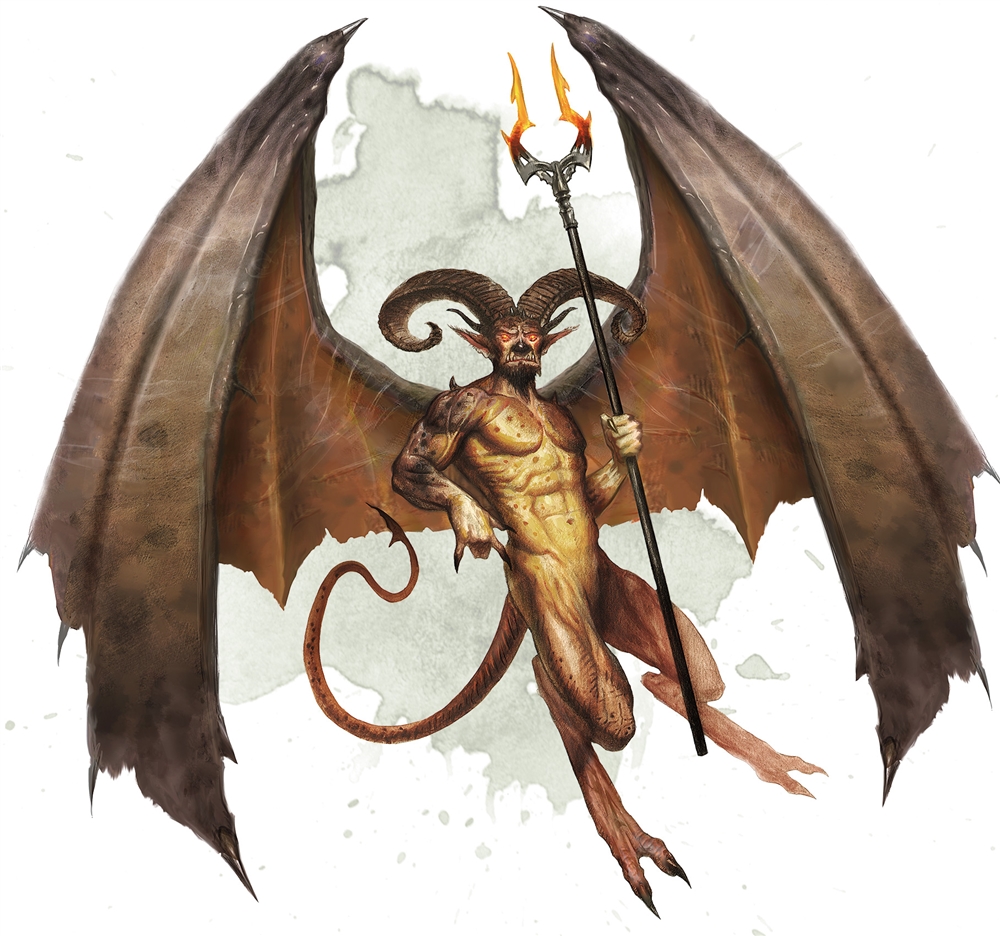 Erinyes: Their heavenly appearance belies their fiendish natures. Furies of the Hells, Erinyes look like imposing yet beautiful women, with glowing red eyes, and large feathered wings that were either black or red. However others tend to have fangs and hoofed feet instead of wings, and look more beastly. They have a powerful charm ability, that can only charm one target at a time. They wield swords, bows, and powerful ropes of binding, which they favor wrapping an enemy in the ropes only to dash them upon the ground below from high in the air. 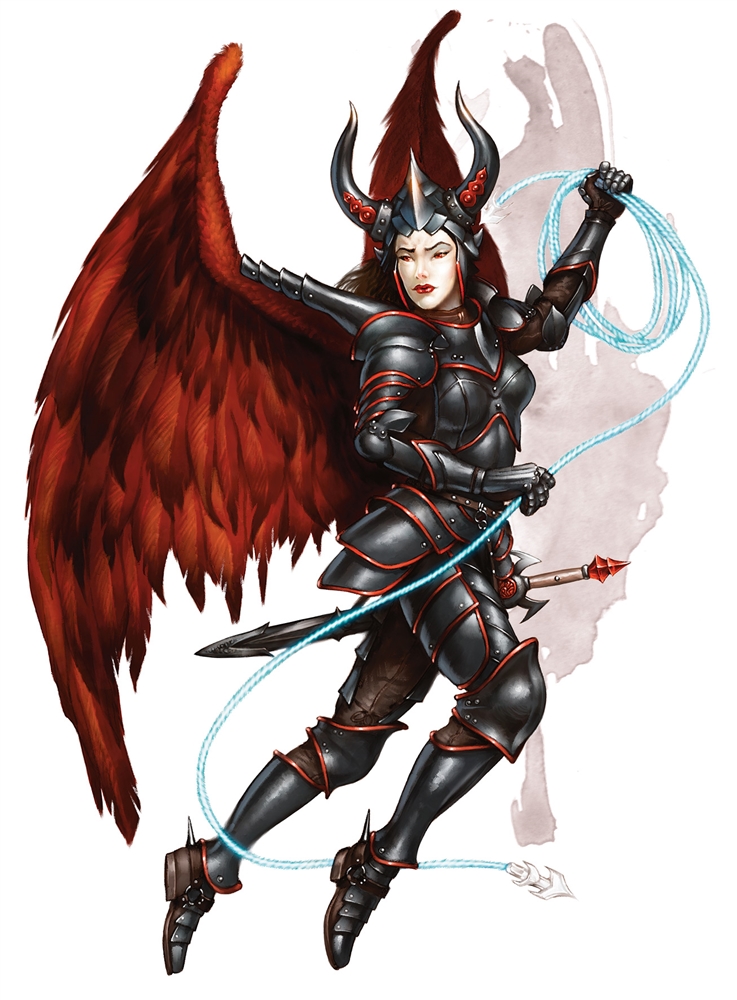 Gelugon: Known as Ice Devils, they are uncompromising commanders that see lesser devils as expendable. They had a very insectoid look, at 10 to 12 feet tall, their hands and feet ending in claws, and reptile like tails covered in spikes. Their head sports multi-faceted eyes, antenna, and large sharp mandibles. Their bodies let off an air of numbing coldness, and they released an aura of fear. They have earned their name due to their control of ice magic. 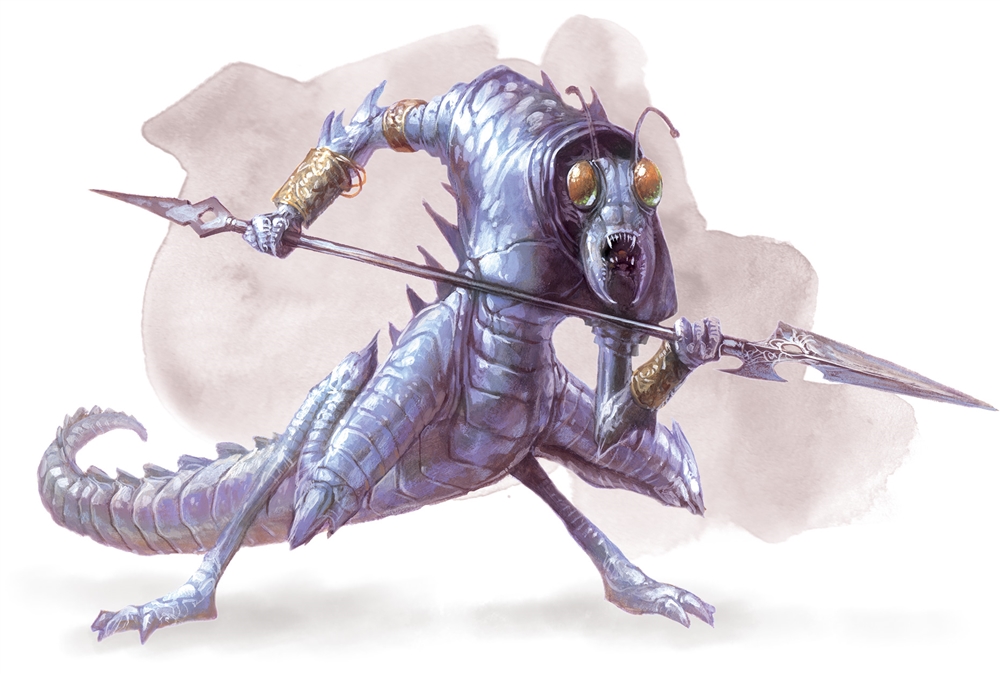 Hamatula: Barbed Devils, often played the role of guardians and patrollers of important areas and objects in the Hells. Their eyes were constantly vigilant and the quick movements of their head and body made them constantly look on edge. Their reptile like bodies were covered in spikes, their horned fingers ending in claws, and their powerful tails were used as spiked whips. They are also known for manipulating fire. 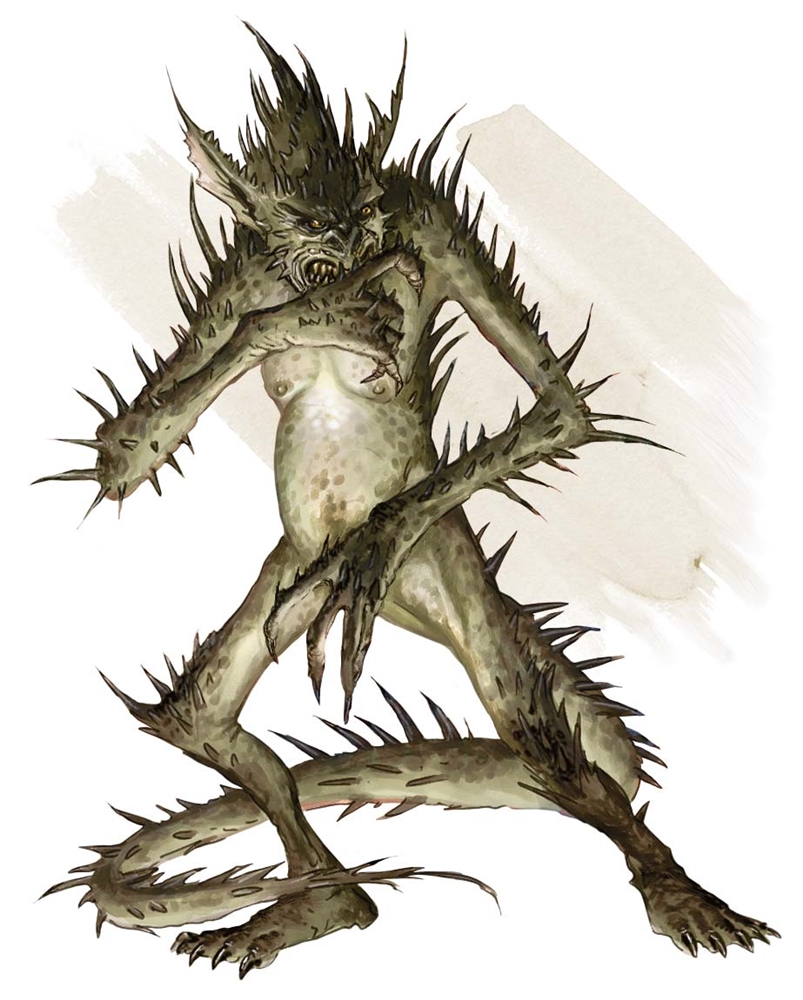 Kyton: Chain Devils, sadistic torturers, named for the chains that both serve as clothing and weapons for the devils. They are easily mistaken for humans draped in chains, their only visible facial features being their wide grinned mouth, throat, and single eye glinting from the chains from time to time. Their exposed skin covered in scars, their chains tightly bound around their bodies but also slithering as if alive, each with welded on blades and barbs, and ending with hooks, blades, and spikes. They not only animate the chains on their bodies, but could also animate other chains in their surroundings. One of their more horrid powers is to take on the visage of a dead loved one, even if only the lower half of their face can be seen, it still creates the proper illusion.

Lemure: Among the weakest devils, lemure are used as cannon fodder and slave labor among their kin. From the waist down they were formless blobs of flesh, their torsos, arms, and heads the only thing vaguely humanoid. Though their face kept melting and reforming there was always a visage of pain and anguish, as they formed from souls of evil people who passed on. Their greatest use is their ability to reform from almost any an all damage, even being turned to ash. 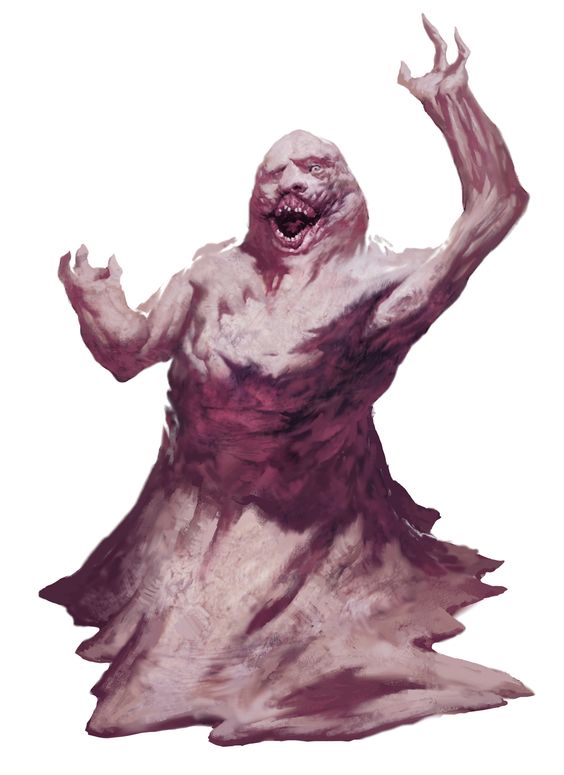 Merregon: Minor devils, known as legion devils. They are the baseline soldier for devil armies, their form all humanoid with greyish or red skin, and dangerously sharp toothed mouths. They carried weapons of mortals to fight, usually with their right hand as their left was often studded with metal bolted to it, and vestigial hand at the end. It is nearly impossible to tell them apart, and to identify them you need to look at their mask or for the mark of who their master is. Some are just simple hoofed humans with scaled and horned heads. 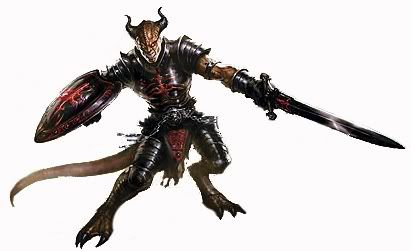 Narzugon: Easily confused as mortal men, Narzugon, also known as hell knights, were often the cavalry of the hellish legions. They all wore spiked full plate armor, and rode upon Nightmares. Their regular lances had pennants that would flow no matter the wind, and war trophies hung from their armor and saddles. Seeing one unmasked would cause you to see your greatest fear, creating a hallucination that could kill you from fear. They were able to summon their Nightmare mounts whenever they were needed, using the mount’s ability to turn into choking smoke to blind enemies after a charge. When dealing with enemies at range they would throw javelins of hellfire, but their greatest weapon was their Hellfire lances, any creature slayed by one would crawl out of the River Styx as a lemure, cursed to existence as a devil. 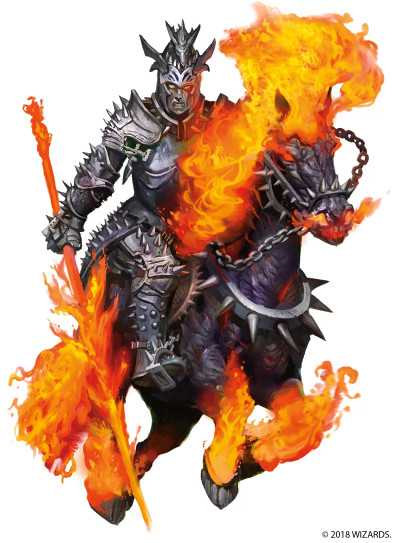 Nupperibo: “Blind-eyes” as they are called by other devils are below even lemure in hierarchy, created by incompetent and indolent souls. They were bloated masses waddling on small legs, with stunted arm like appendages. Their eyes and mouths sown shut, but that did not prevent them from shrieking or sensing pray. They were mindless and sent forth for simple tasks, swarmed by vermin that constantly stung and bit non-fiendish beings. 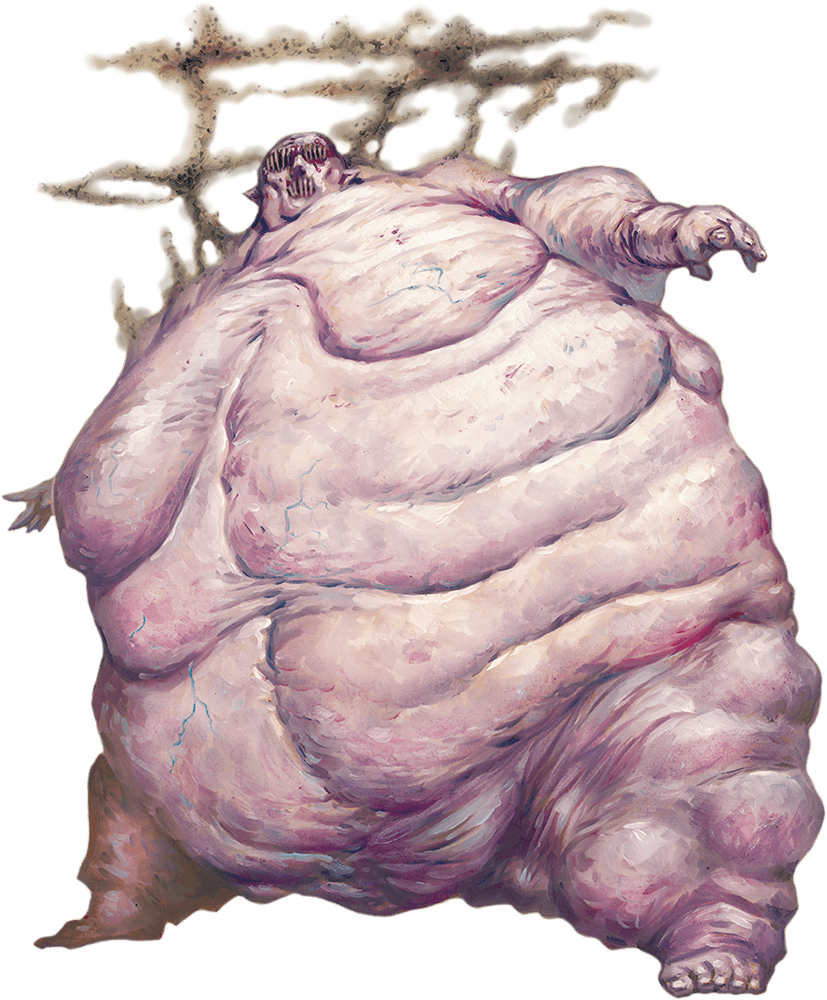 Orthon: Ogre like devils, with large tusks jutting from their mouths, they are excellent bounty hunters. Their large muscular bodies would have armor bolted directly to it, giving them extra protection, but causing constant rage inducing pain. Their main ability was to cancel out the teleportation ability of those near them, so their quarry cannot escape their wrath. Small bladed weapons and crossbows were favored by them. To help their hunt they could become invisible and see invisible things, and could track their prey across realms. They work in small units, using hand spears for the front troops and crossbows for the rear. 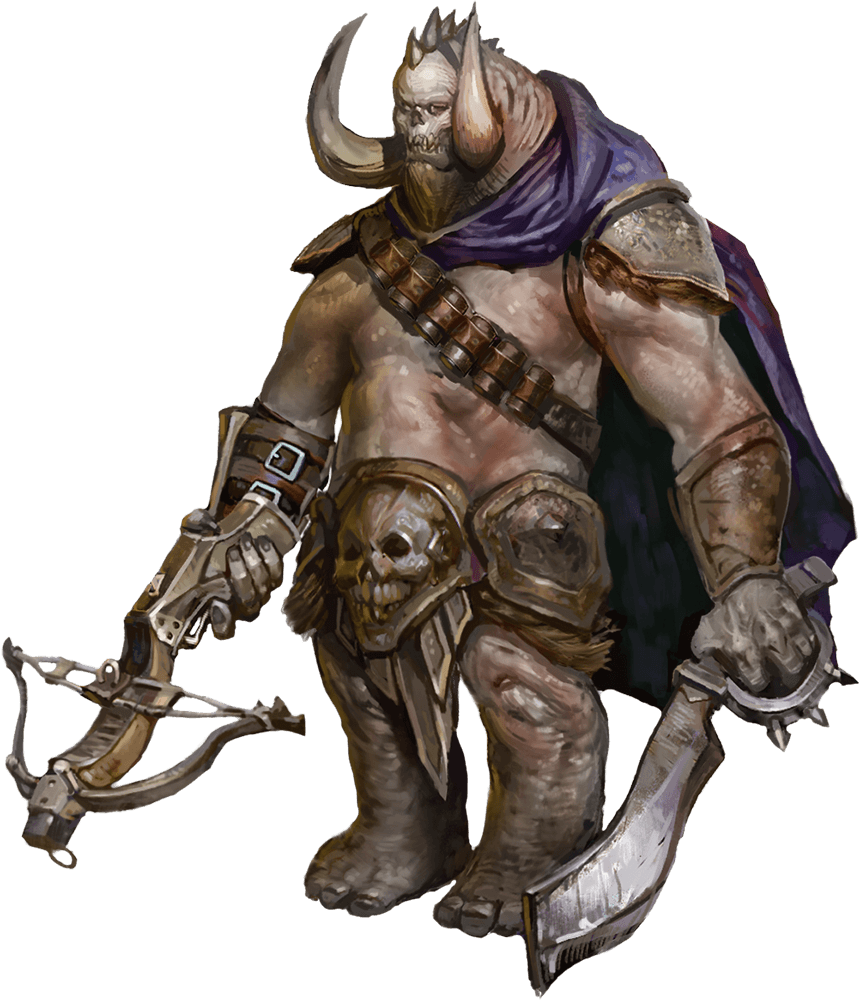 Osyluth: Bone Devils, so called because their form looked to be formed completely from bone. Taskmasters and interrogators, their presence could cause dread and fear in even other devils and demons. At 9-10 feet tall, their chalk white skin was stretched tautly over their bodies. They had insectoid wings and large scorpion like stingers. Their heads look like skulls, and a putrid stench of rot follows them. 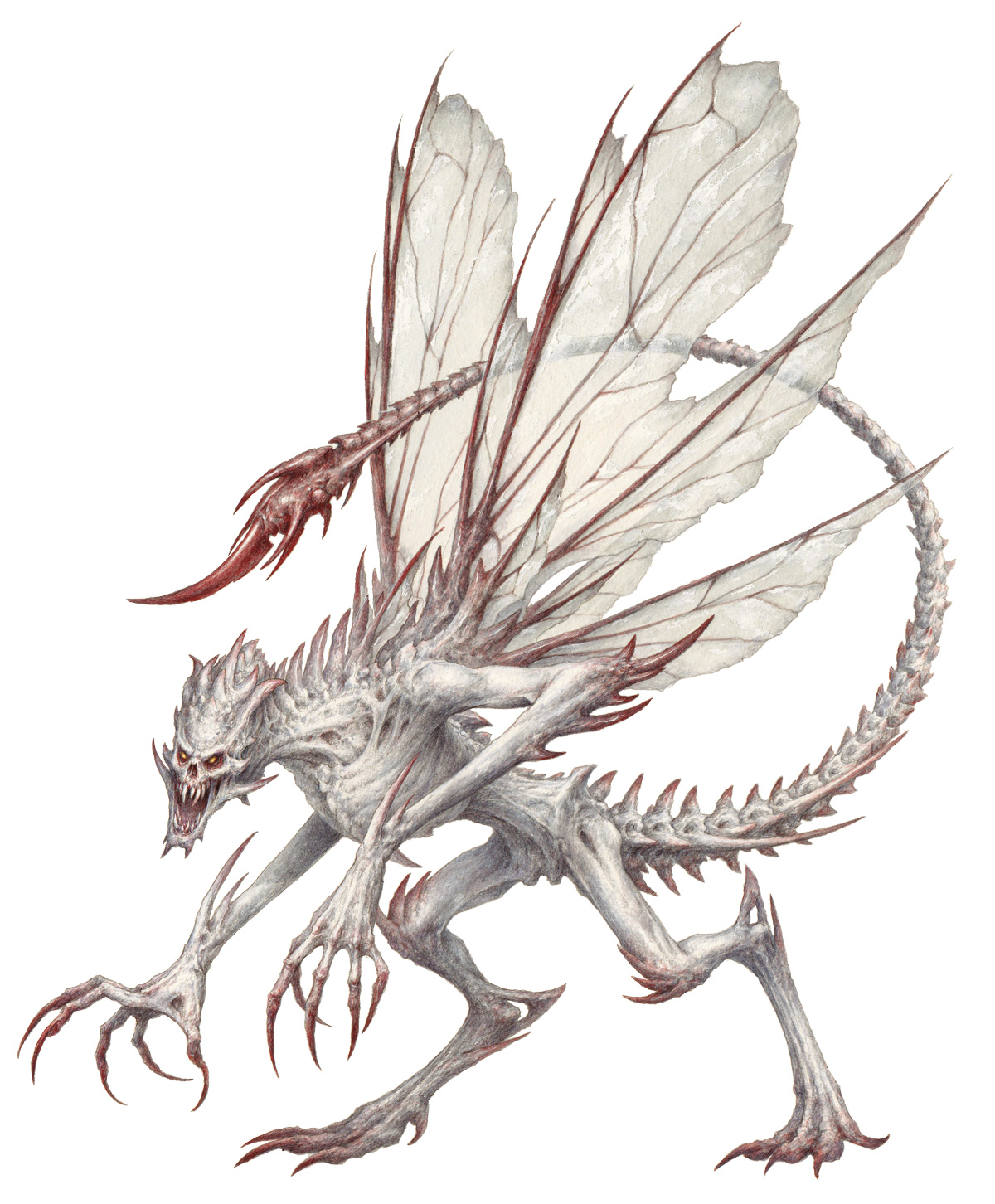 Paerliryon: Corruption Devils, they specialize in getting mortals to sell their souls, usually for blackmail, and usually ‘cheaper’ than other devils can. Corruption devils are wonderful spymasters due to their ability to gather information. A perversion of the female form, they are 16-20 feet tall, with corpulent stomachs that hung past their waists, their wart covered skin is a mix of pink and green hues, that contrasts heavily with their poorly covering black robes. Despite their large forms their leathery wings have no problem bringing them into the air. Their heads are bald, broad, with large fanged mouths, to ridges running along their head, and boils covering their face. They exude a stench of perfume, brimstone, and a vile order that seeps from their form. Their clawed nails are always bright red and can extend in an instant, and they wear a poor parody of popular make up looks. They could burrow at amazing speeds, their claws would corrupt the mind of those struck, and their words could turn their enemies against themselves. They had strong illusionary and visionary powers.

Pit Fiends: Were demons have Balrogs, devils have Pit Fiends. Majestic and horrifying, pit fiends stood at the top of the hierarchy devils, only below more powerful forces. They had large batlike wings, fangs dripping in venom, and prehensile tails they can strike with like a whip. Their bodies are heavily armored in scales, and horns crown their heads. They often wrap their bodies in their wings like a cloak. As powerful devils they could create flames with devastating power. 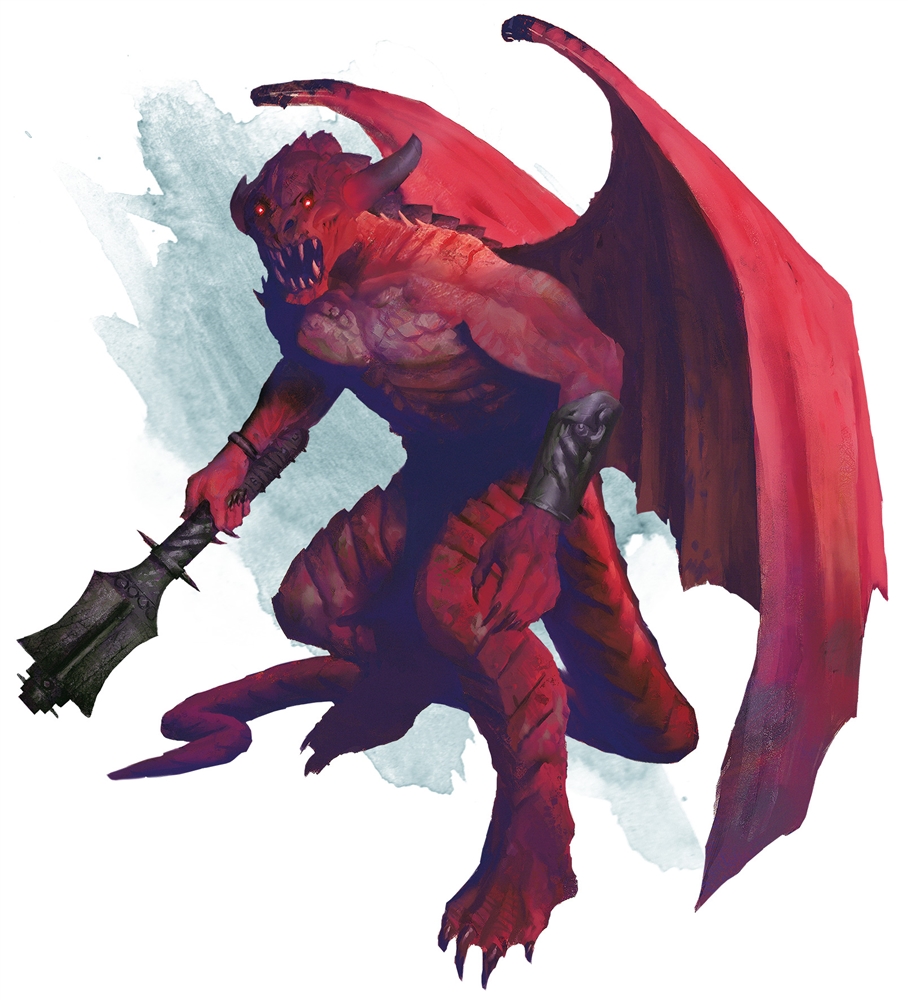 Spinagon: Spined Devils. Winged, porcupine like devils, often used as messengers between greater devils. Their eyes were muted red, they gave out high pitched giggles and shrieks to annoy other creatures. Their hands and feet ended in talons, and though their bodies were covered in spines, they are usually cowardly and easily bullied by stronger fiends. They could fire their spines, which are poisonous but could also ignite, lighting flammable things on fire. Their spells helped them hide, and they tend to carry war forks to help add to their devilish look. 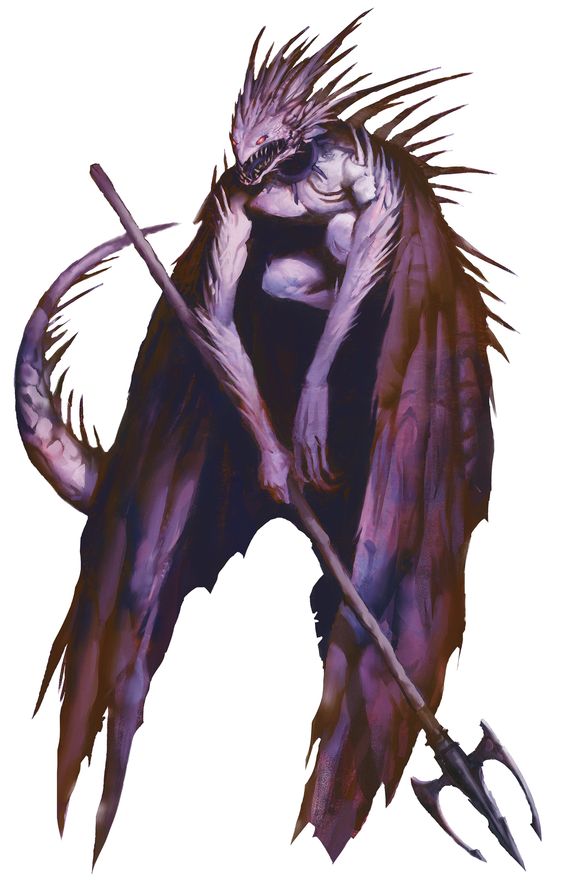