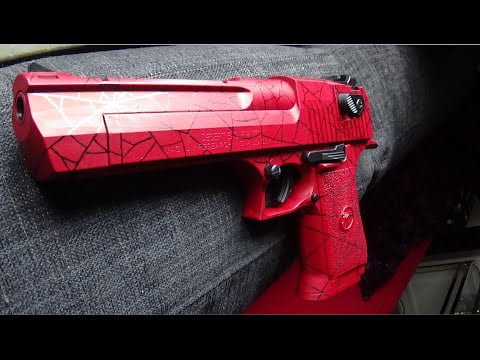 CNI-L9x: A command neural interface is located at the base of Kurai’s skull and it cannot be removed without killing her or complicated surgery. This interface contains her F.O.F signal and certain command authorizations for all Kishimoto systems including the Gabe-I-El. Lastly the CNI is designed to allow an A.I to rest both in her suit/omni-tool and to use her mind as an organic computer and reside there too. This makes the A.I able to significantly increase the data transfer rate between the user’s motor cortex and the DEFENDER Mk.5’s processing unit, increasing the user’s reflexes.

CWA-420 Omni-Tool computer v.9: Omni-tools are multipurpose diagnostic, manufacturing and computing tools that are used for a variety of tasks such as hacking, decryption, repairing, etc. The wrist mounted device combines a computer micro-frame, sensor analysis pack and miniature manufacturing fabricator. (Industrial plastics, ceramics, and light alloys.) When activated, it appears over her forearm and hand as an orange hologram.

DEFENDER Mk.5: The DEFENDER is a technological, highly advanced, protective powered armor crafted by Kurai. Its specialty designed to take a massive amount of punishment while protecting the user from the relentless void of space as the name suggests. There are three parts to the armor, the Under-Armor, the Outer Shell, and the Electronics.

Under-Armor: A /skin/ of under armor is /grown/ to fit the user’s exact body type to assure maximum range of motion while removing the ability for user to over-exert themselves. It is a sealed system, capable of extravehicular and submersible activities or operations in toxic environments. It is hardened against EMP and radiation, and has filters that are completely effective at removing toxins and bacteria from the local atmosphere. During the beginning process servos and artificial muscles are crafted to increase the speed, strength, agility and reflexes of the user. The material is actually crafted out of billions of self-replicating nanites that automatically replace any lost nanites and /heal/ the second skin, but these little robots can be overtaxed and the healing properties can slow to a stop. The nanites are created out of similar metal that Gabe’s hull was crafted, without the more dense material like iridium.

Outer Shell: The armors outer shell is composed of a multilayered alloy of remarkable strength that has been hardened at the molecular level and augmented with a specialized, refractive coating capable of dispersing a limited amount of energy based weapons. These armor pieces are made of exactly what the Gabe-I-El’s hull is composed of, making the armor nearly invincible. The layers of vibranuim in the center of the pieces serve to absorb the kinetic force of shock and redistribute it into the energy system, but it is not perfect. While the armor might be impervious to stabbing or piercing, the shock can still crush the bones and organs of the user within. The suit also possess other features that enhance the wearers potential, there are numerous clips, belt magnetic holsters for the attachment of additional weapons and gear.

Electronics: This section contains the helmet, gloves, boots, and Armor Management Suite
-Helmet: Contains an advanced Heads-Up Display with two display modes. The first mode is standard with anyone wearing the armor without a Neural Interlace, the normal holographic display that shows a mini-map, shield strength, a targeting reticle, waypoints, and has a radio uplink for communication and other useful data. The second mode is an Augmented Reality, where the A.I and suit software assesses the location, enemies and friendlies, and provides real time updated information i.e. marking an enemy in a red light the moment they turned a corner.
-Gloves: Sensors within the gloves detect the type of weapon and/or devices head, if the weapon contains any kind of electronics suite then they can linked together. (Every Crimson Weapon contains a Weapons Management Suite.) It presents on the H.U.D an ammunition count, temperature gauge, and a very real time targeting reticle that alerts you when your target is out of range or external forces affect the flight path of the round.
-Boots: Equipped with a magnetic pulse for sticking onto metal surfaces such as a spaceship or space station.
-A.M.S: While electronics are placed in all aspects of the suit, from the sensors and servos in the Under-Armor to shield generators in the Outer Shell. The majority of the electronics are located both in the chest piece where the processors are located and on the back where the mini fusion reactor that powers the suit is located. Thruster packs are also located on the back of the armor capable of sustained flight for a few seconds; but it’s main purpose is to fire micro thrusts in response to recoil and user movement in a zero-G environment. Lastly the majority of the DEFENDER’s electronic components are a shrunk down version of the Gabe’s Black-Light shield generator, proving the same type of shield at 3/4th the strength.

Crimson Weapons
Kurai has specially and painstakingly created her own line of high tech firearms out of technology she’s acquired in her travels. Each one of these special weapons of war is crafted and finished in a specialized crimson color that will never fade or scratch. While the different firearms have different rate of fire and fire different calibers of ammunition, there are similarities across all types and models.

Each gun is a micro-scaled mass accelerator that propels a solid metal slug using a precisely controlled electromagnetic attraction and repulsion system, which in combination with eezo technology reduces the mass of the slug and permits greater speeds previously unattainable. Internal shavers generate thousands of rounds from a single block of metal, which makes reloading something highly infrequent and not necessary in the middle of a firefight. Two other features present in  each Crimson Weapon, targeting auto-assist and recoil mitigation technology. The major flaw of this weapon design is the amount of heat continuous fire produces, so the gun will become inoperable to vent gathered heat in order to project the more sensitive electronic components.

EZ Cut: This modification can be placed on any bladed weapon with  a cutting edge. The sharpened blade of the weapon is heated up to white hot temperatures, while the entire length of the blade is subjected to intense, minute vibrations. The combined effect creates a melting/cutting effect that reduces the amount of force needed to cut something.