Home The Crows (Chapter 2: The Saviours)

The Crows (Chapter 2: The Saviours) 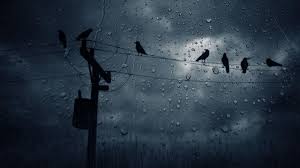 The female laid there, her forehead cut and bleeding it was too  long till a man can speeding, he sat at her feet, worry written along his pale face he looks as if he had been trapped inside for days, months maybe even years. we had lost count of what year we were in this had taken a real toll on humanity, with the crows caws sounding like the trumpet of a death march, the whistle that sent innocent soldiers over the trenches to get mowed down, with a sigh the male shook the female and she shot awake screaming and kicking the male by her feet “owch!” he had fallen and he was holding his face “what was that for!” the female slid back “dont hurt me” she cried and she slides against the wall “please! l.. leave me alone!” she screams and the male stepped forward “its ok miss! its ok! im not infected” as he said that she calmed down “thank g.. god” she looks up with a sigh soon tears fell down her face, the male raised a brow and he sat on the edge of the bed “hey w… whats wrong miss” he spoke and she said “alex… m.. my brother got inf.. infected..” the female grabbed onto the males shoulder and she thrusted her face into his shoulders, her crying was soft but it was soon overtaken by a crash. the jumped and they peered out a barricaded window, crows circled the sky and a building which had blown up, crows encircled the building and another bubbling sound and the building melted, people… dark figures walked from it with distorted walks they drew closer to the two, the figures their bodies bubbling and popping black ooze dripping down their melted devilish grin, one points at the window and gurgles “arthack!” crows dart toward the building and the male pulls the female out and they ran just as a teeth rattling “BOOM” the crows had blown up the safehouse the stumbled but kept running and running and running the crows caws grew louder and louder until “slrgh” and darkness