Home The Darker The Sky, The More Vivid Our Stars.

The Darker The Sky, The More Vivid Our Stars. 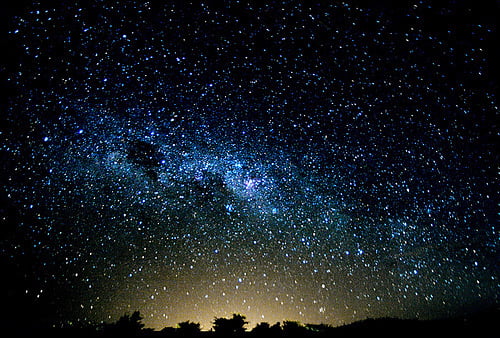 The darker the sky, the more vivid our stars.

Bannoc stared up at the black awning above, an endless canvas embedded with hundreds of sparkling silver jewels. The crown of the north. While the rest of the camp slumbered miles away, he braved the emptiness of the frozen tundra alone, to dwell awhile in the serenity of night. There was sanctuary to be found here, far far away, where the hubris of humanity couldn’t reach and despoil the natural order. The stillness was soothing, the pale lights upon high furnished with a magical quality not of this realm. The stars reminded him of celestial tears, ethereal dreams, the hopes and despairs of all living things reflected in the world above.

From his perch on a snow-laden boulder, Bannoc searched the breadth of the heavens for the constellation of Alawe, the huntress, whose stars formed the Great Spear. He liked to think that his sister, never one for the carnage of war, had forgone the warrior’s afterlife of Urocia, brazenly demanding her place within the Great Spear that had so often guided her ventures in the wilderness. When at last he found the constellation that mirrored his sister’s beauty, an ache emerged in his heart, a deep-seated pain within the lonely chasm that had grown from her absence. For she was gone and neither love nor wealth would bring her back to sew the wound of wounds. The agony would never truly vanish, only grow easier to carry with time. He was overcome with a longing that could not be quenched, a desire to see the sibling he had lost. To talk to her one last time. They had never had the opportunity to share final words. What would they have said to each other? He couldn’t speak for what Amawyth might say, she was anything but predictable. He would have told her how she illuminated his day. How she gave him courage when the yawning abyss came calling for his soul. He would have told her how much he loved her. Now, he would never hear the effervescent symphony of her voice, nor feel her hand upon his shoulder during the darkest nights. Only in his dreams could he look upon her face. But there wasn’t only desolation as he gazed up at the Great Spear. There was joy, the elation at having been blessed with the honour of knowing and loving someone so utterly remarkable. Her stories would live on through him, through the memories they had forged together.

It hurt, but it was important that Bannoc paid his respects, tonight of all nights. It was the first anniversary of her passing. Amawyth Karvosi, his beloved sister, cruelly taken away in her prime of her life by the devastating disease of deception. She was the huntress. The ranger. The mediator and clear voice of reason. Wild and untamed like a winter rose, yet sensible beyond her years. She had deserved so much more. Bannoc had always looked up to her, a shining example of everything the noble of heart should aspire to be. That is what made this so hard to bear, the knowledge that a woman who had earned so much was left with nothing. The helplessness struck him hardest whenever his hands were idle. The futility, the unfairness of it all, made him yearn to drown his sorrows at the bottom of a bottle of hard liquor. But in honour of her fortitude, he steered away from the Defiler’s piss. She wouldn’t have wanted him to mope, she was too strong for that. She faced her angers, her fears and her losses with a bravery he could only hope to emulate. It was one of his sacred duties now, to mirror her courage.

“Straighten those shoulders. Smile, it’s important to smile. Pain passes like the setting of the sun,” she had always said to him in their youth whenever his burdens dragged his spirit down into the dirt. “It never fully goes away. But remember, the sun shall always rise anew.”

Amawyth never would have told him not to weep. In her eyes, tears meant that you were alive, that you had not turned to stone.

“Not all tears are wicked, Bann.”

He slid from his boulder and ignoring the bite of ice in his knees, knelt in the snow. Not once did he look away from the Great Spear above. He saw her there, the brightest of the panoply, gleaming from afar. Smiling down on him. He smiled back, paradoxical tears in his eyes, the merging of suffering and reconciliation.

“You sang to me once,” he told her. “When we were children, when Grandmother passed beyond where we could follow. You were creative like that. The consummate artist, capable of such works of magic on a whim. Do you recall the words of your song? I do. Word for word.

A time will come,

when my star shall shine,

a guiding light upon you.

as the dark night falls,

my light, our memories, shall heal you.

A time will come,

when those black clouds part,

and eternal night turns to day.

My tales and our stories,

all our journeys and our glories,

believe in us, and at last you shall find your way.

Those words gave me comfort. They still do. With them I honour you, I honour everything that you were, everything you stood for. A fortress of courage, a bastion of devotion. An inspiration to all those who walked at your side, through the bright days and the dark. You taught me so much, my sister. One day I will see you again. On that day we will dance and play in the forest as we did as children. On that day I shall hold you once more, and I shall revel in the wisdom of your tales, the beauty of your songs. Farewell, soaring bird. You are forever in my heart and deeds.”