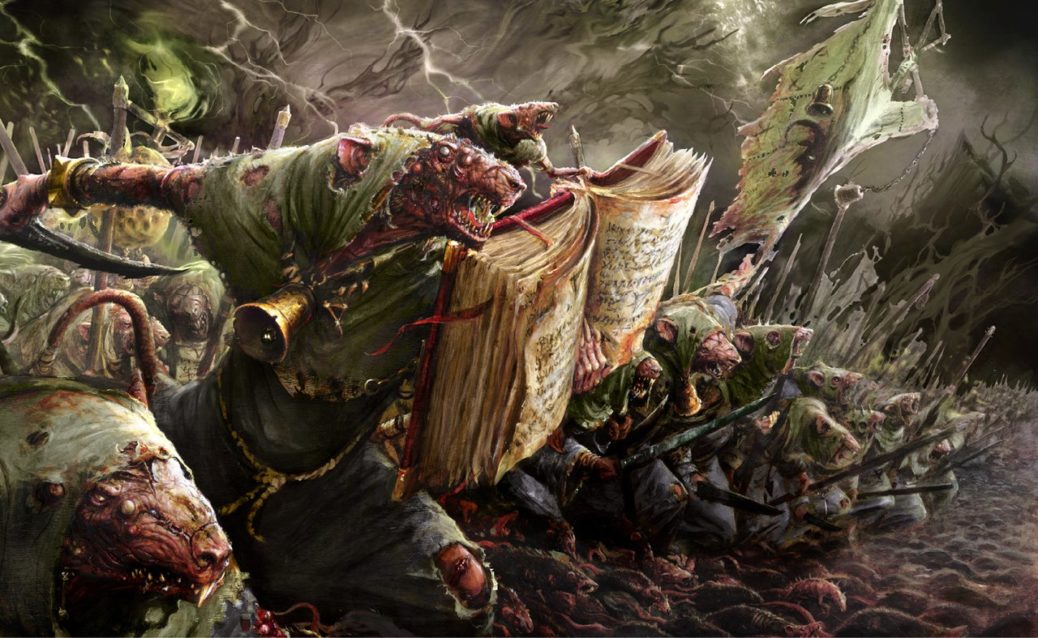 They moved as one, slipping through the earthen tunnels and caverns they knew so well. The contingent of doctorats, led by a single saint and accompanied by several hundred soldierats, scurried along through the dark, their silent steps unheard by none of the denizens of the expanses beneath the world. Jagged cryptoplasm blades hung at their sides, carefully bound so not as to accidentally cut their wielders. And so they went, on and on, passing amidst the dark, within a hair’s breadth of monstrous subterranean creatures and chasms that fell away into the untold fathoms. Theirs was a perilous way, but it was their mission, and it was this or death.

The Errata were merciless in their orders. Every rat present knew that their life hung in the balance of this mission. Returning would see them dead, but this way, they would die serving the burrow. Their leader in Consequence maintained a scrying eye from afar, knowing that eventually it would cut out as they entered anti-magicked terrain. They had not remained unaware of the events of the world above, always gathering information while the foolish man-things fought amongst themselves. As the pitiful creatures above drove blades of hatred into one another, the rats had toiled beneath, their network ever-expanding. The burrow on the Northern Continent had expanded at a frightening pace, so much that the Errata had crossed the ocean to settle new undergrounds. And right there, on the western coast of the Eastern Continent, they had found the Watch.

Immediately, the Errata had reacted with hostile curiosity. Who were these people, who so frequently gave loud, dramatic speeches, demanding things of a world that would of course never listen? It was plain to even the lowest of the labourats that Olde Watch sought nothing more than violence. Assassination, not loud demands, was the order of the day when someone needed punishment. So the Watch desired war, that much was plain. But what they desired didn’t wholly matter to the Errata; they knew that by the time the burrow-barge returned, bearing the spoils of all the worlds it had ravaged, the Watch might well have conquered Hellifyno and would pose an obstacle to Emperat Trak Soulflayer. That, of course, was unacceptable.

So here they went, the band of doctorats, now rising up through the winding paths beneath the earth, drawing ever closer to the surface. Before their final ascent, each Errat checked to ensure that their protective suit was equipped. The fearsome anti-magic could turn them back into rats for a limited time, or so they had been told by their informants, so they had developed gas-masked suits to keep out the vile substance. And then, drawing their cryptoplasm blades, they ventured forth, into the sewers of Olde Watch. As they went, they began their vile plot, sprinkling cryptoplasm dust into the waters, on any refuse they could find. Most of all, on the vermin they found down there. Specialized syringes of liquid cryptoplasm were produced and used to inject the rats full of the substance. They died in droves, writhing and squeaking in agony.

That chorus of squeaking rose as a quiet echo into the streets of Olde Watch. Only a few citizens stopped to wonder what it could mean, but most who heard the rats’ death throes dismissed it as workings of their imaginations and simply went on with their day. Below, some doctorats watched curiously as their mutations began to take place, altering the rats’ genes and beginning to transform into something far darker…

The rest moved on with swift purpose. Each one carried a bag of tools on his back, while the soldierats each bore a bag of supplies. The propagation of cryptoplasm as a mutative poison, while still not useless, was far less effective against the Olde Watch, who shielded themselves with Anti-Magic. To that end, the Errata had turned to more conventional scientific terrors, and now an even grimmer plot simmered in their criminal minds. While other gangs of Errata had moved on ahead to poison the Watch’s water supply nearer to their sources, this band’s purpose lay much closer to home.

Out in the port, several dozen feet beneath the waves, an Errat submersible discreetly chugged through the dark water. The rats within trembled nervously, their every sense aflame as they knew how close they were to danger and death. They made for the point of intersect between the sewers and the port, knowing – hoping – that their contacts would be there in time to deliver the product.

“Quick-quick. There is no time to lose-waste. Every second we spend down here, we risk-risk being found-killed!” The saint doctorat’s claws tapped against one another, his tail twitching impatiently as he set his underlings to work. The tools and supplies were removed from their bags and quickly set to work. What would have been scientifically impossible became easily doable in minutes, even with the worldwide reduction in magical capability. The saint had accounted for and practiced adjusting his output based on this new condition, and it was still possible… only just. The other doctorats hurried in their construction, not letting anything slip from their paws, as doing so might explode the lot of them and part of Olde Watch’s roads. But lo and behold, they were finished on schedule, and by the time the message came through the crypto-link that the submarine was ready to load its sinister cargo. For just a moment, the submarine surfaced next to the port, much to the consternation of those watching. What did this mean?

Below, a sewer grate that fed out into the port was removed with drills and saws, and the miniature nuclear reactor they had put together had been hooked up into the submersible, which itself possessed all the additional components necessary for the unconventional apparatus to function. Setting the doomed machine on an auto-piloted route, the Errata who had been driving it filtered out into the sewers to join their brethren. The disgusting sewer water was up to their waists, but it hardly mattered. They lived in conditions worse than these, and besides, their mission was all but complete. Sending the submersible on its way into the port waters, the Errata vanished back into the darkness beneath the world.

The underwater apparatus chugged along merrily, along to a place the Errata had identified as the weakest point between the sewers and the salt waters beyond. Furthermore, through clever excavations, they had opened the sewage water into the clean wells beneath Olde Watch. And now, as the seconds counted down on the cryptoboom they had charged and set on the reactor within the sub, all the cryptoplasm they had disseminated into the sewage would flow through Olde Watch’s drinking water and into the port, through the ensuing explosion… and that was without mentioning the nuclear disaster that awaited, just seconds away.

Ready or not, man-things, here we come.