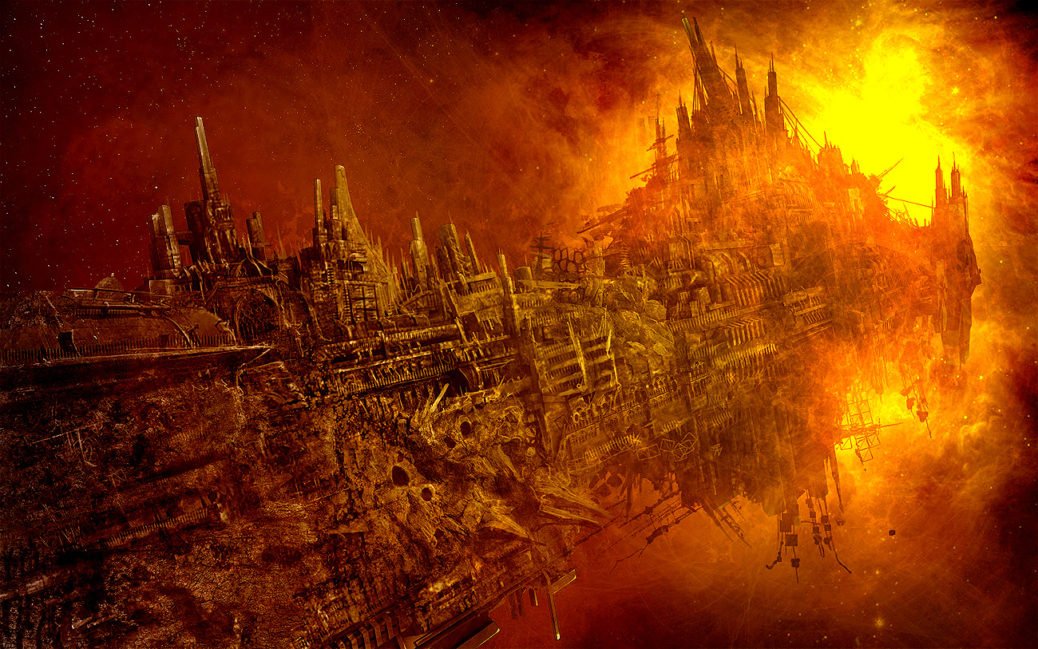 “You have been saying that nearly non-stop for the past few days, my Emperat. Surely this plan is jinx-doomed.”

“SILENCE!” Trak shrieked, firing off a twisting jolt at Rorskrit. The ten-foot tall berserkerat bore it without further comment, the desecration magic dissolving harmlessly against his flesh. Trak liked to throw spells at him, since he wouldn’t actually be affected, while the magitechnorat would be able to get a bit of satisfaction out of magically whacking someone. “In the light of what I have done-built, is it not right to gloat-gloat? Have I not earned that right?”

“You have, my Emperat,” Rorskrit conceded, looking down at the monstrous… thing they had constructed. It was astounding what a few billion working rats could accomplish within a few days; having utterly stripped the surrounding land of resources and the nearby towns of materials – which, in the Errata’s case, included people – they had laboured furiously under the direction of the inventorats and Trak’s hawklike supervision to put this grand design together. The farmerats farmed, the sorcerats magicked, and the labourats toiled, with Trak cackling madly all the way – and for good reason.

As the lumpy, twisted, ungainly mass of metal rose higher and higher into the sky and ever deeper into the earth, its intention grew clearer. The rough outlines that Trak had given his inventorats had taken coherent shape. Monstrous engines and rockets were built and wired. Hatches, pipes and walkways formed a mind-bendingly complex maze in the guts of the metal monstrosity, incomprehensible to all but the Errata who had built them. Its peak nearly reached the clouds, and on that peak stood the four Magistrats, along with the still-giggling Emperat.

“Is this wise-wise?” asked Sruchak quietly, already knowing the answer. It obviously was not. The Errata, in space? Without any prior experience doing so? The whole affair seemed like a recipe for a colossal distaster even by Erratic standards. Trak snuffled indignantly in response, his gauntleted claw enclosed around a solid orb of cryptoplasm that he hefted before him. In that smooth, blue surface, he saw reflected the stars in the darkening sky above them, and with them, the aspirations of him and of his people. Limitless, all-consuming, merciless and pitiless. And should they find anything among the stars, it would be devoured one way or another, as all things they had encountered on these worlds had been.

“Come-come!” Trak squeaked, re-opening the hatch through which they had come and scuttling down the pipe, which had been lined with recesses to allow for better grip. One by one, the magistrats came after him, clawing their way along to the enormous platform that was the construct’s helm. There stood a circle of magitechnorats, making the last few checks and magically balancing all that the sorcerats and inventorats had wrought. Deep in the walls and engines, the revv of power being channeled through cryptoplasm emerged as a faint hum. That hum set Trak’s ears twitching and his heart thrumming in his furry chest, as he stalked to the edge of the platform and stared off into the depths of his colossal machine.

Over one hundred billion ratmen stared back.

“ERRATA!” Trak squeaked at the top of his lungs, the harsh, high-pitched noise rebounding off the walls of the great building. “Far-far have we scurried, and hard-hard have we fought. Striven and fallen, again and again. Fate aims to thwart us, to kill us, and yet here we endure! The Errata live-live!”

“THE ERRATA LIVE-LIVE!!!” Returned a hundred billion voices, and still more boomed from beneath as the remaining rats poured in at the bottom, their own cries drifting up like great echoes. Trak smiled and continued.

“After all these disappointments, we at last have our road to the glory we so rightfully deserve! Through these tireless hands-” Here he raised his own. “-and through these powerful minds, we have built-built this path ourselves! Through our own means, the way-way is open! Feel-feel the pride surging through you! Seek-seek the destiny awaiting you! All together, we claim-take the stars as our own, and all will know our might-might!”

“ALL WILL KNOW OUR MIGHT-MIGHT!!!” Roared back the billions of harsh voices, with mounting eagerness. Now at last was the dawn of a new time, a new chance to seize all they wanted; for their great and powerful leader to bring them to victory. A glance over his shoulder told Trak that the magitechnorats were ready at last, and he turned back to his rapt listeners with a feral grin on his snout.

“Let the man-things of the void tremble at our approach! Let the fury of our guns and the hatred of our voices shatter the stars! Let magic rattle the heavens and war shake the galaxy! To the stars, Errata! TO THE STARS!!”

“TO THE STARS!!!” screamed the Errata, as thousands of cryptoplasm-powered engines roared to life one by one. The great metal thing groaned, its exterior creaking as the impossible power of Erratic sorcery and the vast mechanisms woven through the construct’s body strained to lift it into the air.

“Qreech!” squeaked Trak, bonking the old Arch-Sorcerat on the head with his staff. The wizened Errat looked around blankly before blinking at Trak uncomprehendingly.

Trak chittered with rage. “The burrow-barge! Flight! MAGIC! NOW!!!” A look of what might have been understanding – or perhaps bowel incontinence – passed over the aged Errat’s countenance as he tilted his head back, raised his arms, and let the frightening amount of sorcery within him explode outwards.

“COCK-A-DOODLE-DOO!” shrieked Qreech the Venerable, as the burrow-barge shuddered, creaked, and began to rise, leaving the ground beneath it cratered and twisted into an unrecognizable, mind-bending mess of radiated soil. With a triumphant squeak, Trak scampered across the platform to the vast control panel, where thousands of inventorats and magitechnorats were working to keep the entire thing from buckling and killing them all with cryptoplasmic energy.

“Yes-yes! Just as planned!” he cackled, doing that one thing where he rubbed his paws together villainously. Rorskrit sighed resignedly. Sruchak covered his eyes in despair. And with one last BOOM from the multitude of engines, the burrow-barge pierced the atmosphere, and lunged out into space, moving through the blackness like the immense hunk of metal it was. Ugly, ungainly, but more importantly, very functional.

Through the miracle of cryptoplasm and the vision of one crazed rat emperor, the Errata were starbound.