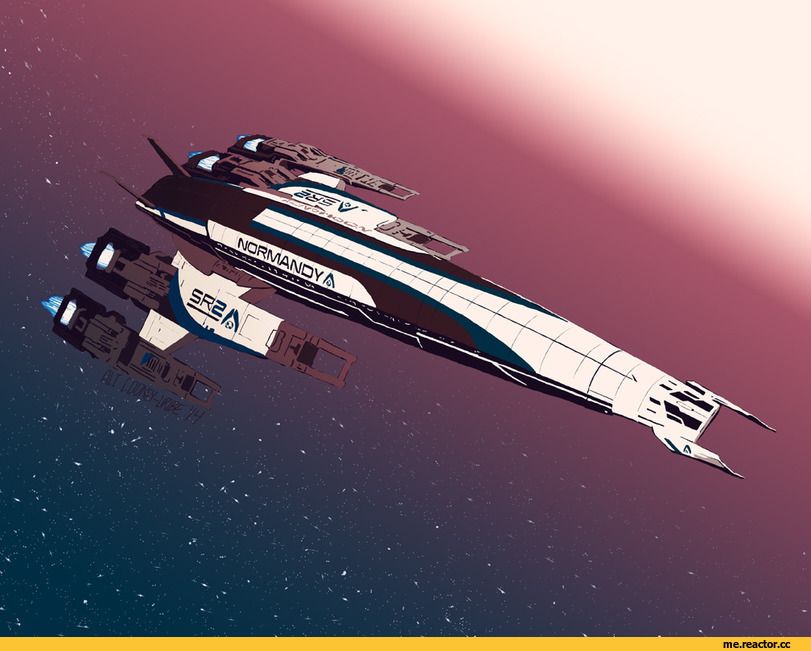 From the inside out, the ship’s interior hull is composed of a poly alloy of Iron, Iridium(A hard, ultra-dense metallic element that is highly resistant to heat and corrosion) and Titanium-50(A high grade titanium that was specially strengthened at the molecular level). Over that is honeycomb frame of Laminasteel, filled with plates of Tritanium, tested and proven to be 21.4 times harder than diamonds; with heatsinks under the Tritanium for stealth purposes.  The other hull is a three meter thick plate of Vibranuim, which specializes in absorbing, storing, and releasing kinetic energy in a controlled manner. Painted over the metal is a stealth ablative coating.

Shielding
The Black-Light Shielding System:
A field  of a multi wavelength, polymorphic, energized particles (light, radio, and radioactive) that seals around the Gabe-I-El in multiple hexagonal planes of light.  The shield has three modes, passive mode that blinks on local shield planes when threats are detected. The second mode is active mode; it turns on the shields to max capacity. The BLS slaps away rather than halting linear force. By rotationally acting the shield generators, the ship creates rapidly oscillating kinetic barriers instead of static ones. Shooting through the BLS is like trying to shoot at a target inside a spinning ball. If an emitter is damaged, the BLS corrects to become a traditional shield array. Lastly is the stealth mode, working in concert to make the ship invisible.

Stealth
The ‘Panther’ Stealth Sub System:
In order to provide stealth to the ship, this sub system works contains a fleet of programs that work in concert with other parts of the ship to engage a ‘Silent Running’ mode.
-Specialized Wavelength Generator – Produces a wavelength to allow the Black-Light system to ‘bend’ the light around it to produce a mode of invisibility
-Stealth Ablative Coating – A semi-liquid that makes to allow radar and sensor waves to ‘bend’ around the ship to produce a mode of invisibility vs. detection systems.
-Counter-Electronic Systems – A dozen virtual intelligences are programmed to feed false signals to other detection systems.
-Heat Sink Technology – Specialized heat sinks are hidden under the hull of the ship and are able to temporarily sink her heat within the hull. Combined with the refrigeration of the outer hull, the ship can travel undetected for hours, or drift passively for days. Eventually the heat has to go somewhere, or could dangerously filter into the cabin.
-Panther Drive Core: Allows the ship to move around without admitting heat.

Propulsion
Sub-Light Impulse Drive:
The primary component of the drives is an inertial electro static fusion reactor, which generates plasma that is channeled into a series of exhaust manifolds, which vector it into the ships engine nozzles. The drives exhaust serves as the reaction mass, providing the main propulsion to the ship.
In addition to the fusion powered main drives, the ship also utilizes smaller rocket thruster using Triamino hydrazine as propellant for small-scale maneuvering.
A secondary, back up ‘Panther’ drive core generates concentrated fields of mass that allow the ship to ‘fall into’ them, allowing the ship to move without the use of heat emitting thrusters; and it also allows it to run at FTL speeds for much longer without having to discharge the drive.

F.T.L (Faster Then Light)
Panther Sprint FTL Drive: This engine was created by using three different sciences in tangent to boast one of the fastest F.T.L speeds on Hellifyno. First the PS-FTL is powered directly by the Panther Drive Core, which generates a mass effect field around the ship that reduces the mass of the vehicle that would allow longer distances and easier maneuvering.  Second it triggers a broken down optimized Shaw-Fujikawa translight engine that tears open an event horizon (wormhole) to another Slipstream Space, or Subspace. (

) Lastly was the warp field generator, which altered the mass effect field around the ship; allowing it to ‘ride’ the waves of the special disturbances and ‘surf’ through Slipspace at FTL speeds.

Weapons
– Sentinel Point Defense: A battery of short range anti-missile and anti-fighter point defense lasers.
-Torpedo Launchers(x2): Located on the points where the wings meet the ship, there is a launcher on either side that can fire various payloads such as Disruptor: Unstable mass effect fields that warp space-time in a localized area, the rapid asymmetrical mass changes cause the target to rip itself apart. Nuclear, EMP, Etc.
-Mark II: Light Coil -56A2D4/MAC(Or just Mini-Mac): It fires lighter projectiles compared to most other MAC’s, but these rounds work much like shredder rounds. Due to extra power capacitors and power recycling systems, the Gabe-I-El’s MAC could fire three times in succession
-M66 Phaser autocannon turrets(x2): Phased Array Pulsed Energy Projectile. While it looks like a beam, it is actually a stream of discharged pulsed energy projectiles into the target.

Internal Layout
To move from deck to deck, there is a lift. As a secondary system, ladders connect each level
Deck 1: Captain’s Cabin 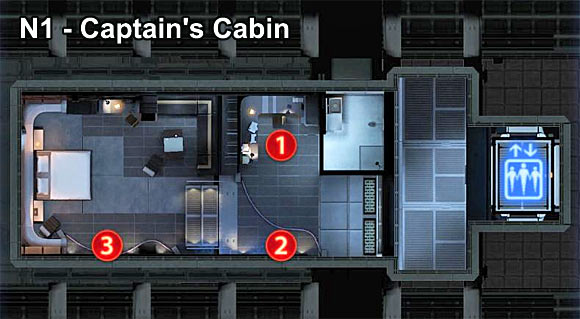 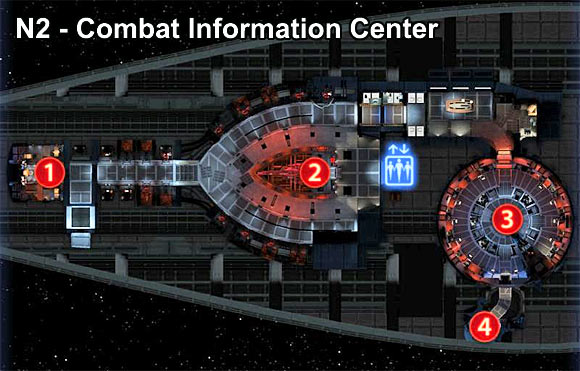 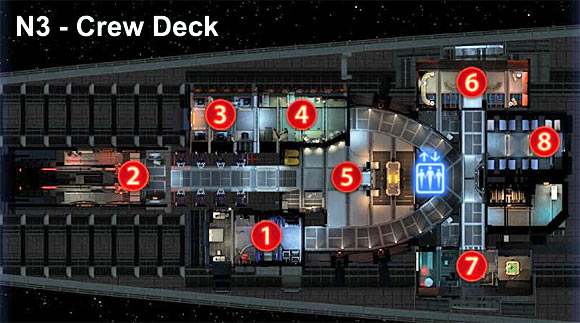 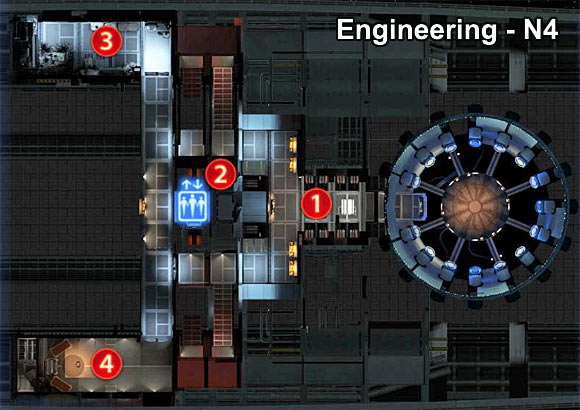 1:Engineering
2:Stairs to the sub level
3:Starboard Side Cargo
4:Port Side Cargo 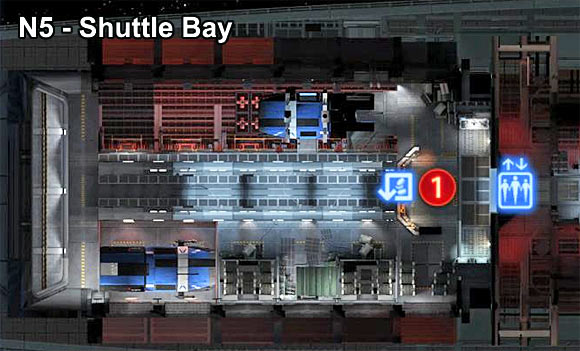 1: Secret hold. (Every ship has got one and its for transporting less than legal goods while traveling through a policed area)

Other
S.T.A.R.S System:
The Stealth Tactical Aerial Reconnaissance Satellite, or STARS for short, is a piece of versatile technology employed by the Gabe-I-El. They are capable of being fired in Slipspace, and able to exit at pre plotted points(while the STARS does have the homing, black box feature; they are incapable of entering Slipspace). Baseball seized satellites remain in orbit around the target (planet, ship, station) and provide in-field unmanned, covert communications, topography information, enemy locations, allied locations and equipment positions to the HUD of allied units in range.
Spatial Control Pylons:
When activated, these pylons disallow the artificial ripping, tearing, opening, or closing of space within the ships interior. Teleporting, phasing, or otherwise entering the Gabe-I-El is impossible; and any attempt while the device is active places the trespasser directly outside of shield range.
Crybaby System: Multiple beacons that replicate the Gabe-I-El’s flight transponder/F.O.F. Capable of short SlipSpace jumps. They short out once they run their course or is captured by anyone but the Gabe.

UT-47 Kodiak Drop Shuttle: A personnel carrier capable of planetary flight and is capable of limited FTL. It can carry up to 14 people, and its systems are enough for a V.I. It is a true contragravitc vehicle, as its eezo core provides a mass effect field that completely counters the ships mass; as its small thrusters are for direction only. It forgoes any form of offensive weaponry for active masking, electronic countermeasures and a Mini Black-Light shield system

ND1 Nomad: An all-terrain land vehicle focused on exploration. The Nomad features twin hydrogen-oxygen fuel cells powering an eezo  core, independent suspension for each wheel, and interchangeable four- or six-wheel drive. . It also comes equipped with a rear fuel injection booster to propel it forward, and H-3 micro thrusters beneath the vehicle to blast it upwards. The Nomad has onboard sensors to scan the planet for valuable resources.
Nomad Upgrades:
-Mini Black-Light shield system
-Thrusters (Max speed 200 km/h)
-Radar(75m)
-Life Support(Advance power cells can generate a mass effect field around the Nomad to shield occupants as they are exit the vehicle for a few moments.)
-Agility Mode (Allows the Nomad’s stability assist  to be deactivated, allowing greater range of motion for less traction)

Forward Stations: These devices are placed on unfamiliar planets as a way station for anyone of the Gabe-I-El. Each station is equipped with a suite of recording software and hardware for not just video and audio, but air samples, dirt samples and seismic senses; so it can reveal valuable resources better than the Nomad.  Along with that it acts as a large supply box for restocking on ammo blocks, power packs, there are even a few weapons in case one wants switch here. The most impressive is the little drone at the top of the station, dubbed FIX-IT, with the schematics and ability to fix any crimson weapon, armor, or vehicle