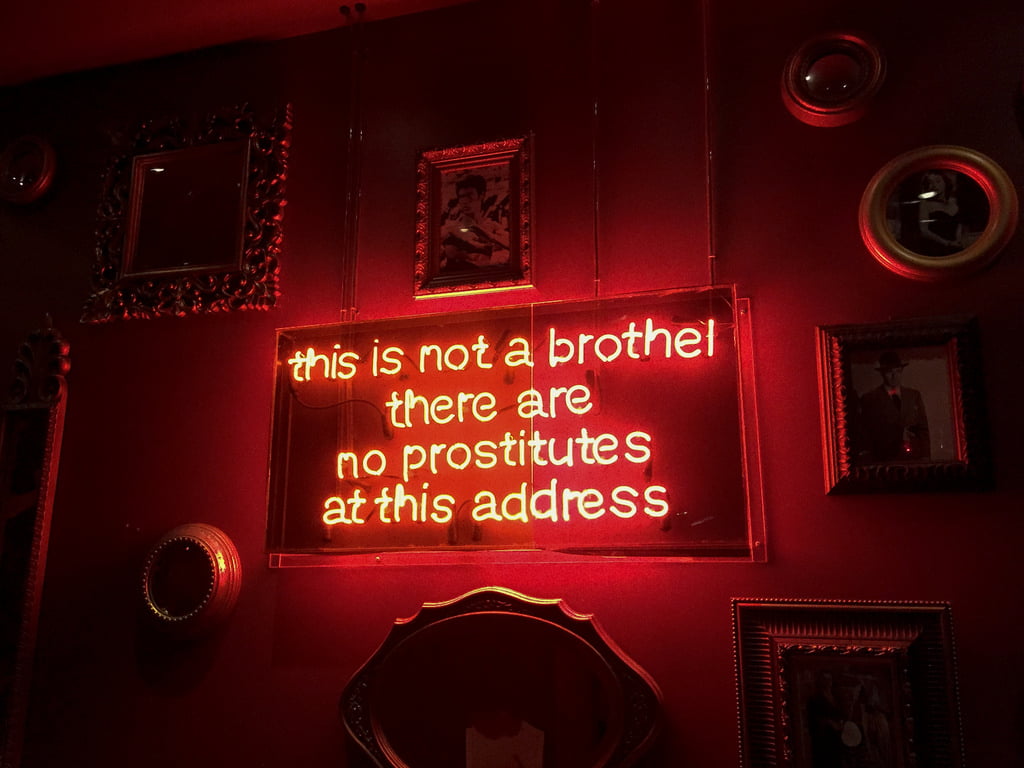 The Doghouse: fill your bowl.

The words blared out across the street in the form of a sour candy apple green neon sign, joined with a cheap tagline that looked better on a box of cheap brand dog food. Everything about the building screamed cheap, foul, ruined straight to the core. Once, the now whorehouse equivalent of a dive bar had snagged the eye of every passerby and drawn them in with nothing but a muted beat and the allure of nights of passion and temptation driven-euphoria.

Now though? It was merely a shell of its former glory. The music had died, the paint on the walls had dried, chipped and flaked away to reveal the dusty white, mold riddled drywalls. The floor, a once reflective black and gold marble, was now just cracked, dulled, sticky, and fouled with stains and marks that made the mind scowl in distaste.

The decor was no longer white and gold marble statues of women in positions of pleasure; frozen forever with bliss etched into their immaculate features- no, the statues were nothing more but broken busts. One lacked a head, some lacked arms, one was nothing but a hand between clenched thighs. Even the blood red ribbon curtains that’d once acted as screens of privacy were now so moth eaten and torn that every act of sin was more or less an exhibitionist sport more than anything.

A lack of customers meant a lack of money, and a lack of money meant staff had upped and left the Doghouse to that of the dogs themselves. From the bar staff to the very whores that brought business in the first place. Nowadays, the Doghouse was just another cheap, high-roller wannabe. Instead of dancing or trying to lure in the stray client, the remaining men and women -strapped to the whorehouse via debt- didn’t even try to tease or attempt. The allure was gone, the desire? In the same state as the whorehouse itself; faded and now nothing but a lowly attempt at business.

Even if a customer did enter, they found themselves with the amateur and the jaded. The newbies who wanted a start in the world of sex and sin, or the weathered; downtrodden and only stay due to the near literal shackles that held them there.

“And to think, this place used to house high prestige…” A disgruntled customer of the Doghouse expressed his distasteful thoughts aloud as he zipped his fly and buttoned the waist, seemingly unaware of the woman clutching torn black silk bed covers to her pale form, panting softly. “How the mighty fall.” His voice held a hypnotic pull to it; a light Scottish accent mixed with the comfort of warm honey yet layered with an educated sharpness.

“I’m s-s-sorry-” The woman weakly stammered out, still on the cusp of catching her breath. Her name was Jeanne, a vampire bound to the whorehouse by an act of misfortune and a debt that could never be wiped by her own hands. It was a shame, for rare, pure-blooded, redheaded beauty and with a set of piercing claret optics -and a body that men would kill for-  to be trapped in a cesspit.

“Don’t be,” The customer replied in a most nonchalant tone, buttoning his shirt in front of a cracked mirror. “You were…” A smirk prickled up at the corner of his mouth as he reached down and plucked a black suede jacket from atop the pile of discarded clothes before his legs pushed him onwards to the door. “Let’s just say: I’ll be sure to leave a tip for you.”

As the door closed, the soft, muffled whine of disappointment merged with the clicking of the lock yet the customer couldn’t hide the broad grin that nearly stretched to his ears. The ego flared for a moment and a chuckle aired itself in the body strew hallway as he began to walk. Oh, how he still had it.

The business was that of simplicity: murder, well possible murder. He hadn’t solely come to the Doghouse to satiate his personal desires, no. There was a professional edge to his actions; takeover. There was a reason he emptied the last of his pocket on probably one of the most expensive whores and a private room. Instead of letting the Doghouse literally fall to that of the dogs, he felt like it needed a fresh coat of paint and a change of hands.

To find the current owner’s ‘office’ wasn’t exactly difficult; a matte red door with two hulking thugs in ill-fitting suits, sitting at the end of the hallway. As the customer weaved his path over and past the many partners writhing within the realm of drug fueled pleasures, he took a slight note of how every man and woman held a blue-ish glow to their veins.

The cries and moans seemed over-exaggerated, far too high in pitch and in pleasure. An aphrodisiac?  Stepping over two bodies writhing on the cold, crack floor, he couldn’t help but shake his head at the ear piercing cries from a man; pressed against the wall of the hall, a woman with her head between his legs, twitching and spasming in the final throes of life; overdosed on the unknown drug, the veins in her neck and arms a solid, navy blue.

For a moment, he moved to intervene, to calm the man yet he could see in a single second that the cries were not of sorrow or pain but pleasure. The man didn’t know his partner was dead and merely proceeded to grab a handful of the woman’s hair, solely to continue the act of pleasure he’d received moments prior.

A grimace flickered it’s way over the customer who’d laid with the vampire, his eyes averted from the more morbid sight and swiftly locking on the end of the hallway as he continued his approach. The door seemed flimsy, rotted wood painted over. Not exactly a difficulty in regards to entry. The brutes in suits though? They could be more than a problem. Words would be far more civil and more preferred over violence, however…disagreements would more than likely lead to fists.

The customer started, layering in the honey-esque catch to his accent. The welcoming, warm tone as he stood before the guards; arms tucked behind his back, presenting the air of a more contained and collected door to door salesman.

“You don’t mind if I have a chat with your employer, do you?”

One of the duo stepped forwards; a scarred face man, lightly tanned, with an odd pair of orange eyes.

He looked like he could take more than a punch as he seemed to house a frame of sheer, bulging muscles.

“Sir, I’m going to have to ask for you to return to your room.”

The scarred man said, his voice holding an unnaturally soft Irish brogue despite his stature and general build. His hand was outstretched, as if trying to soothe an upset child.

“Boss ain’t talkin’ to no one tonight,”

The other brute said, words lathered in a thick British accent; South London.

The man was an African-American; scowling from behind his collegue, one arm already moving to pluck whatever weapon he had nestled within his coat. The scowl was fierce, laid down by piercing pale blue eyes that were backed up with startlingly soft features. The man had muscle, yes but there was a frailer look to him.

The brains to the brawn?

“Morty, I’ve got this.“ The scar-faced man said through his teeth.

“I’ve. Got. This.” Gene said through a locked jaw as he turned back to scold Morty with an apparently vexed glare. “Now-“ Turning back, Gene’s face contorted into a mixed mask of amusement, confusion and grand irritation.

The customer was quiet; still sporting his smile that could sell a block of ice to even the coldest of eskimos. Neither Gene nor Morty could narrow down the smile to some form of facade or if the man merely found their open aired tête-à-tête. However, the source of Gene’s mixed expression was solely down to the customer with an outstretched fist; a single gold signet ring glinting.

“See this?” The customer said -still as calm as ever- tapping the ring with the tattooed left index. Engraved on the simple ring sat the crest of a house: a hound in mid-flight, a pair of wings, filled in with silver, burgeoning from it’s back. “You take a nice look at that and tell me what you see.”

The curiosity of Gene and Morty was clearly strong enough that the two of them, lacking any form of guard, leaned forward enough to get a clear enough look at the ring. Morty having to squint some as he did.

“With wings?” Morty finished, his asked answer seemingly filling the space with the collective caution and curiosity of himself and Gene.

“That, gentlemen, is the crest of the House of the Winged Dog,”

The customer still kept his tone collected as he lowered his arm, still smiling; his total composure slack in all tension, compared to the upright and rigid nature of Morty and Gene. “One of you can tell Mr. Donovan that a representative of the House is here…if you’d be so kind.”

For a moment, both Gene and Morty shared a single look that seemed to scream out a silent ‘What the actual fuck?’ yet the customer’s general tone, his casual posture, the genuine lack of intimidation in his words, it gave off an air of -strangely enough- comfort. The man hadn’t moved an inch. He hadn’t tried to jump the two and he hadn’t come tearing through the hallway with a gun.

Gene and Morty didn’t like the man, but there was a strange admiration to be so relaxed in a whorehouse where the wrong look could easily end in a missing eye, or said eye socket being used for…someone’s stress relief.

Morty turned, glancing over his shoulder for just a moment before he pushed the red door open slightly. The gap was minute, nothing more than an ajar opening to allow the brute to simple poke his head through. He nodded once, twice and a third time before turning back to Gene and the customer.

“You jokin’?” Gene asked, confusion spreading across his face like a rash.

“He say fuckin’ wh-” Gene found himself taking up a silence and an infuriated glare as the customer calmly slipped in between the two men.

“Gentlemen,” the customer said calmly, cutting into the second open to the public tête-à-tête. “I’ll leave you two be.”

Gene and Morty stared at the man as he calmly slipped between them. Gene moved forwards. With an arm outstretched, he aimed to snag the collar of the customer’s jacket yet a swift hand on his chest from Morty merely forced him to lower his hand, muttering softly to himself as he watched the customer vanish behind the red door.

“Don’t worry Gene,” Morty said with a grin slowly stretching across his features as the door closed. “Give him five minutes and we’ll be haulin’ out a body with something missing.”