Home The Hunger within 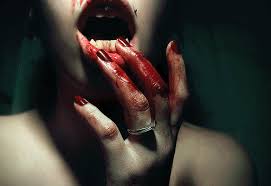 As kida stands in the window, staring at the trees swaying in the wind, one arm casually wrapped below her chest. And the other resting, bent as she runs her thumb over the cigarette butt. She exhales the puff of smoke as she moves to sit in on the window sill. As the cool fall breeze blows in gently it pushes back her short hair. She closes her dark hued eyes as she just stays quiet. While enjoying her peace, her house imp Trink pushes open the door. Waving a letter, a mortified look on his face. The small creature is shaking as kida places the black cigarette between her soft pink lips, and takes the letter, opening the envelope with a quick swipe of her nail. She removes the paper and unfolds it, her eyes skimming over the letters that are written.

“hm. What does this man want now!” A smile tugs at the corner of her lips as her eyes dart over to Trink.

Kida moves over to her closet, a fresh new wardrobe fills it from corner to corner, she moves a few pieces of clothing. Stopping at one, she smiles and nods to herself, “this will do” she thinks to herself. Taking her smoke and ashing it, she grabs her under garments from a dresser and a pair of heels, laying the clothes on the bed she turns, puts her smoke out and heads to shower. After a couple of minutes, she comes out, hair dried and straightened, a little make up on her face, even with her new scars that cover her body, she is still tone and rather stunning, she moves to the bed and pulls on her panties then her bra, adjusting it so her chest sits just right, then she moves, sitting down on the bed, and grabbing the dark black dress, its skin tight and stops just above her knees with a slit up the back, it hugs her curves, and accentuates her chest. She steps into it and pulls it up. Small strips of fabric hang around her arms. Trink stands behind her and zips it up, she then sits down and pulls on a pair of black, close toe, heels that have a small silver butterfly painted on them, she fixes her hair and then moves out of her room, down the stairs. As she opens the front door a car pulls up. The driver, being a short and rather hideous fellow moves and opens the door. He doesn’t speak just waits, kida slides in as he closes the door.
Once the driver gets back in they take off, driving for a few minutes. She stares out the window and then pulls out her cigarettes, lighting another one as she breathes in the sweet aroma that it gives off. Within a few minutes a portal opens and they drive into it. On the other side they pull up to a large grey and blue mansion. Surrounded by vibrant flowers and trees. She moves up to the door and uses the large knocker to let the people inside know she has arrived. A few moments and a maid, rather young with a sweet face opens the door, she too doesn’t say anything as kida walks right by her and into the study. She takes a seat on one of the leather couches and crosses one leg over the other.   A man walks in wearing a black suit and grey tie. His soft green eyes stare at kida as she watches him, her eyes are hard, cold and dark as he sits in his chair at the desk.

“what do you want Jerrico,”The man smiles at her and laces his fingers together as he rests his elbows on the desk top. “Now Kida. Why do you always think I want something.” His tone is sly and calm as another grin spreads across his face.

Kida simply rolled her eyes and within one quick step she is beside him, resting her body against the desk. This man always wants something. She was his backer for the longest time. He wouldn’t be who he is today with out her. She leans closer to the man and whispers in his ear.

“You still owe me quite a bit of money Jerrico. Why should I loan you more. You have this house, and all these people. Give me one reason to give you more. You’re a leech, a useless money sucker.”

As she talks a low rumble erupts from her throat, its been a while since she has fed on clean flesh, its not something that she likes to talk about but it does need to happen and this man.. well he picked the wrong day to meet with kida. As she whispers he grins more, turning to face kida. And planting a deep, wet kiss against her lips. She leans in and kisses back. The urge not to kill this man settles.. for now.. he wraps one hand around her back and pulls her so she is straddling him. His kiss still distracting her ravenous and deadly mind. Was she really turning back into the old kida. The one that was just like her mother….. that thought only linger for a few minutes as the man in front of her moves his hand to the zipper on the back of her dress, pulling it down she breaks the kiss and starts to undo his tie and buttons on the white shirt. What was she doing…. She didn’t care at this point. He pulls her dress down to her waist and plants small kisses over her collar bone. Kida pulls his shirt off to reveal a muscular, toned abdomen. She kisses along the side of his neck, her eyes dim more as the killer instinct within her starts to turn.

This feeling has stayed dormant for so long, but after the death of her old body, things started changing. She bites gently as her teeth grow sharp, a set of long k-9’s appear as she skims them over his jugular. His heart was racing. But she couldn’t drag this out for much longer, his hands move to unclasp her bra as she sits up and smiles. Her cold, dead eyes stare into his bright, lust filled ones. She would only go so far before the hunt would be on. As his hands move to pull her bra off she leans over and without another word she bites him, sinking her teeth deep into his neck, biting harder than normal. Flesh is a tough one. The man flinches and then coughs. He shoves her off as part of his neck is torn open. His eyes now filled with fear as kida stands up, dropping her dress to her ankles, she wipes her mouth as his blood drips from her jaw, a wide grin plays over her face as she shakes her head.

With her last word kida shifts into the large 9ft tall, dark black, shaggy wolf. Normally she is gentle but once in a while she does require a kill. And what is the better than hunting down garbage only to eat it. The man stands, clutching his neck and shaking.

Kida snarls at the man as he coughs up blood. He turns and moves from the room.. and the hunt is on. He doesn’t make it but only a few feet outside as kida comes barreling after him. She needed to at least give him a chance… she leaps out and grabs the man around his torso with her jaws, and in one, swift bite his spine breaks. He screams out in pain and then goes limp.. and kida enjoys her dinner. Once done, Kida move back inside and wipes her face with his shirt, sitting in his chair she turns and picks up her dress, pulling it back on and licking the fresh blood from her fingers. “mmm. I feel better.” She smiles at the thought.. the maid and butler are outside cleaning up the mess. After wards kida orders them to return home and that they wont be needed anymore. The car from before pulls up and kida gets in.

The driver nods and they leave. As they drive kida wipes her face a little more and then fixes her hair and make up. As they pull up to her home, Trink comes out holding a black binder, she opens it up and tears out a file. Handing it to trink she goes back inside.