There’s a certain liberty about the word ‘prehistoric.’ Most of the time it’s used by people as a reference to the era of the dinosaurs but there is in fact a larger means to it, you see there was a lot of history on Earth that greater forces wanted to be forgotten. Once such instance was the era of the Colossal’s. Giant figures who not only roamed the world but near enough ruled it. Nothing was above a Colossal on the food chain & it took an entire army of humans to take down just one, even then only a handful of the soldier would return.

During this time there were many great kingdoms who ruled the realm of humanity fairly, world peace amongst the mortal men & women had been discovered out of pure necessity in order to survive the whims of the titanic beasts that roamed the Pangean remnants. One such kingdom was particularly notable, it was named Atrega after its ruler, Regas. Regas was the kindest of all the monarchs who would attend the birth celebrations of the poorer families of his kingdom & bring them a gift of a wealth sum to support their new child. He would officiate weddings of people others may have considered unimportant & would dwell in taverns that were miles below his royal status. Being a truly kind soul Rega was also the only leader on the Council of The Kingdoms opposed to the plan to wipe the Colossals out & extinct them but such a thought was so outrageous that every council meeting it was brought up at resulting in rigorous debate & this one was no different.

“Are you completely insane Rega?!” The Jade Empress, Son, shouted out, “How do you expect us to work with those things? They wipe out crops & cattle, destroy villages & townships like their nothing & for what reason? None!”

Others of the Council would nod in agreement with Empress Son but Rega wouldn’t have it. “We don’t know that it’s for no reason but we do know that when they take our cattle & when they take our crops they are doing it to eat them! They need to eat as well & a hefty amount more than we do!”

“So why would we befriend them if it meant not only do we have to feed our kingdoms but also these mountains? Our farmers can’t handle such a task,” Spoke up Grand Pope Marcius which was also meet with agreement.

“Face it Rega, you are a good man & we all can see that but somethings just don’t solve peacefully & this is one of those things.” Son was smiling gently but hiding her sadness for the man. A lot of the Council secretly agreed with Rega for some reason or another; Colossals could be used as weapons, defences, farming & mining tools, builders. Hell even their friendship alone no strings attached would be better than their current predicament.

Defeated, Rega was silent the rest of the meeting before going home to their kingdom. However on the journey back he & his party are forced to stop & move to the cover of a nearby treeline as just a short distance away a colossal stands up, shaking the ground as it does. The mighty giant was a skeleton bleached white by the sun & snow & moved slowly, a lumber walk of a creature that shouldn’t even be able to stand but defies the science of man. Rega, determined to make a point walks out of the cover of the trees with sceptre in hand & stands in a wide clearing as the other monarchs & leaders look on in horror. The kind king raised his arm & his voice to the beast.

“Hail! I am King Rega of Atrega, I request an audience Oh Titanic One!” His voice carried across the land so loud it might have come from the colossal itself & of course, the colossal heard. It’s might skull turned to face the speck of black against white snow, recognising it to be human. It thought for a moment to ignore Rega but instead turned & moved towards the king before lowering down so its head sat only a 50 feet from Rega’s own.

“What do you need so much you’d risk a kingdom?” It said in a voice that grated like a pick on stone, the loudest whisper any in presence had ever heard. Rega looked up without an ounce of fear in his eyes & responded with a voice fit for his status,

“I wish to put to put this feud between our people to an end. Violence will only end in us all being losers of this war,” the words he spoke came from his heart & though he was no poet he knew those words to be true. “I propose an alliance, one where our people offer you what we can & in return you allow us to live our lives out of your way.”

The colossal skeleton peered down with empty sockets at the brave little king, “That deal sounds like it benefits humans more than it does us. What a waste of time.” Then within no time at all the skeleton rose back up to its full height & began to walk away but as it turned it made a powerful point. Beneath the toes of the god-like creature Rega was crushed into none more than a red pulp, causing the other monarchs & leaders to go into outrage. Once Rega’s body had been collected & buried they spent a long time preparing a war, & go to war they did. With every kingdom on board they hunted down every & any colossal they came across as the giant beasts were no match for their combined armies acting as one. Soon there was only one colossal left; the skeleton. The monarchs ordered the army in a way that made it suffered, soon after forcing it to pieces & destroying each bone in front of it as all it could do was watch having been reduced to nothing more than a skull. It screamed the whole time & never stopped screaming, so loud & so enraged that a God descended from the heavens & drove a spear through the skull, silencing it eternally.

When the strike struck the ground though the skull all the humans on earth simultaneously fell into slumber & that way they would stay until they died, wiping all living memory of it ever happening. Thus, history forgot the Era of The Titans & the Legend of King Rega forever… well until now of course.

“Uncle Archie, uncle Archie, did that really happen?” A bright eyed face looked up into the scribes face, glistening blue eyes filled with wonder as the book was returned to its place on the shelf.

“Well, maybe. Some stories are just a mystery & some times that’s what makes them so good.” The scribe looked down at the kid with a soft smile as–

“ARCHIBALD! BRING ME BOOK 77,625!” A voice rung through the Library, a soft Greek accent sounding harsh in the infinite corridors & aisles. Archie chuckled & ruffled the hair of the kid he had been reading to,

“Run on home now, I need to get back to work.” The kid hugged him then ran off through an open redwood door as Archibald hunted for book 77,625.

| Hey there! If you got this far then I’m either a decent writer or you were really bored. Anyway, thanks for reading!! It means a lot, I’m trying to improve my skills at creative story writing & each story will be a chance for me to grow so please leave any critiques, or compliments maybeee, wherever it lets you do that as it’ll help me grow! I write these stories based off of concept art pieces I find that I really like the look of. For this story it was the one I’ll add below, I couldn’t find the name of the piece or the artist but I think that mystery adds to it’s ambient vibe | 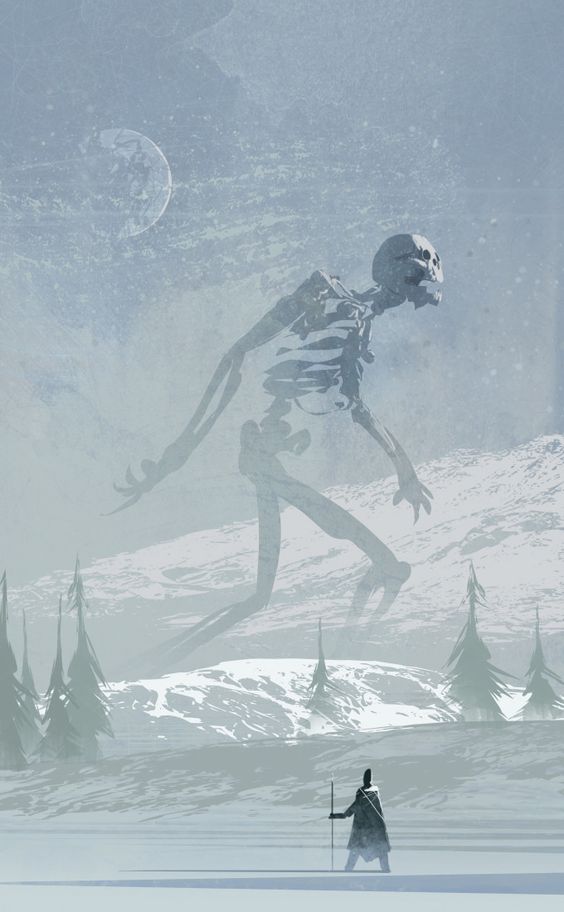