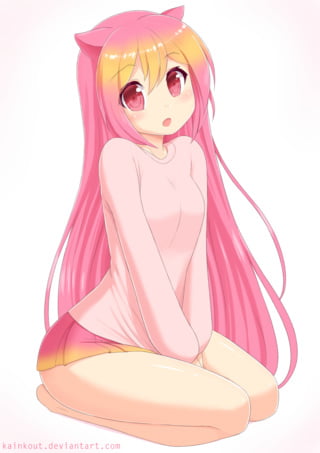 In the forest on a bright sunny day a song can be heard. It’s a happy song but to some a familiar one. The voice was different but it was if someone was singing though her. Further into the forest the voice is followed to its owner. A small neko with pink hair and pink eyes can be seen foraging in a bush.

Every so often she would stop to say “it’s to ripe” or “ewww squishy”. Neko is checking all the berries that she is picking and placing them into a hand woven basket beside her.

You would expect a cute lovable neko but this one is covered in mud from head to toe. You only know she has pink hair due to the rain the night before. This also made the ground below her all muddy so she was already starting to get all of the mud back from before the rain.

Once this Berry bush was empty of all its good berries. She gets up and stretches. She smiles brightly looking up at the sky. “This life is perfect don’t you think?” No one with a connection to the forest would hear the voice agreeing with her. Neko giggles and picks up her basket to go into a nearby cave.

Upon entering the cave, the nekos eyes quickly adjusted to the darkness due to her having cats eyes. She zoned in on why she was here. The mushrooms. She giggles and runs over to them. She places the basket down and kneels down on the stone ground to start picking them. Again she didn’t want to pick bad ones since she needs them fresh. She goes back to singing  while the animals of the cave just sit there watching her. The territorial animal being the wolves did not seem bothered with her being there.

When she gets back up she picks up her basket again that was getting full and walks out of the cave. The song seems to not have an ending but neko didn’t care while she walks to the centre of the forest where what looks like an ancient tree stood. The tree towers over all others and radiates of magic and life.

She suddenly stops. She tenses up a little. She turns around and you see a big blush on her cheeks. She had just noticed you had been following her. She speaks in a nervous voice. “H..hello!”