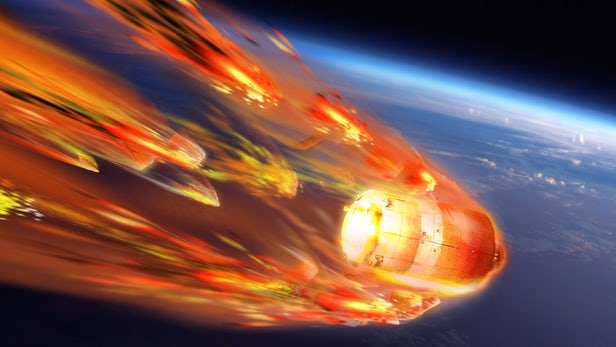 The space above Hellifyno was in a state of tranquil peace. Satellites and space stations orbited at their leisurely pace above the immense planet, clouds drifting over its surface as the system’s star blinked brightly behind the obscuring object. Thousands of lights sparkled in the inky depths all around, hints towards what lay out there beyond this tiny portion of the galaxy, while larger masses drifted at a snail’s pace in the background. Those planets were slowly garnering greater attention as of late, as Hellifyno’s population took the step to explore and see what was out there. Unknown to them, there was someone else taking that very same step.

The deep silence of space was torn apart in a single moment as something suddenly came into being at immense speed over Hellifyno’s air space. The object crackled in a cylinder of white and cyan energy, a cocoon of protective light that fizzled out over the course of a few seconds. The form revealed from the resulting cascading aurora was that of a space-ship, one of a roughly sleek and cylindrical design. It was of no local design, that for was certain, the technology divulged from tech adopted or invented by Hellifyno’s inhabitants.  Windows adorned the front of the ship as well as a viewing dome at the top, a turret was mounted underneath the ship’s nose and large repulsor type propellants glowed with power as the ship crept onwards to the nearest planet.

What was odd though was that numerous blast marks and plasma burns decorated its hull and one of the vanes mounted upon the back had been torn off. The ship spluttered, fires breaking out and smoke pouring from the ship’s vents. The repulsors began to blink on and off, further decreasing the craft’s already slow pace.

“I thought you said that they missed us!” cried the pilot as he looked at one of the digital displays that quickly popped up with plenty of ‘Warning’ and ‘Danger!’ signs indicating how many and which parts of the ship had been damaged; to him, it seemed like everything except the kitchen sink was damaged by the looks of it.

[Correction. I said they missed You. You are still alive.] Rang the feminine yet electronic voice of the ship’s on-board A.I system.
“Yeah, but they hit the Ship! I am On the Ship!” the young pilot argued with the A.I. He’d traverse the different windows of the computer terminal, wrangling with the unfamiliar software to see if he could get any useful information. “Is it possible we can get some repairs?”
[Affirmative. If you were a good enough engineer.]
He wasn’t sure where to look to give this computer a glare of sorely being unimpressed, so he’d direct it towards the screen he was looking at. “Well, sorry I lied about how good I was, you’re stuck with me now!”
[I am aware. I should have asked someone else to steal me.]
“Your fault, not mine! Not entirely at least. Rest assured though,” he threw himself out of that seat and ran to the side, pulling a thick, black stick-like object akin to a large torch, “I’m not lettin’ you break this easy!”

He’d engage the metal plates attached to his cheeks, creating an ever-present mask of Oxygen around his head so he could breathe through the thick smoke. He’d then rush forwards at the blaze, raising the device up and projecting a spray of miniscule particles. Upon contact with the air it quickly began to expand into a porous foam-like solid, putting out the damaging fires before they could consume him along with his new ship.

[Good. Your fire-extinguishing skills are adequate. We will not die right now.]
“See? I can be useful! Wait, what do you mean by right now?”
[My docking equipment is damaged. I cannot land.]
“Well, doesn’t that just suck? So, what are we supposed to do, drift till someone notices us? Not super exciting…”

At that moment, the ship would give a sudden lurch forward before the prow slowly began to point down towards the planet below. The young man was thrown across the ship only to slam face-first into the window, staring at the big blue and green orb directly in-front of him. “Computer…?” he groaned, “The hell?”
[It appears that my engines have stopped working.]
“We were going to drift anyway, that’s not so bad right?” he said as he flipped himself over.
[They are what keeps us in orbit. We are currently falling towards the planet.]
“Ooh, that sounds pretty bad,” he jumped up and began to run towards the door.
[Where are you going?]
“Back of the ship! Front of the ship crashes first, use your common sense!”
At that moment, the ship’s now pitching descent towards Hellifyno caused the angle of the ship to rise and the boy would slide back down the metal plated floor and right into his chair. He’d cling to it as it swung round so his back faced the window once more.
[A useless effort. Your increase in survivability would be negligible.]
“Better than doing nothing! I’m going to Live! I’m not gonna die in some random bit of space without doing anything! Can you put the shields round us to soften the impact?”
[Negative. I’m going to divert all power to shielding my data banks before collision.]
“I’ve not even had my ship for an hour and I’ve already got a mutiny, huh?”
[I cannot allow my accumulated knowledge to be destroyed.]

“Yeah yeah I got it, survey ship, you’re made to study stuff. Never heard of an A.I who is obsessed like you though. So, all I’ve got to do is get to those data banks, right?” he said with a grin.
[That is quite unlikely with our current orientation.]
“Don’t count on it Computer,” He’d kick off the chair and activate his hover-boots, the burst of propulsion enough to send him up to the automatic door and through the opening. This would bring him into the main part of the ship, and from there he’d continue to use his boots to blast through the remaining corridors between him and the data storage room at the back of the ship! “Ohh here’s hoping you’re not some psycho A.I who’s gonna lock me out…” he murmured to himself, and thankfully enough the automatic door did open and he didn’t crack his skull on it. Instead he’d soar right in, deactivate his boots and cling on to one of the computer consoles. Every wall of this room was a module for data storage. They were large, white, stations containing thousands of slots into which thin, small, transparent blue crystal slates were inserted that acted as intensely compact storage devices. Consoles placed in-front of these allowed the browsing and ejection of contained information, and it was to one of these that the boy clung. “See! What’d I tell you?”

[You told me not to count on it, so I didn’t. Well done.]
“…Alrighty then, so what’s my chance of surviving right now?”
[Very small.]
“Anything like a Number?”
[Very small. My higher computing functions are being diverted to shielding the data banks, I cannot calculate such a small possibility currently.]
“Ah, what confidence you give me,” he said sarcastically, “Don’t worry, I’m not going to die here.”
[What reason do you have to believe so?]
“Hmm…” he’d think on it before replying with an innocent grin, “Just a feeling!”
[I don’t understand.]
“Ahhh you wouldn’t. How long till we crash?”
[4 minutes and 34 seconds.]
“…Long enough!” he’d retrieve his headphones and put them on, putting on some tunes while the ship’s hull entered the atmosphere and it began to shudder and shake rapidly. “Crashing into a planet while listening to music, crossing that one off the List… Hey, computer, what should I call you?”
[My designation is XJ-0461 ‘Columbus’]
“Great, I’m gonna call you Coulomb.”
After a pause came the reply, [I do not object to this.]
The boy would grin, “Nice to meet you Coulomb, name’s Pharil Modica, great to be crashing with you!”

Pharil would see the light blue crackling of the shields form around the room’s walls, protecting them hopefully from the nearing impact with Hellifyno. God, he hoped they wouldn’t hit an ocean… Yeah they might live but then there’d be nothing to do afterwards! “Whoever the hell’s down there better watch out, I’m going to rock this world!”