The Ringed Reaver – Astartes and Assassin 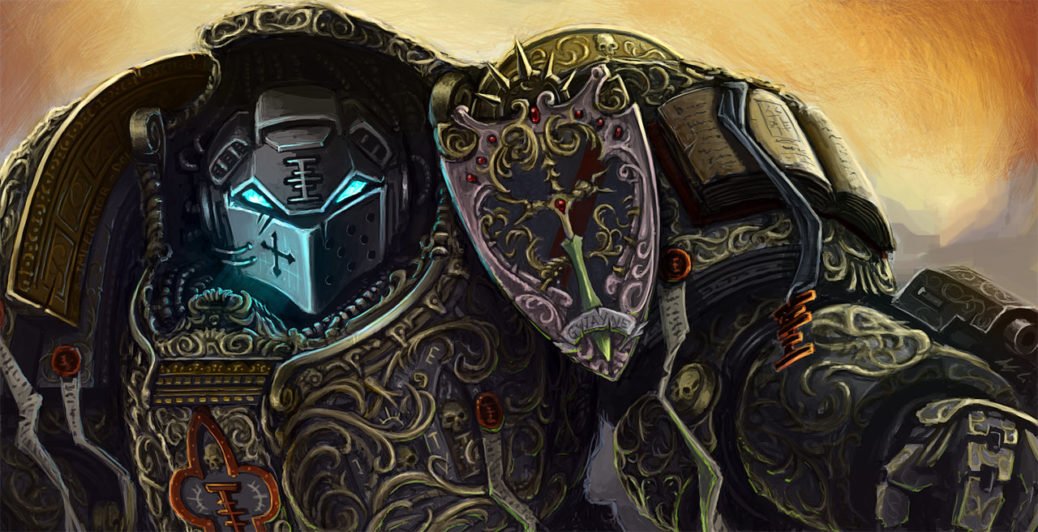 Sha’nas Raion stepped out of his starfighter onto the surface of the arid planet. The atmosphere, it seemed, was breathable, which was good. He wouldn’t need his respirator. Leaping onto the compact speeder bike he always kept in the belly of his ship, the human zoomed off across the rocky expanse, his radar beeping every so often as he neared his target. He had to be quick, quiet and brutal. Apparently, his target belonged to an order that specialized in killing daemons, so whoever it was would be no slouch when it came to combat. A sneak attack would be best.

Stopping his bike just behind a ridge, the Sith assassin peered over the top to examine the situation. In the basin on the other side, half a dozen bloodletter daemons with flaming swords were circling around a hulking silver-armored figure twirling a power halberd. With a yell amplified by a speaker in his helmet, the Grey Knight stepped forward and swung his weapon around, slamming it into one of the daemon’s swords with such force that its arm bent, and its own blade cut into its neck. Two bloodletters sprang at the Space Marine from behind, jaws wide and sword swinging, only to be forced back by a hail of gunfire from the warrior’s wrist.

The halberd came sweeping around again, slicing the nearest daemon clean in half. Another vaulted over it and came lunging forward, while another twisted into the Warp and appeared just behind the marine. Snapping his arm back, he sent the spike on his halberd ramming through the latter’s head. The other managed to score a slash down his chest before having its head blown apart by two quick shots from his wrist-mounter storm bolter.

Now only two bloodletters remained. They struck viciously and dodged agilely, but it was obvious that the Grey Knight had the upper hand. Now, the assassin thought, unclipping his twin lightsaber shotos from his belt, might be his only chance to get a drop on the fearsome Space Marine. Leaping over the ridge, Sha’nas sprinted down towards the fray, using the Force to speed his progress. Even as he did, the armored man had swept the head off one of the daemon’s shoulders and was putting heavy pressure on the last. As he drove his halberd into the final bloodletter’s chest, Sha’nas leaped, drew one of his shotos, and shoved it straight through the back of the marine’s armor, right where his heart should be. “Nailed it,” the assassin muttered to himself, just before he was thrown off the Space Marine’s shoulders.

Rolling backwards, the stunned Sith lifted his head. The Grey Knight was hunched over, one hand pressed to chest where his heart should have been punctured. That helm turned to face Sha’nas, those grim blue eye-slits glowing menacingly.

“You’ll pay for that, assassin, with your life.”

The Grey Knight came on like a storm, the wound in his chest barely seeming to slow him. It was Sha’nas’s first time facing a power weapon, and he quickly found that, while it moved a bit slower than a lightsaber, the weight of the weapon and the strength of the arm behind it simply broke through his defenses whenever he tried to parry using his shotos. Defense was useless, so evasion became key. The Sith found himself leaping and rolling about frantically, trying to stay out of the way of that scything halberd.

Putting his fear and adrenaline to use, Sha’nas extended his hand and sent Force lightning arcing towards his foe. This, at least, would slow him down.

His jaw dropped in disbelief when identical arcs leapt from the Marine’s free hand, meeting his own lightning and forcing him to focus entirely on this battle of wills. The lightning coming from the Space Marine was not Force lightning, but something far more sinister…

“Know the sting of the Warp, pawn of Chaos!”

Wait. Chaos? That thought was cut off as his momentary confusion allowed the Grey Knight’s force to overwhelm him. Sha’nas was sent flying through the air, tumbling roughly to a stop halfway up the basin. Struggling to maintain consciousness, face-down in the earth, he wouldn’t see the furry head poke over the ridge behind him.

Trotting down past the prone Sith, Helveraccoon stopped at the feet of the Grey Knight. The huge man seemed to be trying to catch his breath, and there was a smoking hole in his chest. Spotting the little raccoon looking up at him with eyes like saucers, the Space Marine knelt and tapped it on the head. “It’s not safe here, little one,” he muttered, breath catching in his throat. “You must go, before –”

He got no further before Sha’nas came soaring through the air like a bird of prey. Slamming both feet into the Marine’s shoulders, he drove his shoto into the space between the helmet and pauldron, where the armor was thinnest. Again, this should have hit the Knight’s heart, but Sha’nas was taking no chances. From there, he wrenched backwards, splitting the Space Marine’s chest open inside his armor before backflipping away. Badly hurt by the Warp lightning, the flip didn’t come out quite right, and Sha’nas stumbled and fell on the landing. In spite of the pain, he grinned – he had won, and soon he would have what he came for.

Facing away as he was, he didn’t see the dying Marine press an ornate container into the raccoon’s paws. Holding his index finger upright to his visor, the Grey Knight nodded before slumping over, barely managing to hold himself up on his halberd. His other heart was still functioning, but the wound in his chest was too much – he couldn’t quite breathe. As his vision blurred, he noted the raccoon scurrying back up the ridge, container between its teeth. Good. At least this most important charge wouldn’t fall into the hands of the Emperor.

That was his last thought before Sha’nas tore off his helmet and stabbed.

Helveraccoon raced across the arid ground, skirting the most difficult terrain and jumping over small rocks in his path as he made a beeline for his tri-fighter. He didn’t know what was going on, but someone had died giving him this, and to him, that meant he should probably keep it away from whoever had just killed that someone. Not quite what he had in mind when he’d arrived on this planet, but oh well. Adventure took many forms, and mysterious items from dying heroes was a classic starting point, he supposed.

As he ran, something in his subconscious begged him to just leave the container behind and flee without it, to not get involved in this strange, murderous affair and be content with wandering space. A pity he was so determined to have his little adventure; he ignored the warning and continued on, eyes bright with excitement.

Letting out a sigh of relief, Sha’nas reached down and, with all his strength, rolled the dead Space Marine so that he was face-up. The hole in his face was nasty to look at, but Sha’nas had seen worse during his training as an assassin. Not much could faze him anymore… though the Knight’s use of lightning had thrown him way off. Not to mention his having survived a direct hit to the heart and been able to fight afterwards. What a tough bastard… fortunately, the assassin had taken advantage of whatever had distracted his target and ended things. Ended things. Right, there was still that to take care of – the reason he had come at all.

Kneeling down, Sha’nas searched the Space Marine from head to toe, looking for the small canister he had been sent to collect. Finally, this might convince his master that he was capable and worthy of being named Darth. He had defeated a Grey Knight, after all – one of the most fearsome of the already formidable Space Marines. Just as soon as he found… that… canister.

When he didn’t find it, he searched again, growing a bit worried. He had been assured it was here. His ship and bike’s radars had been specifically attuned to the substance within the canister. It had led him to the Grey Knight, and to that most precious cargo he was carrying. It couldn’t have gone wrong.

A tri-fighter soared overhead. The Sith assassin’s eyes flew wide, and he smacked himself in the forehead. Had that small furry animal stolen his charge? Impossible… or just highly improbable. Either way, no one was supposed to have seen the assassination. Dashing back up the ridge, Sha’nas jumped onto his bike and looked down at the radar.

It beeped faintly, showing a rapidly distancing signal, pointing exactly in the direction the tri-fighter had flown.

Sha’nas snarled. He was certain now: that creature had been capable of intelligent thought, had come here to assist the Grey Knight and was now escaping with the thing that would make him a Sith Lord. Swerving his bike around, the assassin began speeding back to his own ship. It was a fast craft, one that could easily outfly a simple tri-fighter. Within a day or two, Sha’nas would have him in his clutches. The thought made him grin; soon, the foolish creature who had dared to stand in the way of the Sith would feel the vengeance of the Dark Side.