Home The Samtíðarsögur of SIGRÍÐR part VI- A wasted life 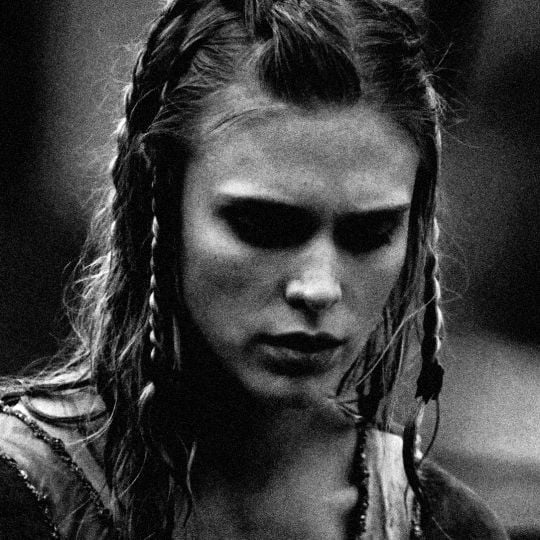 It had been weeks since her arrival into this strange world. In that time, it had shown her wonders and terrifying nightmares. She mused that it must be Aelfheim. The creatures called it Hellifyno. The maid understood little of its workings, but one thing was clear- they did produce the most wonderful ale. And THIS she held in the highest esteem. And so, she was drawn, as iron to a magnet to the tavern that was the nucleus of this fair city.

There were other reasons.

Harry had shown her great kindness and for this she was grateful. It was with a warm and welcoming smile that he greeted her as she enters the establishment, ceasing his activities to pour her an ale. The pewter tankard was already on the counter waiting for her when she reached it. The maid was nothing more than a girl. Life is harsh and one had to become fierce to oppose it and she had. But the smile she gave in return, transforms her with fresh faced honesty  into a girl once more. She could have been any farmer’s daughter, but for the shield carried on her back and the wicked looking axe that hangs at her hip.

“Ágeatavel, þakka!” the girl responds enthusiastically, weaving the words of her homeland, and raising the tankard to her lips.

When she drinks, she drinks with the gusto of a fully grown man, even to the swipe from her sleeve across wet lips as she comes up for air.

The shield rattles to the floor and is leaned against the counter but the shield maiden prefers to stand. Her appearance is uninspiring, her garb quite boyish, cast of leather and wool, with trews and long boots.

Certainly compared to some of the fair creatures that walked these lands, she was a dull looking sparrow that pecks around the feet of magnificent preening peacocks. It was only in the presence of one such peacock that she questions the validity of her own existence. Some of the women here were really quite beautiful, graceful, alluring.

SIGRÍÐR was about as alluring as a slop bucket, and if not for the intricately braided mane that hangs a pale tesseract, the color of the sun between her shoulders and the gentle swell beneath her jerkin, she would have been mistaken for a short, slight and rather insignificant man. Conversation from a table behind her draws her interest and she turns with tankard in hand. Catching the gaze of one of the speakers, she raises it slightly in acknowledgement- a smile and a nod.

Their conversation was their own concern, and she was of a land where people minded their own business. She turns once more to Harry. She had acknowledged their presence and so social etiquette has been satisfied.

“How is business, friend?” she asks the hard working Harry.

“Good Good” he responds, taking up a rag and wiping the counter in great sweeps as he speaks with her. “Times are a-changing once more” he reports with a smile.

“Ohhh?” she asks before quaffing upon the ale. She is interested but trying really hard not to appear so. Again, that need to stay out of other’s affairs. It is not hard for trouble to find to find you, but she would prefer it to be trouble of her own making and not that of a stranger.

Instead, her ears become keen and listen intently to Harry. Most often the man was silent, for he was of a mind that the air did not need to be constantly filled with mindless prattle. In that regard, both he and SIGRÍÐR were cast from the same mold. When he speaks, it is because he has something worth saying.

“Of course” he exclaims “You arrived just after the war- so you do not know”. A faint smile from the maid.

“A shame- I could have earned some coin” She leans casually upon the bar.

“Oh no- this was brutal beyond all. Even the dead refused to lay silent!” An eyebrow is quirked in interest at this detail, and in that moment,  it was confirmed that this place was Helheim. Her lips purse a little.

This means only one thing.

The raid to the land of the Saecsen had indeed taken her life, and so she was doomed to spend eternity in this place. A sinking feeling in her guts and she turns away from Harry for a moment, blinking away the disappointment and the loss.

As suspected, her flesh remained unscarred and the Allfather had passed her over because of it. She would not join her brethren in the great drinking halle of the Gods.

“Are you alright?” the bar tender asks as he observes a change in her demeanor.

A long drawn out sigh is his only reply.

Her life had been lived with the fervent belief that she would eventually prove herself worthy enough to join the long line of matrons that had held this axe. Her grandmother, her mother before that and all who had bloodied the field of battle and made the name she held honorable.

It was as though her world was ending, and the very purpose of her life becomes garbage, crushed beneath the boots of those better than she.

A physical reaction as the tavern seemed to spin about her and she reached for the counter to provide the support that was needed, before her legs folded beneath her. Pale eyes brim with the pain of loss and one solitary tear casts its journey down her cheek to hang for an eternity upon tensed jaw. It falls. And in the time that it takes for it to splash upon the boards at her feet, an aspect of the shield maiden is destroyed, the color drains from her world leaving naught but a bitter rancour.

Helheim never before seen anything so forlorn.