Home The Source of It All: God-Tier Navigation System

The Source of It All: God-Tier Navigation System 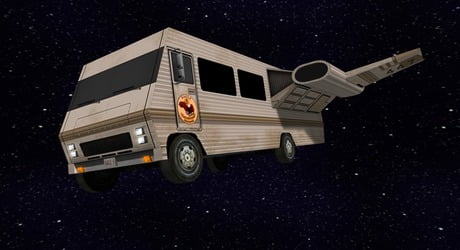 “So, like, do you even know where we’re going?”

“Evidently not. He’s given me the wheel and exactly no coordinates.” The Raven Child, having shrunk down to a six-foot tall young man instead of a twelve-foot tall transhuman, leaned out from the driver’s seat and glanced back into the RV, where Helvegen was brooding and The Other appeared to be playing some third-rate mobile game on a stolen phone, featuring paywalls, typos galore and spectacularly animated breasts. “Hey, Taelius, you finally gonna cough up some directions or what?”

The Other looked up from his ‘indulgence’ to give the Ravener the Evil Eye. “Thought I told you not to call me that. It was an alias.”

“Better than ‘The Other’. That sounds so awkward. How do we call you? ‘HeY, oThEr’-”

“Can it, dude. This titty-clicker demands my undivided attention.”

“You’re only playing it to troll us.”

“So you’re a dickhead.” When no response came, the Raven Child turned his gaze to Helvegen, totally unconcerned with keeping his eyes on the void ahead. “What’s eating you?”

“Not maids, unfortunately. I’m doing that broody thing I do.”

“I can see that. According to my inherited memories, you do that a lot.”

“Pfft.” Helvegen averted his eyes, his scowl deepening. “You gonna tell me I don’t have reason to?”

That made The Other chuckle and pipe up. “If you mean the fact that your love life has put you through enough shit to make anyone else commit suicide, on top of your failure at just about everything you’ve ever tried… then yeah. Sure. You can be broody if you want.” Helvegen’s eye twitched, but otherwise he didn’t react. Instead, he fixed those stormy blues on the Raven Child, who met the god’s stare with his own purple ones.

“So who are you supposed to be? There’s three of us now. People are gonna start having trouble keeping track, as if it wasn’t bad enough when this raccoon was wearing my face.”

The knight, now dressed in a black polo and matching khakis, blinked at the question. “Oh, uh. I’m Will.”

“And? Who the fuck is ‘Will’?” Helvegen demanded, feeling his temper beginning to rise. Here they were, on this ridiculous alleged ship in the middle of empty space, driving nowhere, looking for an object of indefinite function. And The Other was looking smug, which was never a good sign.

“I was The Other’s dream. Now I’m real.” Will’s refusal to elaborate only infuriated the tutelary more.

“And? Why are you real now? What sort of shit can you do?”

“Oh.” The purple-eyed young man thought for a second. “Well… I’m as strong, fast and durable as I need to be, and my mind is just about immutable from outside sources. That’s it, I guess. And I can project this, like… calming aura thing.”

Helvegen’s eyes narrowed. “That used to be something I did. Back before my apotheosis.” He shot a questioning glance at The Other, who snickered at a particularly egregious error in the game’s dialogue and said nothing. With a resigned sigh, he dipped his head and sat back. “Well… weird to meet you, Will. Looks like I’ll just have to figure you out as we go. I expect you know all about who I am.”

“I have your memories.” Helvegen’s felt revulsion churn in his stomach. How many more transgressions had The Other committed without him knowing? “That’s it. I’ve heard about your dream magic, and I don’t think I can do that. Or any kind of magic – at least not consciously.” Oh. So the superhuman had limitations, presumably imposed on him by The Other. Helvegen glanced once more at the leather-clad boy, who appeared to have unlocked a new character and was testing her jiggle physics.

It seemed so unlikely that the edgy bishonen could be the source of such insidious machinations, but that was his game, wasn’t it? He acted stupid and over-the-top, chewing the scenery, so that people would simply ignore the smiling beast hidden in plain sight. And it worked, didn’t it? The Other’s enemies had dismissed him as a non-threat, and some people actually liked the edgy fucker. Idiots all.

“…Well, alright. Let’s put that aside for now, and find out where we’re going. I doubt that Taelius over here plans to set a straight route to the, uh-”

“The Source of It All,” The Other snapped, jolting to his feet in a movement so sudden it made Helvegen flinch. He swept around and stared at both his lookalikes imperiously. “It just so happens, my dear potato-heads, that I have been navigating our route.”

“What?!” Helvegen leapt up from his seat and came over to investigate. “Did you- oh. You did.” In a fantastically aggravating feat of engineering, The Other appeared to have directly linked the controls of his paywall-based mobile boob game to the ship’s navigation system. Which, of course, forced the user to play the game if they wanted to interface with the star maps and MPS – the Multiversal Positioning System. “I… I’m not sure what to say.”

“Then say nothing at all, Helvey boy,” The Other laughed, slapping the god on the shoulder and directing his attention to the cleavage of a red-haired kitsune. Helvegen cringed; fox girls were decidedly not his type. “I know where we’re bound to first, but we’ll have to cross a few realities over.”

“Do I even want to know?” Will, the Raven Child, abandoned the driver’s seat to come over and have a look himself. It seemed his memories had given him a similar outlook on kitsune women to Helve’s, because his mouth immediately tightened into a thin white line. Or maybe that was just general disapproval.

“You should at least take interest,” growled The Other. “There are creatures out there that eat gods like you for breakfast, Helve. Tell me, have either of you ever fought a throdog r’luhhor?”

“Yes, but decidedly on the larger and more incomprehensible scale of things.”

Helvegen shook his head, while The Raven Child grimaced. “Once, when the Reavers and I went to outer space. We didn’t win; I had to escape to avoid many of them being killed.”

The Other tilted his head inquisitively. “Could you have killed it, if you were on your own?” Brief thought was given to the matter, before the knight gave a subtle but decisive nod. This seemed to satisfy the red-eyed boy. “Good. Then you’re working as intended.”

“Anyway. Our first destination is one where all the surviving and free sentient lifeforms have figured out ways to mask themselves from the throdog r’luhhor that swim through space. They live on these great big spaceships with extremely advanced cloaking technologies. I suspect some form of anti-magic barriers at work.”

“Alright. What does this mean for us?”

“Well, our objective is on one of these spaceship thingies. We don’t want to alert any r’luhhor to their presence, which means we’ll also have to mask ours.”

“And you plan on being sneaky. You.”

The Other snarled. “By which you mean?”

“OtHeR, you’re the largest ham from here to the apocalypse.”

“Which apocalypse? The ones I instigate, or- you know what, it doesn’t matter. Look, I can be just as sneaky as either of you. Sneakier, even. I can stop existing at a thought. Beat that.”

Helvegen crossed his arms and smirked. “I can will myself into dreams.”

“Pfft, elementary. And what happens to your body, Smugface McSnake?”

The grey-cloaked boy’s smirk grew. “It goes too.”

“Oh.” The Other looked almost impressed, before assuming an expression of utter indifference. “Well, I’ll keep that in mind, I guess. What about you, Willy Bo Billy?”

Ignoring the hated nickname and the bad memories it evoked, Will unlocked the Kyrios pistol from his belt and held it up for his lookalikes to see. The alleged handgun looked massive in his grip, being intended for the Raven Child’s other, twelve-foot tall form. “I have this,” said the knight. “It kills things when I shoot them with it.”

“Fantastic. Between my nigh-omnipotence, Helve’s slumber party trick and your thing-killer, I’d say we’re adequately equipped for the upcoming stealth operation. I’ll just be awesome like I always am, Helve can bore them to sleep, and you can-”

“Well excuse me for trying to include you. Fuckin’ five-inches-taller-than-the-rest-of-us lookin’ ass punk. Get back in the driver’s seat, we’re crossing in five.”

“Ah,” said Helvegen, right before the universe turned neon pink and began smelling of fresh basil on toast, with an undercut of decomposing carcass. “Joy.”