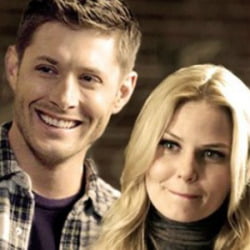 Ever since his mother was killed by a demon, he had known the truth: that one should always be afraid of the dark. Supernatural creatures were out there, and most of them were unfriendly, or at least all the ones that he had experience with. He had made it his business to hunt down these threats and rid the world of them. He wanted to make sure that no little boy went through what he and the rest of his family had to go through when the poltergeist took his mother away from them. Sworn to protect humanity, he made that his entire life, driving around the country to hunt down supernatural threats to protect mankind.

And then…he found the motherload. It was a small town in Maine called Storybrooke. To the world it looked like a meek little town that always slept. It looked like the small town that every suburban dream looked like. But rather than just a city by the docks full of lobster and maple syrup it was the motherload of supernatural activity: witches, werewolves, goblins, dwarves, even gods. It was every kind of hunt he had ever done, but he wasn’t stupid. He couldn’t just go into town and start shooting up every immortal that lived there. He decided to see if they were truly a threat or not. And if that wasn’t enough, the previous sheriff had died a very mysterious death which he definitely wanted to investigate.

No one else should have been able to see the town line once he had driven up there, but Dean saw things that no one else could. He could see the town line and the town itself in the distance very quickly, even though a curse shrouded the rest of it from the eyes of other strangers. Dean drove into the center of town, and so far everything looked normal, but something told him that things were far from normal here. Who that he saw on the street could be a threat? Was it that girl dressed in red? Was it that old woman talking to her, was it the mayor? Or were all of them disguised as humans?

He had spoken to a little girl(she was a teenager but was tiny as hell and dressed as if she was still two years old) on the street who pointed him to the direction of the diner. The hunter walked into the diner and sat at the counter, casting nervous looks at all the people around him as he ordered a piece of pie from Granny. Maybe he should have gotten a normal dinner but…there was pie. But as he devoured it he had a feeling that there was someone here that he hadn’t seen in a long time.