Home The Temple in the Holotape

The Temple in the Holotape 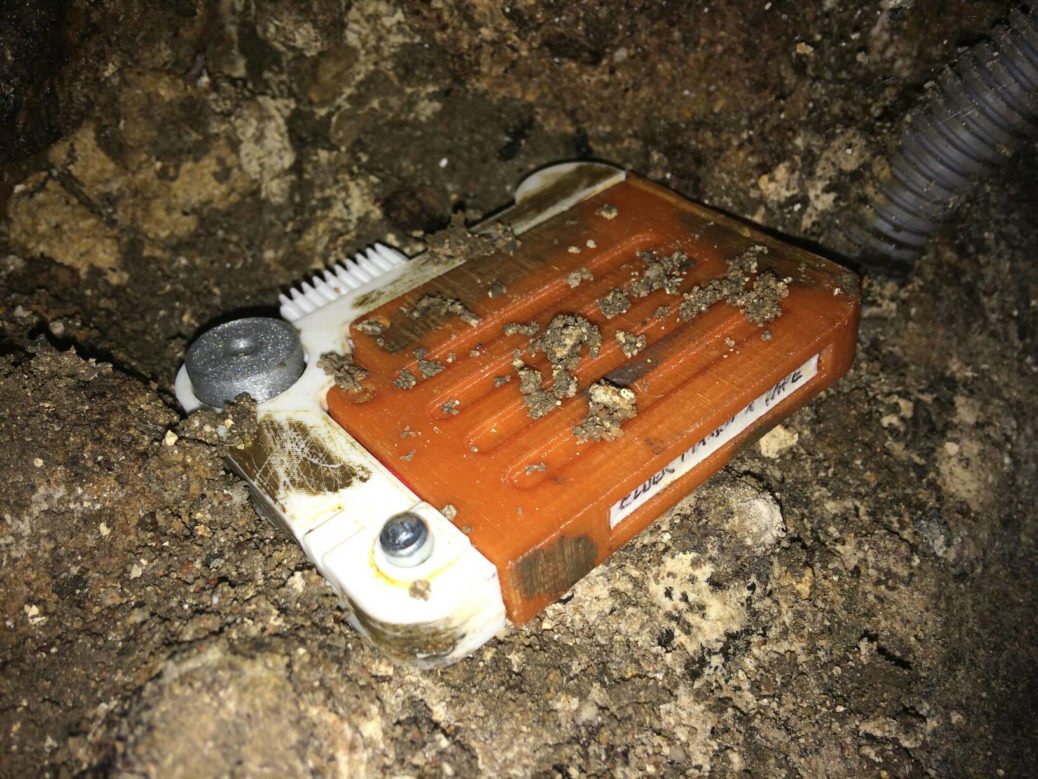 The sun was setting, Axel and Erin had been wandering around the ruins of old world New York. They skipped along the rubble covered asphalt and played games as kids would. chucking rocks and jumping on top of fallen lamp posts that laid waste in the streets. Although both 18 years of age, Axel and Erin were instructed not to go exploring the flooded metro systems… It was dark, cold and filled with danger. One could easily get lost within the seemingly never ending tunnels that ran under the streets of their world. However, the tech kiddo Erin had just gotten her hands on a working Pipboy 2000, with a working flashlight and a couple added mods that she added herself. Secretly, she had gotten a holotape with the maps of the rail systems below and she was now looking to persuade Axel into going through with her plan. It was all in good fun, for Erin loved exploring new territory with her best friend Axel.  Erin slowly began to lead them to the Subway station on 23rd street. Once they got close enough to the gate, Erin was ready to pop the question. It was not a moment too soon either, for Axel was starting to get cold feet.

Erin: “So, are you ready to be hardcore Maidens?!” She flexed her arm muscles, which were not worth mentioning since the kid spends most of her time on the terminals, clacking away at their keys. Axel was a bit nervous to answer for she herself didn’t honestly know why they were in the No-Go Zone in the first place. Axel: “Uhh… Whaddya mean, Erin? You don’t want to go… down there do you? Flare said..” Erin was quick to interrupt her with an outburst Erin: “Flare doesn’t have to know! It’s just between us! I promise we won’t go that far in! C’mon! It’ll be fun! I got your back, and you bloody well have mine!” The little Aussie girl was quite brave but that just made her words that much more comforting. Axel thought long and hard for a moment. She did have her laser pistol on her hip and plenty of microfusion cells to keep the weapon fed. She bit her lip and nods. Axel: “O-Okay… But just a little bit! Not too far, okay?” Axel put her trust in Erin, and Erin knew she had to keep her friend’s trust. Erin: “Deal! Now let’s get a move on!” Erin slaps the side of the Pipboy that was secured to her wrist and with that the bright green light illuminated their path before them. Erin was quick to transcend down the broken escalators and past the iron barred gate, which lead them to the dark, cold entrance of the tunnels.

Upon entering they took a staircase even further down. Narrow, wet and littered with trash.. the walk down was a slow and cautious one.. but eventually they did enter the ticketing and waiting area. A green glow came from the ticket booth and quickly grabbed Erin’s attention. Ah! It was a working terminal that kept track of the train schedules and ticket information. She curiously browsed through the old data but quickly got bored. Axel poked around in the trashcans and old business briefcases that littered the ground next to the charred skeletal remains of those from before the bombs fell. Axel sighs and plopped her  butt down on a bench while Erin did her thing… Axel placed her hand on the arm rest and found her elbow resting on something uncomfortably. She took a look after raising her arm, and to her surprise.. it was an old holotape. As she went to go and reach for it, her clumsy finger tips pushed the tape over the edge and onto the floor.. where it fell in mud and other muck that collected.

Erin looked past the terminal curiously to see Axel on all fours reaching for something under a bench. An odd sight indeed that required an explanation. Erin cleared her throat and giggled as she spoke. “Axe… What are you doing?” Axel struggled and grunted, before crawling all the way under the bench and nabbing the holotape. “I think I found a game!” Erin was now ever more curious. Axel climbed out and back on her two feet. Her chest and belly were soaked with muck and water… but the treasure was theirs! Axel gives it a look over but Erin was more knowledgeable in that field than she was, so she tossed it over to Erin. Erin catches the Holotape and flips it about. The label was ruined and only way to find out what was on it was to stick it in the terminal. Erin was quick to do so and quickly called Axel over to give it a look with her. “C’mon Axe! Let’s see what’s inside this treasure you found!”

Erin was quick to throw it in the machine and begin to boot up the mysterious holotape, and quickly a bunch of symbols and text made a very detailed welcome screen. The Welcome font was to something called “God’s Third Temple”. Both Erin and Axel looked at the screen curiously. And a prompt came up on the screen, making the friendly Welcome screen and text scroll upwards and be replaced with new text that stated a few different odd pieces of information. The girls read through the text on their own. Both were silent and intrigued by what was on this random Holotape. The tape was made by a High Priest named Saint Davis. The tape was known as a temple and it was God’s temple of all. It demanded offerings and prayer… but the most interesting part of all is that the tape claimed to be a way to contact God himself. The girls knew nothing of religion for they were just part of a Mercenary outfit and only focused on survival and money. To them this was all Greek… Catholic Greek. The girls explored some of the contents of the tape but overall Axel slowly began to lose interest… as for Erin, she grew more and more interested. Erin wanted to talk to God. This God seemed… highly praised by this high priest who left behind his life’s work.

Axel grew tired after three hours of Erin going through line after line of code and oddly shaped characters meant to represent objects or animals. Axel slowly began to nod off as she’d returned to the bench she once sat upon… Erin was hunched over terminal clacking away at the thick keys. Erin would grumble after messing up and having to erase all her typed characters to progress further into this hard puzzle of a tape. Erin snapped and slammed her hand down on the keyboard and a new line of text came up… almost as if it was speaking in tongues.

This frustrated Erin even further until all the text wiped away… and there was a black screen before her. The terminal began to make sounds as if from a game like Pip Fall or The Red Menace… but instead large blocks of code began to appear on screen.

This God was finally speaking to Erin.

Erin was giving up hope.. but then she began to see codes making out a picture of a cartoon drawing of an elephant. This to Erin was a bit of an odd way to make contact but she believed it was SOMETHING. She began to type out a message while also thinking of what to talk to it about. GOD WILL SPEAK IF YOU CAN HOLD UP YOUR END OF THE CONVERSATION- SAINT DAVIS. The text above explained. This made Erin a bit antsy and nervous but.. she tried her best at what the tape demanded of her. She felt as if the High Priest himself was commanding her and instructing her on how to approach his God, and would not let her surpass him until she was ready. The tape was indeed mind boggling and very hard to follow. Suddenly, Erin began trying to communicate with this God. And the God responded. Not in ways she could understand but with more tongues and seemingly randomly generated text. Axel slowly began to wake up from her nap, finding that she had dozed off waiting for Erin. She looked around some before realizing that time had flown by… and they were not going to be able to travel back home in the dark…. The best thing was to stay put and wait for morning. Axel blamed herself silently but was also very worried about Erin.

Axel looked over at the busy Code Monkey. “Erin…” She spoke a bit concerned “Erin it’s late…. Why are you still playing that game?” Erin was silent for a moment before finally speaking. “Axel, do you believe in God?” Axel tilted her head not knowing what Erin was going on about. “Erin… We were supposed to be home.. We’re going to get in trouble!” Erin seemed to be sucked into the code and wasn’t exactly responding to Axel’s concerns. Erin smiled softly “Axel, relax… God’s got a plan… Just gotta offer some more of these “Moses Comics” and a couple more Hymns and we should be good to GO!” She smashed a couple of keys before the terminal shut off. losing all auxiliary power. Erin screams and shook the damn thing, before looking over to see that Axel cut the cable. “Enough Erin! You said we’d be in here for only a little bit! It’s been a lot a bit!” Erin quickly pops the Holotape out of the terminal and pockets it. “Alright, alright…. sorry Axel… Just got caught up in the codes and mystery I guess…? I’m sorry. You’re right. I messed up… We’ll make a break for home at dawn…” Axel nodded her head and from there they laid on the dry parts of the bench and the counter top next to the warm terminal. They got  few hours of shut eye before waking up at the break of dawn. They awoke to the sound of a radio broadcast coming from Erin’s Pipboy… as some sort of alarm.

Axel and Erin headed out to the surface. Although Erin tried not to think about it… she did feel some sort of presence still with her. Watching over her or tickling her nerves a bit. Axel was quiet and just wanted to get home… Erin wanted to get home too. To see what else she could get from the holotape… but it was her journey through the temple alone… A journey she could not share. After all, Saint Davis said so.