Home The temples of shattered dreamscapes: Whispers of poison and ice. SUMMARY!

The temples of shattered dreamscapes: Whispers of poison and ice. SUMMARY! 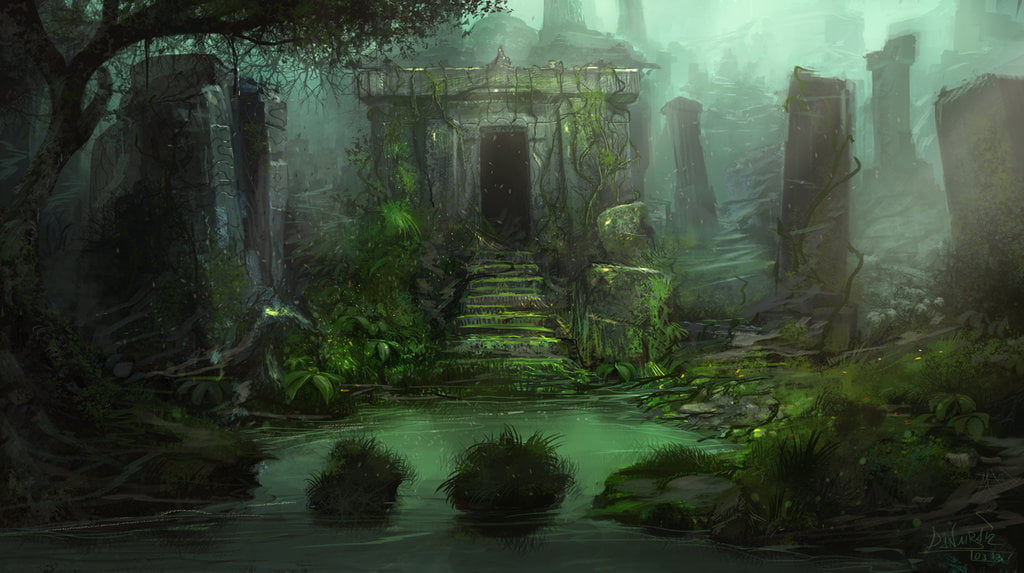 The temples of shattered dreamscapes: Whispers of poison and ice. LOG

The temples of shattered dreamscapes: Whispers of poison and ice. Summary.

Within the southern continent in a location, not quite known exactly, Austin Burgundy was waiting for adventurers to respond to his call and offer of five hundred coins, so that protections could be offered, whilst the man explores the newly discovered ruins, that hold a malevolent presence within.

It was not long, before the man met Lily Ann Black, Randall Wayne and Zheshu. The newly met team seemed quite promising at first. Names were exchanged between the two men, and a torch was prepared. Without hesitation the party of four ventured inside the dark and gloomy underground stair way. However after brief discussions, and letting guard slightly down, Lily Ann Black stepped on a pressure plate, triggering a mechanism that made stairs behind them rise one by one, threatening to crush them.

Through an eye of a needle they managed to escape, but the door way shut close behind them, leaving them with only three options. It was then apparent, that the location wasn’t of natural kind. The stone was aged, yet carving were nonsensical, and almost fanatic, as if to mock the history of Hellifyno. Lily Ann Black managed to summon a tarnished mouse from within the dungeons, thanks to field rations they had brought, in a shape of delicious brownies.

The mouse showed the possibly most best way, but squeaked with distressed tone just by the steps. Not seeing creatures warning Randell Wayne stepped on another plate, hidden in the three steps leading downwards, springing the trap, and awakening four stone abominations, Gargoyles with human and harpy features.

The battle was intense, but with teamwork and great effort the party managed to defeat the stone creatures, learning that a dark substance was dripping from the creatures. Austin Burgundy was protected, nevertheless, and the party was well and fine. At this point Randell Wayne had decided to summon a powerful being, with which he working with. As the battle had ended, and time was given within the halls Ruby BloodFang was summoned, however, the whole ordeal extinguished the torch. And as Lily Ann Black was heading down the stairs, she fell down a lower level. Zheshu managed to consume the dark liquid.

Soon enough party followed. Hidden within the raked, soft soil were bodies, that seemed to have been decomposing for centuries now, mummified and preserved. Among them, a fresh adventurer had fallen. It was none other hat Elesis Sieghart. The rant and exploration of the adventurer did awaken the queen, and soon enough other corpses awoke as well, as with a shaking sensation the route back collapsed for them.

The newly awoken beings screamed the name of the mother, as Austin Burgundy finally snapped, almost as if the man was possessed. Trying to protect themselves and the VIP, the heroes reacted by fighting against the undead, but to no avail. They were protected by ancient charms. What was even more strange, was that they sought not to fight, but to seek motherly comfort in heroes. This did damage Ruby, due to her history and Elesis, due to her war trauma.

What was observed in the mean time, was three pedestals within the room, corresponding to three locked doors. On each of which was a bow, sword and an orb. Randell took a bow, Lily – the sword. Almost without hesitation Lily equipped the sword, as she slashed and managed to exterminate a large portion of the ghouls. Randal still used his axe, unknowing that it would do no damage. Screams went on, as Austin named them murderers and child slayers. At this point ZheShu had been dormant, unable to act. Was it the vile liquid, no one knew.

Soon enough Lily managed to defeat ten of the ghouls, whilst blood filled rage began to fill her. Madness must have given her visions, as she murdered “Her children” in cold blood, all the while, the blade’s handle was digging in her palm, touching the bone itself. Elesis saw that, and couldn’t take the suffering of her loved one, begging her to stop. Ruby was backed in a corner, as being rendered powerless, she finally was forced to face her weakness and past, making her fragile, despite all that she had done. Randell finally caught up with the idea, and equipped the bow, smashing ghoul with one swoop swing, before throwing the bow at the ghoul pestering Ruby.

However, his flesh ripped off his palm, making the trajectory unfavorable. The ghoul caressed Ruby’s face. Soon enough with flesh attached and blood dripping, Lily dropped the sword, and decided to embrace the ghoul. After a brief confusion of the tarnished soul of the unborn child, it was laid to rest peacefully, leaving the heroes with a bitter taste. They could have approached this situation in a better manner, but now the cursed Austin was speaking the truth: “Murderers! Child killers! Abortionists!” Soon enough the man’s head snapped, almost as if he had lost his purpose. Austin was dead, and Zheshu, as it came naturally for the being, absorbed the undead, dissolving them. They needed to catch break, as one of the three doors opened, corresponding a red light. The weapons that were given rotted and dissolved. The scars remained.

Was it weakness, or was it trauma, that made her do so, but Ruby soon turned into a totem of fox. Sadly, the object was left behind, as the heroes were too fixated to now simple get away from this place alive and sound-minded. They found themselves before a path, that separated in two routes. It was a blessing, that Lily had a charcoal, so that they could make a note of which paths they have picked. Walking and wondering within the cursed, round-about labyrinth, they noticed the change of smell. At points it was pleasant, at points unpleasant. At this point nothing made sense to the heroes. To make things worse, they began to form body parts of invertebrates.

As they wondered the halls, Elesis had formed a tentacle arm, a bug joints on her other elbow. Lily had mandibles of praying mantis and ear of a snail, while Randell had the worst of it, having taken most steps, ending up with a follicles on his foot, fly’s eye and an arm, that resembled a lobster claw. This was the point where the Lily finally snapped, having walked in circles, and making no sense about the location. She fell apart.

Almost like a messenger, a symbol was burned before them, resembling a diamond shaped map. At first glance it made no sense, but afte further examination, Elesis managed to recognize the layout. All this time, they could have solved this situation with four steps. But the lack of knowledge and the fear induced by the smell and transformations made them spend hours within the cursed trap. With two turns, and Elesis’s mouth growing more tentacles, whilst Lily’s left bottom cheek inflated to cancerous proportions, they finally found themselves in a room, that had been partially destroyed due to the multiple quakes happening in the dungeon. From the opening a morning light was shining in, revealing three swords on the pedestal.

The whispers were dissatisfied, and urged the heroes to go back. Escape. Run. weave lies within them. Lily at this point began to stop Elesis, attack her deformed arm. At the very end of the journey, they faced the most dreadful menace. Their misery, insanity, fatigue and inner demons. Inflicting almost fatal wounds, whilst their body parts still resembled insects.

Despite the almost desperate situation, Elesis saw hope within the three blades before them, as the whispers echoed with warning. Hesitating, she took the crimson blade, which formed a scarlet wave, vanquishing their deformations and banishing the whispers. The wounds, however remained. The players had to evacuate, as it was now possible. Still they were delirious, and unable to place their pieces together.

The swords were called sisters. Sister of ember, sister of ice and sister of venom. Each had an unique variant. The crimson blade was able to catch everything on fire, it touched. The pale blade was able to freeze any surface it clashed with, and the venom blade numbed any body part, that it scratched. But as Elesis equipped the sword, the truly unique feature was seen of the three sisters. A copy of the blade appeared in Queen’s hand. As more to that, every time she would drop the copy, a new one would form in her arms, as long as the original was held. This was true to all three sisters.

Weakly, and misshapen, taken form of a dragon, Lily weakly equipped herself with venom blade, whist Randell was left with the sister of ice. Zheshu did snap out from the dormant state, and was quick to find it’s way out, having given the gift to turn in stone gargoyle it had consumed. Will the adventurers use these purified relics, or sell them off, was up to them. But one thing was clear. Their minds were twisted by none other than Nakhtrendsensesenaidairiaphos Furf’fonnyalwaldalsonsonmesis trough deceit and promise, bringing them to new inner battles to fight with. Were the swords a reward enough to pay back the trauma? Who knew? Will the mastermind behind the ruins act again? Such was the promise. But one thing was certain, for today they were safe, and the quest was completed. The local population was rescued from the nightmares, hellish occurrences and murderous intents.

The beginning was very promising and gave the idea of how well and event can be made this way, however, coming towards the labyrinth, it was apparent, that the structure was made too difficult and tedious. Not to self, in roleplay environment, do not involve too complicated puzzles, as they will destroy the mood, lessen the importance of the lore and all in all, wear the players out unnecessarily. Perhaps a sense of progress must be involved with moderate amounts.

Huge thanks for the participants! Hopefully you shall step into another dungeon, this time with more experience, and reason to seek out and annihilate this menace!