“A vaccine…”
“Excuse me?”
“A vaccine, to protect us…”
“P-Protect you? Are you serious!? Jesus Trish! A fuckin’ vaccine isn’t going to save you from any of that freaky shit! I don’t care what shit is in it, if a Void zombie tears out your thigh, nothing short of a gunshot’s gonna save you there…” She then realised something and carefully watched her sister’s face as she spoke again, “…This is the part where you tell me ya said ‘Good day’ and refused him… Right? Trish?”

“… It didn’t even hurt.”
“Are you FUCKIN’ serious!?” Kathryn turned around and also screamed in frustration at her too-trusting idiot of a sister but she remembered the sleeping girl upstairs and instead just yanked her hair and made some sort of quiet hiss-groan of frothing frustration. “You just let some fuckin’ Random Guy get you with a needle!? And for what!? For all we know that was Drugs and he was getting’ ya addicted or some shit so you’d buy from him! Why the Ever Loving Fuck would you agree to that!?”

Trish finally looked at her. No, not at, she looked through her. “… Because I’m scared… You think I don’t know it probably wouldn’t work? But… but what if it just might? He sounded so… Nice, Kath. I wanted to believe him, and… I do. That everything will be ok. Just to make sure that happens, I went along with it… if there’s even a slight chance it’d keep Becca safer, of course I would go with it.”

“Oh… Gods you made your own daughter have it!? Jesus… Fuckin’ Jesus I can’t believe you! You’d endanger her just because you’re scared!? You fucking Idiot Trish!”
“Do we look ill to you? We are fine!”
“Don’t care! It’s the idea that you even went along with it!” Kathryn was still restraining herself from totally yelling at her sister. She was pacing, holding her temples with her fingers as she was processing this total lack of judgement, “How much did it even cost? How much for your freakin… ‘Safety’?”

“Nothing…” Trish said slowly, once again looking outside. Now Kathryn felt a chill run up her spine, spiralling out from her heart and flushing through her nerves. This was too weird, too wrong.
“What…?”
“Nothing… he said it was free…”
“No, nobody just does that for Free Trish… I-I don’t… what the Hell…” This was seriously wrong, there was too much freaky and weird here. A random guy hopping up, telling her everything’s gonna be ok, injects them with Whatever and all for nothing? They weren’t even Sick! Her heart was pounding so hard she could hear it like a fleshy drum in her ears.
“Look, don’t worry, I’m fine. Everything’s going to be alright…”
“Don’t you fuckin’ say that Now, after all that! How’m I not supposed to worry!? My sis has apparently lost her senses and you’ve got… who knows in your system! Hospital, that’s it, I’m calling the hospital.”
“No!”

Fingers clamped around Kathryn’s wrist as she tried to go to the house’s phone, her own mobile drained as she messed about on the long journey here. She tried to yank her arm away, “We need you checked out to see you’ll be fine! I’m doin’ this cuz of you being an Idiot!” She yanked again, but nothing gave. The grip tightened on her wrist, the skin pinching and her fingers tingling as blood was cut off. “Trish… Trish let go. Let go of me…” Another yank but she was moving the arm less with each go. “Trish…?” she’d look into her sister’s face.

There was no recognition there, empty eyes stared back at her, like a doll. Fear shot through her, adrenaline being released into her system out of instinct and she once again renewed her struggle to escape her sister’s grip. “Trish! L-Let me go now! I promise to not phone anyone just Let GO!” she forgot everything about not shouting and continued to struggle. The grip grew tighter and tighter, Kathryn’s struggles weakening and her shouts fading into gasps of pain until something gave and a shrill shriek rippled out from the room, muffled by the torrent of rain outside.

Tears streamed down her face as her broken wrist was tormented further by that steel grip, the pain was greater than anything she’d felt before, but it was still nothing compared to the mixed feelings of fear and betrayal aimed towards her sister and her bizarre behaviour. Self-preservation drove her to try and brace her wobbling legs so that she could hit her sister with her other fist, anything to loosen this grip. However, something impacted with the back of her head in one swift movement. Shattering ceramic from the vase set on the table clattered to the ground moments before her body crumpled on-top of them. Trish had quickly grabbed it and attacked her own sister with it, not a single hint of hesitation in the motion. The vase had been relatively thick, so the unnatural strength required to crack it on someone else’s head ensured Kathryn’s cognitive functions and vision were both heavily impaired. As the room swam around her and pain both dull and sharp pulsed through her head, wrist and abdomen her shaken brain could only grasp for the simple questions: Why? Why do all of this? What was going on? Was this not her sister?

She soon became aware of herself being dragged along the floor, the pain in her wrist worsened of course and her moans of pain mingled with the clinking of ceramic shards that gave small cuts to her clothes as she was pulled over them. “Tr…Triiish…” she slurred, hoping for some answer at least, but she got none. When they reached the front door they stopped, and a clicking sound signified the door being unlocked. However, Kathryn’s attention was taken as her eyes flickered to something coming down the stairs. A little girl in pink flowered-print pyjamas, walking at a business-like pace. Hope that she might break her mother out of this freakish stupor died when Kathryn saw the little girl’s eyes… there was nothing resembling sentience there, not anymore. It was like the little girl she used to read books to had died, and someone else was puppeteering her body.

The cold wind and rain bit into her when the door opened, slamming into the wall, and she was dragged further outside. A whimper came when she was pulled down the step and dragged through the muck and wet gravel. “St-Stop it…pl-please…” She could only beg, she didn’t have the strength to fight back in this state. Her head lolled around, still concussed from the blow dealt to her skull, and she was dimly aware of blood seeping through her hair as the rain washed it through the locks. Onto the road the strange group went, mother and daughter in utmost silence while their familial charge cried and groaned. A sharp, almost 90 degree turn to the left took them in the same direction that Kathryn had originally come from. “Wh-…where are we going…?” she sought desperately for Something to focus on as she fought the black-out that was trying to put her under. No answer, of course.

But, she soon became aware of footsteps. Hope was injected into her immediately, perhaps someone could save her from her own sister here and whatever weird thing was controlling them! She tried to look up and around, and she saw that there was people all around them… all walking in the same direction, with the same urgent pace, and the same expressionless face. There were dozens of them, and the number was ever-growing. Doors kept opening, light gushing out from family homes only to darken with shadows as the occupants promptly exited and joined the mass. Adults and children alike, all of them seemed to be underneath this horrible spell. Kathryn even saw a baby, determinedly crawling its way over the wet concrete. Where were they all going? What could their destination possibly be?

“Tr-trish…pl-please… I-I’m sorry j-just… just let me go please…I’m sorry…” She wasn’t even sure what she was apologising for, she just hoped it would allow her freedom.

“It will all be alright, more than alright… Everything is going to be better now. He said so. He said so…” 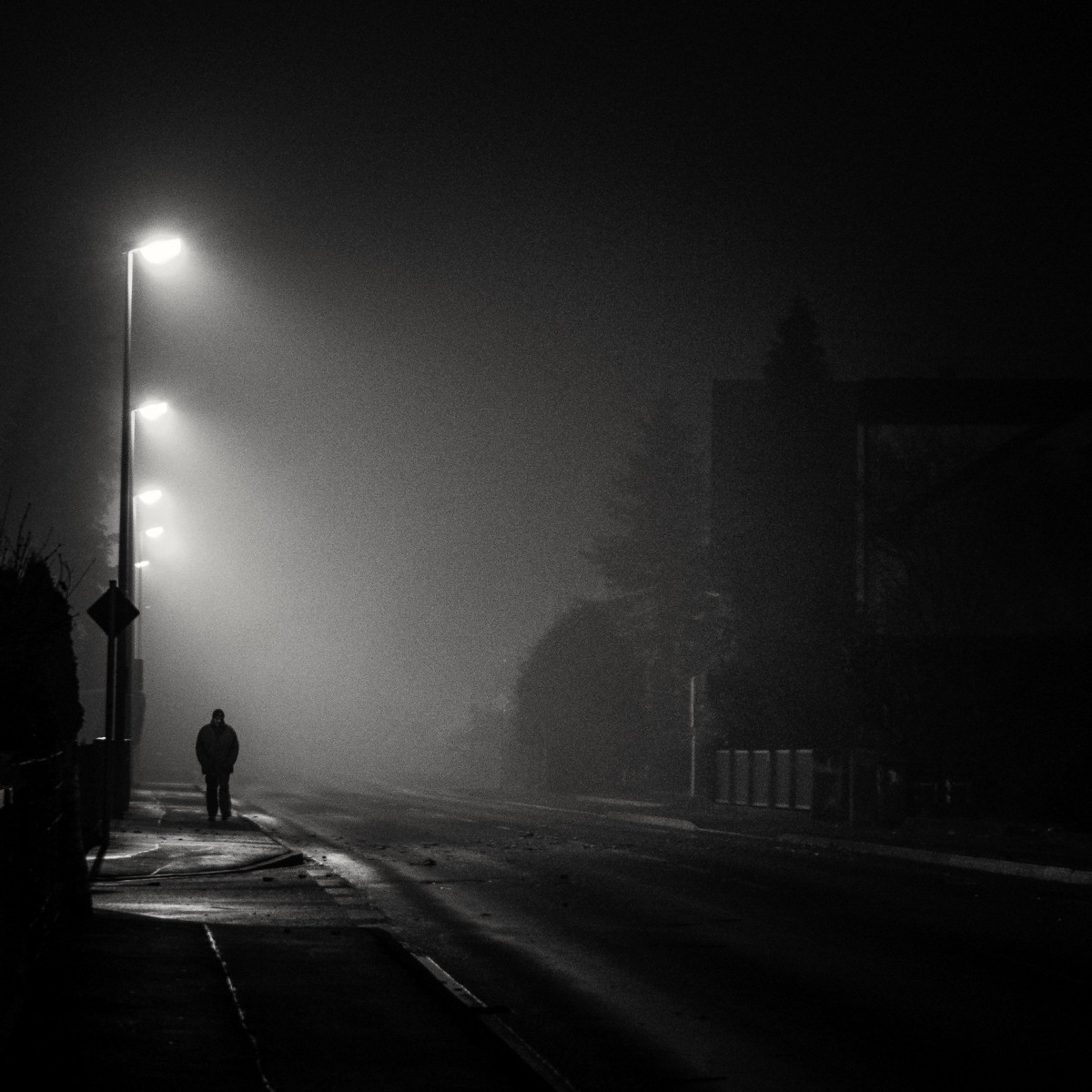