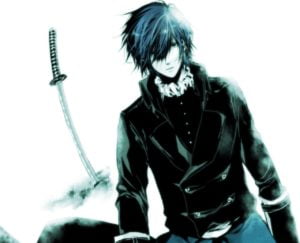 It was a cold night in Ar’Ellis, as the rain pours heavy as Abel walks in the alleyway. He notice a collapsed woman and as he examines the body he found bite marks on her neck, the woman’s skin is pale gray and has been drained dry. As he is making the cross sign he heard a small child crying, he looks around and as he heard the child crying from the fridge and see a young girl. Abel kneels down in front of her and pulls a loaf of bread out and said, “Shhhh it’s okay little one.” He hands her the bread and ask, “Do you know who that woman was?”

The child nods and said, “She was my mum, sir.”

Abel sighs and said, “I’m sorry for your lost.” He pats her head and ask, “Do you remember who did this?”

“It was a priest, sir,” she answered, “An old priest attacked her before she put me in here.”

Then Abel pulls out a coin pouch and hands her some gold, he looks at her and said, “I want you to take this gold to buy something warm to eat and after that I want you to head to an orphanage and stay there, okay?”

She nods and after she received the gold she left. Abel stands up and thought, “Looks like my first stop is the cathedral.”

He grab his whip as he knows that it is going to be one hell of a night and head to the cathedral. As he made it to the cathedral he is hiding behind the barrels and saw some priests and can smell the rotting flesh from them and said, “Ghouls…it has to be ghouls…” As he is going to pull the .357 magnum revolver he thought, “No that would be way too loud.” He release the grip and then pulls a silver stake out instead and going in silent. He examines the surrounding and decide to go on top, knowing that there might be some of the vampire’s minions, so he went back in the alley knowing that he passed by a ladder, as he is about to climb up the ladder he heard someone coming his direction, he jumps in the fridge where the victim’s daughter was hiding and listen.

“Well looks like master had his fill for the day,” said the skinny priest.

The big buff priest just grunts and picks up the body and as they are walking the skinny priest said, “Well as long as he is full and pretends to be a Grand Priest then I have nothing to complain about.”

As they left the alleyway Abel opens the fridge and said, “Well looks like I’m on the right track.” Then he starts to climb up on the ladder and continue on his mission.

As Abel made it in the cathedral from the rooftop he is walking on the rafters as he can hear the priest making his ‘holy’ message. As Abel drops from the rafters he lands on the floor and as he is slowly getting up as all eyes are on him, he grins and ask, “Don’t mind if I dropped in?”

The priest points at Abel and yell, “It’s a hunter! Attack my children and defend your master!”

A couple of guards, one using an ax and the other a sword meant to be wielded two-handed, are charging after him and as Abel jumps in the air and lands on one of them, he toss a dagger at the other one in the eye socket. Abel ripped the other guard’s helmet off and there was nothing in there and he said, “Well shit, living armor.” Abel jumps off and unsheathes his sword that was resting on his back and said, “Guess this is the right place.”

As he sees the Grand Priest exiting the chapel some summoning glyphs appeared and winged demons carrying tridents came out and as one of them screams at Abel he said, “…okay so this is not an ordinary vampire.” He swings his sword around and charges at them. As one of the living armors lift the ax up Abel toss a vial of Holy Water and as the vial shatters and as the water touch the armor it lit up in blue flames, but the one got a hold of him, slams him to the ground, and holds him down. As Abel is struggling one of the winged demons slams the trident down, but missed his head but leaves a knick on his cheek, Abel grins and said, “My turn.”

Abel turns into mist and escapes the living armor’s grasp, as the demons are confused he reappears on the armor’s back and wrap my whip around one of the flying demon’s neck and twirls it around hitting all of them, as he let the demon go it went flying and got impaled by a falling trident, Abel jumps down and as he picks up the ax he slams it down on the armor destroying the core. He stretches his neck that made it crack and said, “Now the main honcho.”

He walks up to the door he kicks it down and hard. The ghoulish guards try to rush him and he tossed silver daggers at them hitting them in the head and the chest, they fall down and perish. The grand priest falls on the ground from his chair and as he is crawling away Abel picks him up and shove a stake through the heart destroying him as he burns up into ash. He wipes his forehead and said, “Mission accomplished.”

He walks back into the chapel and start to head out for his next assignment.