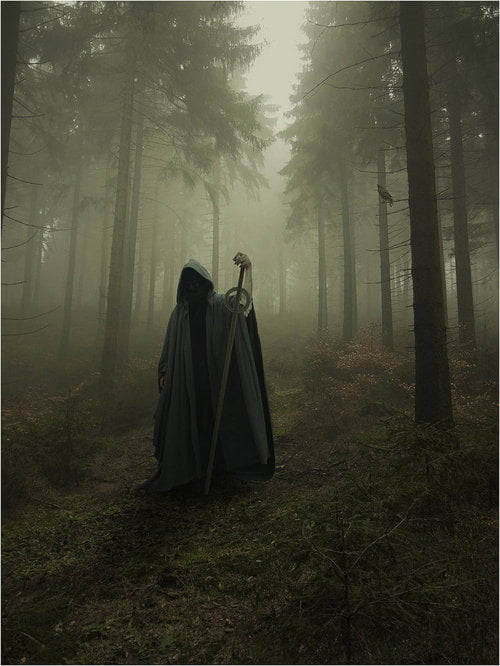 While journeying through the woods on his way to nowhere in particular (as per usual), Helvegen felt an odd feeling descend on him – not a heavy feeling, nor a warmth or a chill, nor a sickly feeling or anything if the sort. Rather, it was the indescribable feeling of somethingness – as in, the uncanny feeling of not being alone. Helvegen felt a massive, grand presence, suffused with magic, hovering just out of sight – not touching him in a conventional sense, but prepared to engulf him – to claim him. And yet, this feeling wasn’t the strangest part if this whole affair. That would be the notion that it wasn’t the first time he’d felt this.

The presence grew steadily, becoming more and more undeniable until, in a transition so smooth it took several seconds for Helvegen to realize it had occurred, the grass beneath his feet had become greener; the leaves on the trees had changed colours, their boughs twisted into different shapes; the wind had switched direction and cooled; the birds in the trees sang an unfamiliar tune. Suspecting what had happened, but not yet sure of it, Helvegen raised his right hand, index finger and thumb extended, reached out with his will and desired a snowflake to pop into existence between his fingers. When it did, Helvegen looked around in confusion.

He had been certain of it – that once again, his world and another had converged and he was treading on alien ground – but now, he wasn’t so sure. Magic as it worked where he came from usually needed a bit of tweaking to function elsewhere, yet here was his desired snowflake, melting steadily between his fingers. If it was a different world, Helvegen thought, it was a very flexible one. A smile crossed his face at the notion that maybe, for once, a world might be as happy to see him as he would be to see it.

Whether that feeling had truly signaled his arrival to a new world or had simply been his imagination, one thing Helvegen knew for certain was that something new – a place and perhaps a people completely unknown to him – lay waiting through the woods. That thought made his smile broaden. He looked around and breathed deeply, taking it all in: the soft grass, the orange leaves, the twisting branches and the strange, beautiful birdsong. New world or no, joy, substance and wonder could be found wherever one deigned to try and find it. This was the idea that remained lodged in his mind as he set off through the trees, unknowingly making his way towards the city of Consequence. Such was his guiding philosophy – the Wanderer’s Way.