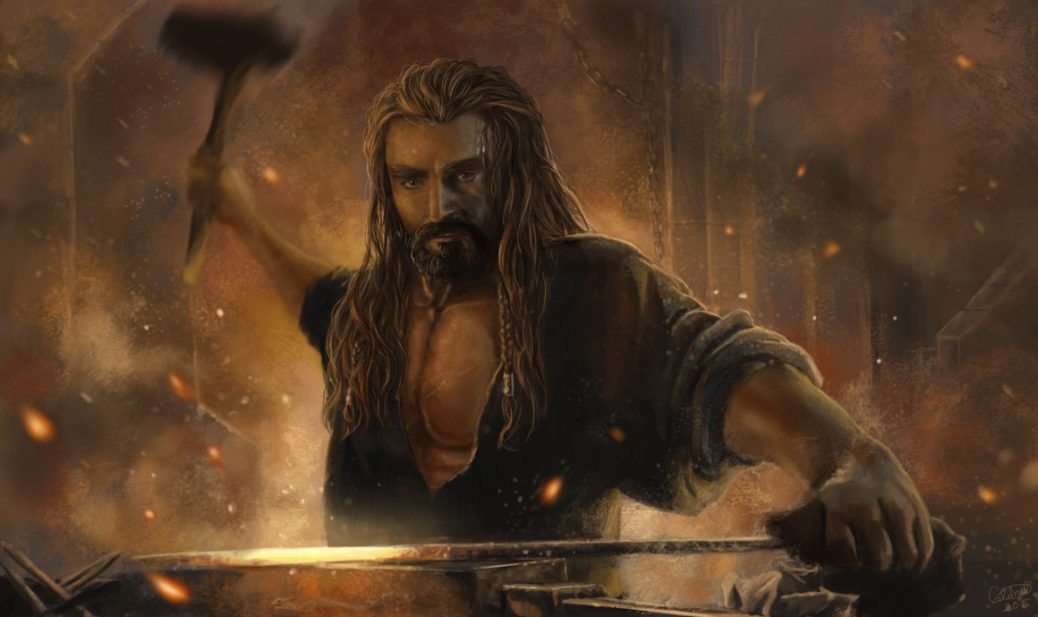 Tholam Urrith, they called it, in ages past – ‘Deep Scar in Stone’. Not one dwarfhold, or two, but an entire network of them, spanning the highest peaks and delving far below into the belly of the world; steadfast bastions and founts of prosperity, united in upholding the might and security of the dwarves in the mountains. But, while no foe could overcome their defenses from without, the holds began to fall prey to those vices so tragically common to the dwarves: greed, jealousy, stubbornness… these wormed their way into the hearts of the dwarf lords and saw them covet each other’s wealth, their craft, their hoards and their fortresses. Refusing to yield to one another’s entreaties, grudges simmered, and, when the tension reached its zenith, the lords took their axes and hammers to their kindred’s gates. The monsters outside looked on and laughed as the indomitable dwarven holds crumbled from within, brought down by the ecstasy of gold.

The fortresses of Tholam Urrith, which once shone with the fires of forges and the glow of gold, were silent and grave as the stone from which ther were carved; their people slain by their own kin, and their halls fallen into ruin. Monsters swarmed into the mountains, battering through the unguarded gates – even so, the few hundred dwarves that remained were iron-willed and tough as stone. Fighters became rogues; smiths became trapmakers. Those that survived the sundering were those who managed to let go of tradition and honour in favour of practicality and subterfuge. Striking from the shadows, hit-and-run tactics and carefully planned ambushes saw the remnants able to hold on to their homes, at the cost of any pride the dwarves had left – forced to skulk through the dark, strangers in their own halls. Time rolled, the age turned, and while the survivors lived on, they despaired of ever reclaiming their home.

That is, until the Red Asher came.

A tall, maroon-haired stranger, human but for his ghastly aura and soul-searing gaze, arrived in the mountains, somehow unscathed by the prowling monsters. Introducing himself as Asher, he spoke to the dwarves, praising their unflinching bravery and resolve. He then proposed a deal, the odds of which appeared to be impossibly stacked against him: if he, alone, could reclaim the surface, drive the monsters from the mountains and restore the holds to their former grandeur, the dwarves would be able to reclaim their home – under his jurisdiction. Believing that perhaps they were being mocked, at first they angrily refused, but as he pressed further, at last the dwarves gave their word that they would follow him if all went as planned. After congratulating them on a decision well made, Asher vanished into the mountains. The dwarves were certain that was the last they’d see of the red-haired man.

The following morning, an unfamiliar substance was borne through the mountains. It was like ash in texture, but smelled of sulfur, and was a strange red color. The alchemists didn’t quite know what to make of it, but the wizened seer among them saw it as an omen, heralding a storm. The seer would be proven right; before midday, the trees on the mountainsides had begun to creak, as hurricane winds came slashing from the North. The ash grew thicker, and burned hot in the air. By early afternoon, a great shadow could be seen in the distant clouds, and thunderous booms echoed through the mountains. It soared closer, the noise of its coming growing louder with each passing second, until at last, it emerged and soared over Tholam Urrith. The dwarves could but look on in fear and horror as the largest dragon they had ever seen let out a burst of flame great enough to engulf an entire mountain – which it did, burning many monsters to ash and leaving the peak charred black. It turned and slithered down, past several great dwarfholds, to the greatest of them all: the citadel of Tholam Urrith, where the mightiest dwarf lord had made his final stand centuries ago. Helplessly they watched as the great wyrm entered those once-impregnable black iron gates, and the citadel blazed from flame fiercer than any forge had ever produced.

Brave and stalwart though they were, the dwarves had never faced a foe as great as this, even when their holds were strong and their numbers great. And before they could think of the beginnings of a plan to deal with this new threat, the dragon had re-emerged, spouting a massive blast of flame into the air and, looking directly at the dwarves, declared,

“Half of my end of the bargain has been fulfilled. Now, I shall finish what I started, and prove that my word can trusted.”

The dragon lifted a claw, and in a deep, crackling voice ringing with magic, sang the ruins back to glory. Metal gleamed as if freshly polished; dust cleared; loose or broken stone was sealed and repaired. When the dragon was done, the dwarfholds stood as proud and stoic as they had in their heyday, and the dwarves realized just what they had done.

To have a dragon as their sovereign would never have been accepted by the lords of old Tholam Urrith – but then, those very lords had torn down their holds, while this dragon had restored them. Those brave dwarves that had fought on, though now bound to live under the Red Asher’s rule, lived to see their halls free of monsters and lit by forge-fire once more. And along with their ancient home, the merest glimmer of pride and honour was regained. Not much, no.

But it was a start.