Those That Trespass Against Us 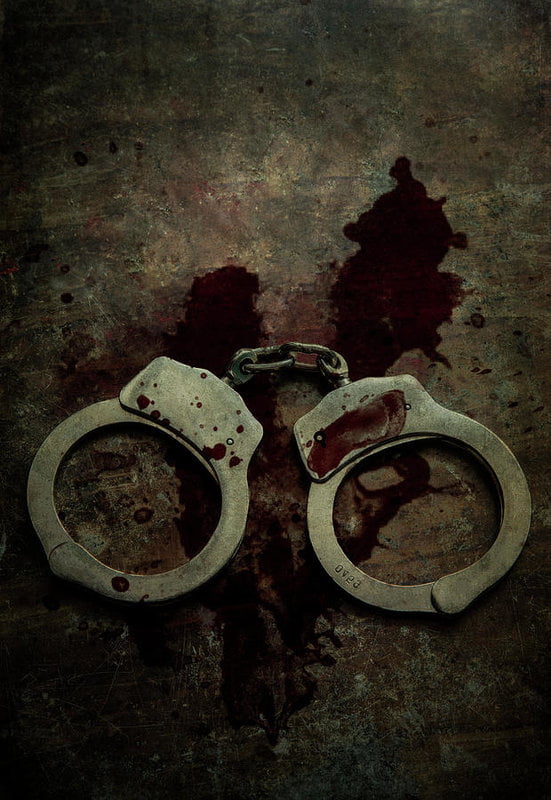 The cold grey stone of these underground walls claps with the echo of hard, pointed knuckles against chiseled, bony jawline. The room is small and made entirely of stone, adjacent another room that looks by the tables and cobweb-covered old machines, to have been an old hidden workshop. Jess Finnick, flanked by two of his toughest body guards, pauses to turn and pick up his still-lit cigarette, taking a long, hollow drag from it. He takes a wheezy inhale after, then turns and blows the entire intake of smoke right into the face of the fourth man in the room. Bound to a chair in front of them, his hands cuffed behind him, the last man doesn’t react immediately, his black curls hanging over his face like a shroud as the smoke clouds around his bleeding head, which is hung forward.

Jess reaches out and grabs a handful of the prisoner’s hair, pulling his head upward so the man faces him. He holds the cigarette close to the cut in the cheek he’d just been busy laying into, threatening a nasty burn. “You have a hard noggin, mate. I gotta say I did not expect to be down here this long, punching you until I’m the one hurting. You, though… you’re one tough son of a bitch.” Retreating the cigarette hand, he takes another drag, choosing to blow this cloud into the air this time around. “We both know this doesn’t have to go on all night. Just tell our Mr. Elliston that you’ll come work for him after all, yeah? Rest is history.” The man in the chair gave a response, finally, and it was not the one Jess wanted.

Raspy chuckles sounded from him as his sagging head bobbed up and down on his shoulders. “Come work for your man? Your man enslaves monsters. Only thing that can do that has to be worse than a monster, right?” Alro Black lifts his head, shaking the curls out of his eyes as he looks between all three of the standing attackers. Jess has worked him over a bit, his split cheek bleeding freely, along with another cut in his skin somewhere above his hairline. The crimson in his stubbly beard suggests a busted lip and possibly dislodged teeth. “You can tell Mr. Elliston if he needs to hear my “NO” in person… he knows where to find me. Tell him to swing on by… we’ll ‘talk’.” He almost smirks at them then, leaving the hinting entirely to the last word, and Jess becomes visibly irritated.

He leans in and drives three quick strikes with his fist into Black’s gut, drawing a few coughs from him as he spit blood. Scratching the back of his shaven head, Finnick sighs. “See, that’s the thing. He said if we can’t convince that “YES” to come out of you… then other things are gonna have to come out of you.” He snaps his fingers at one of the other two men, who responds by drawing a knife from his jacket and handing it over. In the light of the single lantern the men have positioned in the doorway between the rooms, the blade glints. “Pure silver. You understand, Arlo. If our employer can’t have you working for him like every other mutt, he sure as hell can’t take a chance on you working against him. Werewolves are with him or against him, and if they’re against him, they’re dead. That shit ain’t gonna change today.” He stoops low, putting the knife on the side of Arlo’s neck. “Nothing personal, or whatever. You got any last words you wanna say?”

“Yeah. Yeah, I uh…” Arlo shifts a bit in his seat and winces as the blade touches his skin, right about the same time that there is a muffled cracking sound, and he winces harder. “I got something to say.” Jess hesitates, and Arlo narrows his eyes at him. “I just broke my hand.” Jess’s eyes about pop out of his head in alarm as his hand flexes on the knife handle. In the second before he slices, Black’s other hand lashes out and digs his fingertips into Finnick’s throat. Blood bubbles and gushes past his fingers, and the knife clatters to the floor from the dying man’s slackened grip. The two other men move forward just as Arlo leans in, whispering in Jess’s ear as he breathes his last. “Does it still feel like nothing personal?”

Jess makes a choking sound as Arlo raises him by his throat with one hand, hurling him at the advancing muscle. One guard is knocked away, the other bends low and runs full speed into Arlo, knocking both of them through the doorway to the workshop. The lantern is kicked across the room, the light spinning and spiraling as the two men fight. Using his broken hand as a weapon, Arlo swings his arm like and ax, whacking the man so hard that gore splatters on the floor. There is a piece of that guy’s face on Arlo’s knuckles when he pulls the hand back, but the guard keeps attacking through the pain. Using both hands this time, Black throws the man’s head downward, pulling him off his feet and smashing his face through one of the workshop tables. Continuing into the concrete floor, the man’s dome cracks and he is still.

The final guy is up now and comes flying through the door, wrapping both arms around Arlo’s neck and dragging him backward to the floor, trying to squeeze him into unconsciousness. “Are you serious right now?” came the slightly breathless bewilderment from the older man, as he rolled over onto all fours. “Are you… trying to choke out… a fucking werewolf?” Pushing off the ground, Arlo flung himself straight up into the concrete ceiling, smashing pieces out of it with the thug acting as safety backpack. As they both crash to the floor, Black rolls over and grabs the lantern, whipping it around and smashing it down on the man’s face. The bulb breaks and the room is plunged into shadows, but the sounds of the lantern coming down a few more times against skull can be heard in the empty darkness.

Arlo emerges from the workshop, covered in more blood and moving to Jess’s corpse, where he proceeds to pat it down. Finding a cell phone in one of the pockets, he skimmed through it before coming to a name, Kenny Denver. Clicking it and holding the phone up to his ear, there is silence a moment. “…Kenny. Yeah, this ain’t Jess… it’s never gonna be Jess again. He and a couple other guys are here. Even told me that Jace hired them to either hire me or kill me. Whichever they could do faster, I guess. Now they’re dead. I want you to tell him that, and tell him if I have to sit tied to a chair for another second over any more of his bullshit demands, then we’re gonna have to have a lot more than just a talk about the answer I already gave him twice. You hear me, Denver? Tell him no more… or I’m coming to take his head, too.” After hanging up, he’d crush the phone in his hand, leaving the fragments on Jess’s body as he left.