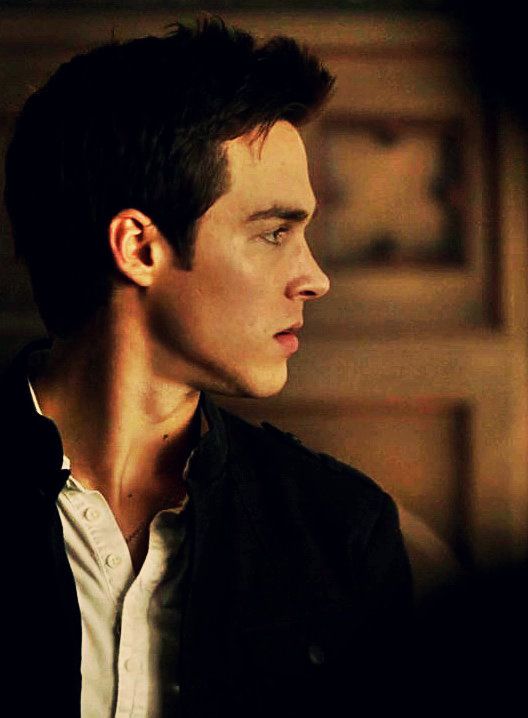 The rustic scent of blood carried across the room along with the sound of a timer that had been set for one hour. Across the bed lay a woman unconscious but very much safe, as he had promised when he had taken her to her bedside, before he had ever let fangs come to throat and blood greet his lips. The bed was stained red, remnants of their session oh so very clear upon sheets that had previously been white. What drew one’s attention most was the fact that the woman was still dressed, as much so as she had been when he had walked through the doorway with her only for the locks within to be drawn, signalling that neither were meant to be bothered until he said otherwise.

The television at the corner-side of the room was loud, a white noise against the back drop of moans, groans and occasional screams and beating against the wall that signaled to the work going on behind closed doors in this particular building. The thirst had won him over, along with the insatiable desires that ravaged his body on a daily basis. He had needed his fix, as much as the drug addicts on the curbside in the afternoon sun.

He hadn’t expected things to go by so quickly. He heard her groan and the nymph sat up straight, pink eyes dashing open to look at him where he stood, his eyes poised on the television. “How long has it been?” she asked. “An hour and a half. I turned the watch off,” he answered, turning to face her. “That won’t be a problem, will it?” She shook her head, giggle bubbling in her throat, unafraid that she had lost consciousness due to the fact that he had taken more blood than he had needed to. “You’re gonna pay, right? Boss gets really mad when customers go overtime and don’t pay.”

He reached into his pocket, grabbing hold of the money clip that slid from his grasp, tossed in her direction and on the bed. “There’s more than enough for the entire evening in there,” he said, a half-fanged smile glimmering at his lips. “If you’re capable of keeping me interested, there might even be a tip.” The nymph rose from the bed, blonde hair brushing over either side of her shoulders. As she stood, he watched with baited breath as the dress she had worn to bed fell from her in a pool about her feet that she then stepped free of on her way to him.

As her hands met his chest and the white button-up he wore, she began fiddling with the buttons one by one till his chest was bare. When her lips met his collarbone, his attention was momentarily lost by words echoing on the channel the television had forcibly been turned to. “Improvidence is in danger. Citizens are urged to evacuate before the Golden Death Cloud overwhelms the city. Go to Consequence. Perhaps there is some semblance of hope in the city of heroes.”

That smile of his is cast away, chiseled jaw hardening just as he feels dainty hands grab hold of his belt buckle, feels the tug of leather from cloth and the sharp zip that comes shortly after. As a blissful warmth envelops him, his attention is lost on the news though the story continues playing in the background. “Refugees have started to storm Consequences streets. Districts are being flooded. The threat of the Golden Death Cloud is upon us all. May the gods be with you.”

He can’t do anything about it. Just when things were going so well, some asshole had to change that. There’s no stopping the growl that clamors to his throat unbidden, the vice of his grip in her hair changing, tightening. The nymph takes that to mean that she’s doing her job well. He can’t fault her that. “Come,” he meanders, “the night is still young.” With that, she rises from the floor, her steps carrying her back toward the bed, still stained by the blood she’d shed that hadn’t ended up in the halfling’s mouth. He kicks his pants to the side, briefs following them and shrugs the shirt from his chest, quickly following suit.