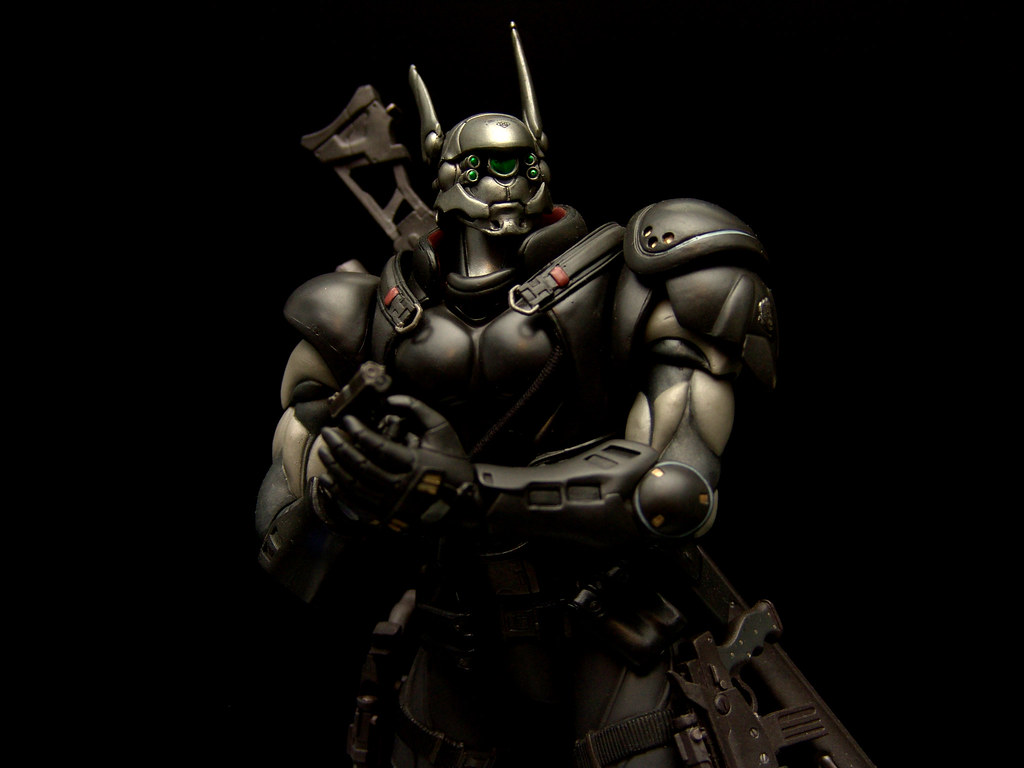 -….. approaching footfalls would echo from within the small room, on the opposite end. Green lenses glowed silently as the figured continued to walk towards the mirror facing him. Different uniform, different outer armor, same physical construct. Revealing himself as he approached the lit end of the room, he silently looked himself up and down. The badge of the newest movement, that had sounded like it was right up his alley. A keeper of the Peace, to defend the weak and defenseless against all who would oppress them. –

” Another cause, another time and place, and a new partner perhaps..” – came the voice within the newest addition to the ranks of the Urhmacher. Past memories welled up within, as his vision clouded with the thoughts of his former home, Olympus and all those who had been left behind. Bringing up his right hand, he rested it upon the sidearm, sitting within the tactical thigh holster, on his right. The Devastator, so named because of the sheer size of the round it fired. The .460 hand cannon of his own design. Armor piercers, incendiaries, trakk rounds and markers, that were signature marks for his Heads Up Display. Once fired, intended for whatever target he deemed, he could track the digital signature for up to a certain range. They could be detected through his vision. up to a certain time frame. Meant for vehicles and the like, no human would be able to survive through such a round. Other rounds, designed for the Magical, encapsulated AM. The war was against the oppressors, whomever they may be. Thumb cocking the hammer back halfway, he heard the faint click as the cylinder rotated, just the smallest bit. –

– Adjusting the armored vest, he checked the pouches for additional rounds, within full moon clips, meant for faster reloading. Then magazine holders, for the twin Scorpion SBR’s, which he carried while on patrol, as well as the larger rifle. the modified Mk-110, with the heavier, fluted barrel, drawn out a full 28 inches. Firing various versions similar to what his sidearm fired, the prototype, deemed ” Archangel “. Meant for Overwatch and surveillance targeting, it had multiple uses for certain missions handed down to the nearly 7’0 cybernetic combat unit. Armored hands flexed fingers gingerly, finally curling them, as he turned and grabbed the Archangel. His visual readout went through the last of his standing orders, issued by the General herself. A stark reminder of his existence and why he was, what he was. Darkness shrouded him as he dimmed the lenses completely down, as he crept out into the growing darkness. For those who thought they would go bump in the night…Something out here, would now go BUMP back…