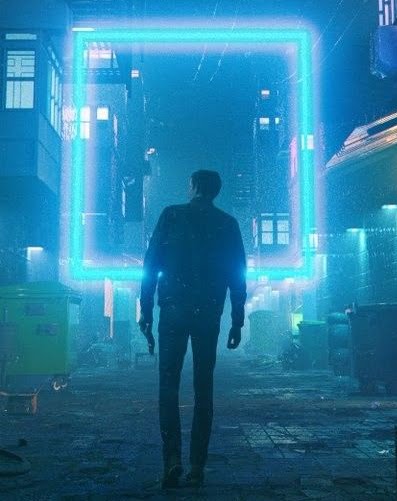 All it took was two days and the city had already been filled up. Either it be the washed up from Hellifyno’s grand opening of a planetary water park not too long ago, or the neon aesthetic drew people in, Desmond doesn’t care. All he knows is that his sister seems to be happy with it.

Only thing he’s afraid of is hell raining down and tearing this little floating island of theirs out of the sky.  He does, after all, like being apart of one of the only cities based on an island floating in the sky one hundred meters above ocean level.

The more he looks around at the bright neon signs, the busy yet oddly calm streets, and the subtle cleanliness underneath the mask of dark grey buildings, the more he realizes what this place symbolizes. What this is. It’s the living embodiment of Zoey. This place so peaceful, so perfect despite it’s look, is exactly what Zoey has wanted to be able to call home all her life. The fact that it took this long for such a place to be created here on Hellifyno is a shame; maybe this place might show the world what some simple cooperation and communication can do.

He finds himself atop the roof of one of the apartment buildings, overlooking the entire city in it’s expansive glory. So bright and dark at the same time, it brings Desmond to wonder how others might look on this place. Perhaps they’d deny it exist. Perhaps they’d look at it on the artistic level, and acknowledge the impossibility of it all. Maybe that’s the trick to this place. After all, Zoey had said she wanted this place to act as a punch to the face to the way Hellifyno works, while being a sanctuary for those who just want some peace.

He lets out a long sigh, taking a moment to let in that crisp midnight air. He can get used to this.

Interrupting his peace and quiet, would be Zoey asking, “So, what do ya think?”

Funny, he didn’t sense her arrival. Maybe she was already here, doing the same as him? Taking in the sights? “I think it’s going to piss some people off.”

With a hearty laugh Zoey responds with, “Well, everyone who’s come in seems to be happy. I think I’m doin’ somethin’ right.”

That laugh. He hasn’t heard her laugh like that since she was five. “I never said it wasn’t done right. Just that it might piss people off.”

Before Desmond could turn and ask his sister what she meant, she was already gone. Pulling the same teleport away trick he used to do to her.

He takes one last look at the city as it calls his name, trying to pull him in. He wants to give in. Take a load off. Get a break. No. He hasn’t earned that luxury. He still has his own sins to pay for. His sister deserves this. Not him. Not yet.