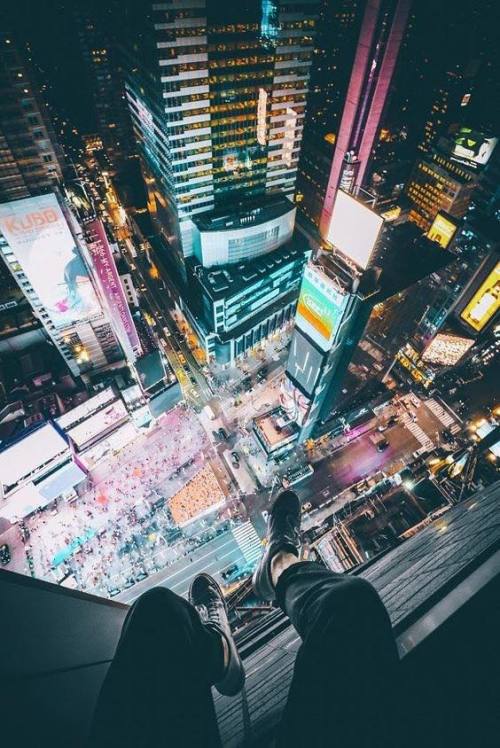 It’s a long way down.

The city is lit in neon luminescence the colors appear like code for the android when she sets her system to basic. It’s not that she needed to do this. Her core was at full power, no damage to her external or internal hardware; No corruption to her software. It was just…pleasant to the android to see the world this way. 1’s and 0’s. Simple. Logical.

She has seen so much and if she could boldly say it she…felt so much in the past few months. Maybe her matrix was compromised, maybe she was really only assuming she felt when it was really just a glitch that fooled her processor but she couldn’t shake the…feeling…things were changing. She had struck the match when she didn’t complete her mission. A simple task for her. Infiltrate the resistance, get their trust and intel on their organization and then? Makeshift a homemade explosive and leave it to detonate and wipe out the threat. It would look like an accident on their part, cement their guilt and keep TechCo off the hook for liability. They had an image to keep but upstarts are bad for business.

She had done things like this before, mainly off world with competitors trying to buy real estate and set competition Planet side. She had done infiltration and destroy bases. Wiped out company buildings disguised as a crazed employee and seduced corporate CEOs into blackmail and some cases conviction of crimes. But this was different. These were just everyday people. People with families….children… She knew the consequence but she would stand with them, protect them harm…little did she know just how low this company would go to get what they wanted.

Her name..was Tali. She was a sweet girl, 7 with spirit and hope. She was there with her father a peaceful man who had seen so much war. What they did to his brother in arms was too much. A hero augmented and celebrated in the news reduced to a limb and a enough organs to be kept alive but not really living. When he finally flatline’d…it was a mercy killing to say the least. He had aligned with TechCo to give them PR recognition he was a shinning man with a wife and son When the spotlight drifted away the bills came in hard. They bled his finances dry and when his wife left him it was the final straw. The chem’s they prescribe for the pain of augmentation resistance are not cheap and highly addictive. It did not take long before TechCo came to repossess their property.

The landlord found him a week later and thought he was dead. She was horrified to learn he was still breathing a pile of organs and one leg. How could anyone leave someone to die like that? So This man, Connor Reaves, his brother in arms took to the streets protesting and spreading word of this atrocity happening all the time in this great technological mecca. It made people uncomfortable and worried about their faith in TechCo. When they claimed a TechCo owned shopping center they had gone too far. It was to be a peaceful stand in, families standing together to say they will take no more. Tougher regulation and tax on AI and cybernetic companies so they could take advantage of the government loopholes no more.

Tali was Connors daughter, and the one to find the mangy wet dog sniffling at the back entrance of the shopping center. She took him inside and right to the center of operations they had set up in the most secure area of the building. She was a kind soul who could not stand by and let the beast sleep outside in the cold. And then the bomb detonated. It was a smart tactic even if risky but the cold hearts knew there were children and knew there a chance no one would suspect a stray dog for a bomb. K8 was distracted but she could hear it arming itself…too late to do anything but scream.

Everything went white…and she dreamed of 1’s and 0’s for a long time. It was peaceful, simple. She longed to remain there in the number cloud.

But what comes up must come down.

Just like her role. Once a prized asset to the company, treated almost equal at times by being spoken to with pronouns by her creators. Then she fell and how low did she fall. In the rubble, broken parts, leaking coolant, her processor barely keeping her basic functions in check. She was in bad shape. It could have been easy to let go, to shut down…they would come soon enough and she would be…re-purposed.

Something catches in the wind…a piece of paper with something written on it…She reaches at the right moment and…catches it. It could have been anything…notes or even blank but it wasn’t writing at all. It was a drawing. The one Tali was working on before the explosion. It was of the child and her, an android. She clutched that drawing and found the will to move again, one step at a time, one repaired part at a time, one restored program…

It’s a long way down but sometimes we have to fall to truly find a reason to live.