Walk among the gods. A light stroll within the new city of altars. 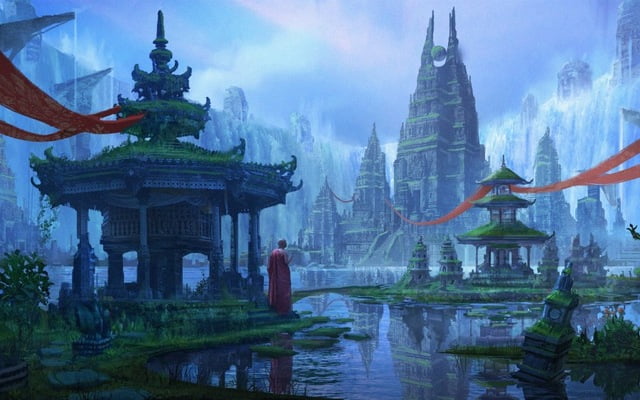 Loading...
Walk among the gods.
A light stroll within the new city of altars.

The leaves slightly shifted in anticipation. Behind the mask of a rabbit, the grand dark eyes moved a little, eyeing the distant hanging village from afar, whilst standing atop on the side of the main temple, that towered way above the ponds, in which the massive Koi carps were resting. Lazily drifting within the light waters.

Soon a stone skipped, as she jumped up into the dark sky of the night, right above the moonlight, and light as a feather, she shifted into a bird, cutting the air with her sharp little wings, to land on a nearby branch, from which the village could be seen better. Prayers of the priests were heard, praising multiple gods, in each of their own manner. Salesmen were giving out souvenirs and fruit as well as fresh herbs for alchemy. All was available, unless it wasn’t of animal origin.

To some it was a clear act of love towards animals, but the little bird knew better of the real reason. Having too much of a resonance could make an unwanted shatter of a dreamscape, or possibly draw unwanted attention. Whilst the mother was sleeping, it would be most unwise to pose more than a harmless village of altars.

The beady eye glanced over the wing, eyeing the sleeping dragons in the mountains. Even at night this place knew little piece. Some tourists have began to walk among the trees and bridges connecting the tree houses. In a blue yellow and violet hue, the shrines and establishments were lit. But no brothels, were sold. Alcohol and tobacco only for religious purposes. Candles were pretty popular. Hallucinogenic and exotic mixtures. The best part of being the high priest of shadows, was that none of the villagers may approach her, since her face was seen as a divinity among these parts.

Soon enough she decided to try some of the crisps and dried fruits that a nearby vendor was selling with great passion. The small paradise bird flew, and in few moments, two naked feet touched the ground as the coat fell with her, gently touching the high priestess’s ankles. The rabbit mask looked up as others, that were lucky to be awake at that moment gasped. “It is the priest of shadows!” “The original of shadows has arrived to grace us!”

“Hey you!” The girl said to the vendor, who gawked at her with a starstruck gaze. “I wish to buy a bag of dried fruits from you!” It was mainly sweets that she craved, for no matter what she ate, it was nothing but an element of ritual and nothing more. Her feet always greedily took what ground gave to her. She was, after all, the master shapeshifter and mother of worms.

“Y… Yes ma’am!” He bowed and passed the best selection towards as an offering, Lazily reaching under her dark coat, decorated with green clouds and cherry blossoms, she reached out her fist holding three golden coins. Seeing that the merchant was afraid to even look at her, she cleared her throat. “I said, I wish to buy them!” It was then, that in fear of his dignity, the man was quick to accept the payment, and soon the trade was done. “Seriously…” The girl said, and eyed the people around her. “And what are you looking at? Go back to your business…” She stated bluntly and with an irritation in her voice. Somehow she couldn’t grow used to the attention this place was getting lately.

Making her way towards the bridged marsh, she passed over one of the wooden bridges, which were accompanied by lamps and fireflies, dancing around them. Resting on the side of the bridge she opened her bag, and lazily began to nibble on the dried fruits. Somehow it was a little excruciating. She remembered the times when she could speak to the mother alone and dream at day, but with more people, even nights have become more active. The rabbit mask was slightly lifted over her hair, revealing her gentle, childish face.

The bag was empty quicker than she expected. Maybe she was in that state of mind, where time passes quicker than one could perceive. She was about to toss the bag, before remembering, that this was a sacred ground for her. Folding the paper bag, she slowly made her way to the hanging village.

Tossing the bag in the nearest bin, she began strolling absent-minded to see what else this village had made in the short span of time. Not only the grand temple was built in mere months, but even the forest was filled to the fullest with tree houses and shops on small forest paths, decorated with lanterns and small flags, corresponding to each religion that was taking place.

Noodle god for noodle shop, Fortune god for trinkets. The god of war for a makeshift weapons camp. All the traders were using the theme of the city, to better their sales. This did sit strangely with the girl passing them. But if mother deemed is as a rational way towards their goal. So be it. She did know that one must keep their enemies closer. Who knows, maybe among the false gods, a real one shall land, to be lured into their webs.

She had walked a circle, passing a lonely path, that led to this location. Getting here was not easy. The path trough jungle was dangerous, there were no docks, and not even a fine place to land with a flying apparatus. The only effective option ere portals. Portals, they did know were connected to one of the true gods. This trace of thought however led her nowhere. She stopped, seeing that the march of bridges were visible again. For a moment she stood there, eyeing it trough the bunny mask.

For a brief moment she eyed the temple in the distance, as a shy light of the morning sun was rising. It was time to move on. After the thought she had saved just for herself, the silhouette of the little girl with the bridges in the background turned into a bird once more, and flew up into the early sky, letting a single feather fall on the ground, disintegrating as it touched it.

The city was bustling as always, never resting, and always praising the gods, no matter how ridiculous these ideas may get. Soon the sounds grew louder, as the morning sun was promising another eventful day for all the tourists and adventurers, that came to see the wild animals, dragons, the temples and strange community.
0 Comments