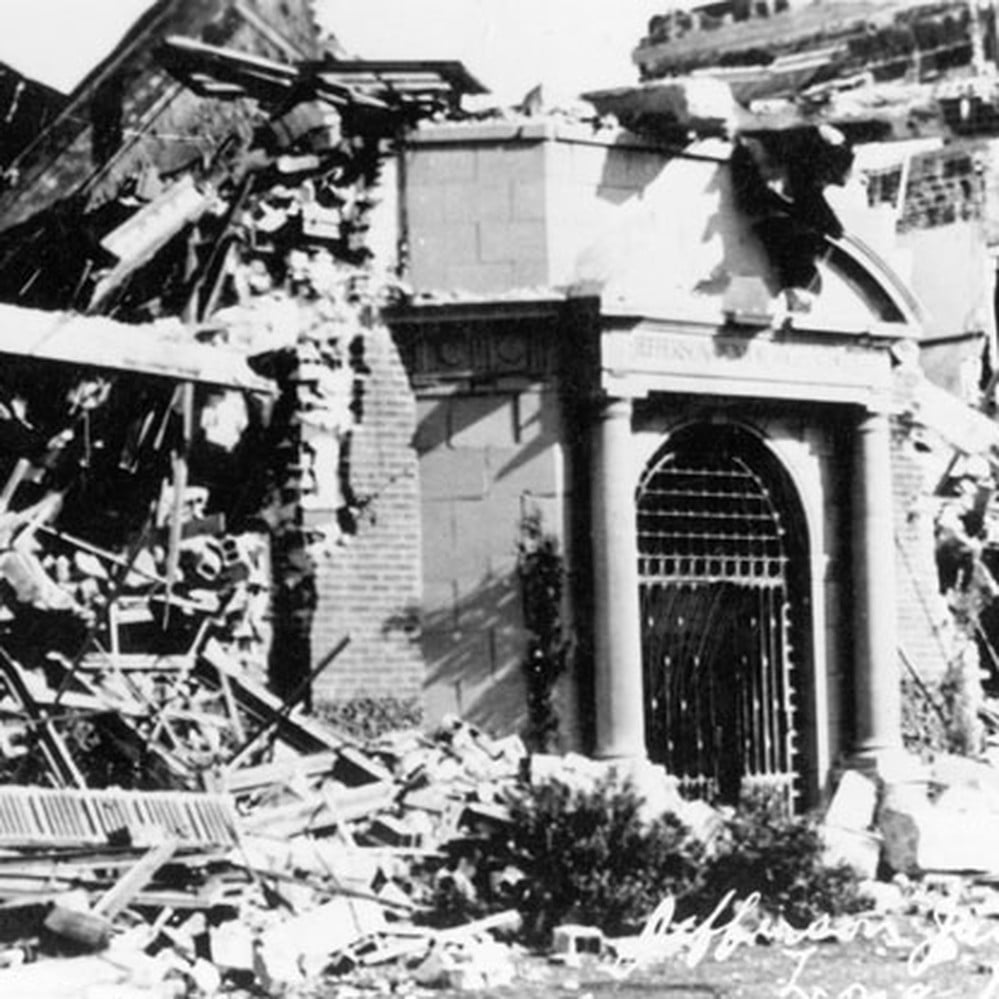 The disturbance had hit Consequence like an earthquake. A tremor that rippled from one side of Hellifyno to the other and felt to Cielo like the end of the world.   Obscurité- the classiest private club this end of the Red Light District, shook on its foundations.

Four levels of happy endings buckled and folded. The facade fell apart and collapsed into the street, revealing the iniquitous chambers within, dirtied like the sex it sold.

The dwelling beside it shook and baled, crashing into the street in a sprawl of rubble, broken timber and brick dust. The one beside it also, a chain reaction as the ground became unstable. The fine avenue that Obscurite was situated on became a mess of sink holes, uprooted trees, upturned cars and devastation.

Cielo had thrown herself through the door beneath the stairs, slamming against the wall as she descended, perhaps upon observation, counter intuitively, the rough wooden steps that were already collapsing as walls twisted. The cellar was a relic of past occupation. Vaulted ceilings of pale granite that far outlived the row of brownstone townhouses, crafted many centuries before. There had been talk of a hidden temple and the remains built into the designs by that crafty architect 150 years before. Cielo hoped those craftsman were more accomplished than their later counterparts as the deafening rumble of the facade collapsing caused the timbers above to groan and creak and dust to shower down upon the woman

She was slammed against the wall as the ground gave out beneath her feet and there was nothing but darkness. When Cielo awoke, she was sprawling upon a pile of broken slabs and pavers, harsh angles pressing into bruised flesh. She could not see, but could not tell if it was darkness or blindness. Gingerly moving, she felt the rubble shift, detritus bouncing and echoing through a cavernous void, to crash in the distance below her.

Fear gripped her throat, turning a scream into a dust choked croak.

In the distance, the persistent drip drip drip of water but other than that, the silence was cacophonous.With trepidation, the frightened, injured woman, reaches out, feeling about her, bricks, rock, timbers. The musty dried dust of a long sealed chamber gasping for air.

Cielo felt the cool breath of a breeze upon her leg and as her eyes became accustomed, a jagged aperture of deep charcoal in among the inky, velvet blackness of a tomb.

She concentrated upon that, willing eyes to drink in the meagre light of whatever freedom provided it. Unable to detect distance, but hopeful as she gently shifts, curling legs and knees towards her, shifting bricks and hearing the musical shower of them careening into the void below.

Cielo’s heart slammed, panicked, against bone. So loud in the silence. The blood rushing through her ears, pounding against her skull sounded like a tsunami.

Panic rising, burning at her throat and squeezing Cielo’s mind until she could not think or reason.The cool breeze deviates, becoming rhythmic like the cold breath of death against her flesh

It must have been early morning because an hour or a day goes by and that patch of charcoal becomes oily grey and Cielo is able to discern shapes about her. Timbers leaning, broken like some almighty game of Jenga. The pile of broken slabs and brick that was her perch, and to her right and down below her. Nothing but the sort of cold blackness that would make one think one was staring into the bowels of Hell.She was standing now.

Licking at the thin runnel of water that was running down the supporting wall, bitter, and dirty, but wet. Testing out the timbers,  were they stable enough to support her weight as she looked for a way out through the broken floor of the room she had just occupied.

The quake had revealed a sub-cellar, a space that she was not aware was there and was certainly not on the plans. Fingertips felt around dressed stone and hard lines and signs it was man made. But who had created it, and what its function had been was the last thing Cielo was thinking. Beyond the panic and the numbness of realization that followed, there was an unsettling feeling that accompanied each glance towards that void, deeper even than this chamber. She could not shift the thought that something was down there. And whats more…

It was aware of her presence.

Cielo had to get out.