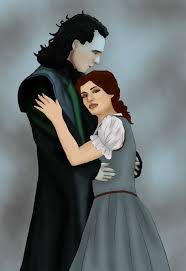 If he was going to be honest with himself, he knew that he had never been welcomed in the place that was supposed to be his home. Ever since he could remember he didn’t feel like he was really part of the family. He felt like an outsider or a guest that was allowed to stay in his parent’s kingdom. And one day…he knew why. One day he learned his true identity, that he, Loki, was not an Asgardian and not of the royal family at all. He was a frost giant. And like many outsiders he became resentful…and he became angry. He began to hate the family who had raised him and of course his pension for mischief and trickery didn’t help matters much. Deep down, he only wanted to earn the approval of his foster family and be equal to his brother. He used that rational to attempt to enslave the human race and pretty much set fire to most of Manhatten. Not only had his mission failed, but he had set himself up for a punishment that was far worse than rotting in an Asgardian jail cell. As a royal child, he had always gotten away with his mischief. But now that he was a grown ass man and his mischief had cost lives, well…that was something that could no longer be tolerated.

As a result, he was no longer welcome in his own home. Odin rationalized that if he had loved Earth so much he might as well stay there for the rest of his immortal life. He was only allowed to keep his powers within certain limits. He could not use it to hurt anyone or cause anyone pain or misery..and where was the fun in that?! He also was no longer allowed to go to other worlds and had to stay on earth, to live among the humans as one of them. He despised humans normally so that was a punishment worse than death to him. He had gone from a cozy life of one of the few chosen on Asgard to the normal harsh life of a mortal scurrying around down there, dragging their knuckles in the dirt just to make enough to provide themselves with food and housing at the end of the day.

All it took was a teleportation and there he was once again, laying in a celtic design that was imprinted upon the ground. That was his so called family alright..showing off their might. And they were damn fools for it too, because the people of earth forgot their history almost immediately and only a few of them actually identified with the old ways. He lay there face down in the dirt for a moment, reflecting on just how much his life sucked. Well, he thought, at least the handcuffs were off of him. At least now he didn’t have a gag over his mouth. Oh yes, such a fine brother he was…bearing him into Asgard as a beast that he had caught and not his own brother.

He was not completely lost. He had been to earth before and knew how to blend into their kind. He used magic to change into a suit and tie(he was a sharp dresser even in the poorly designed rags that these humans were fool enough to wear. Next, he tried to get his bearings so that he could find out where he could get lodging until he figured things out. He slicked back his black hair like he always did and wrapped a scarf around his neck. He came across an old Toll Bridge and checked out the sign that stood alongside of it. Storybrooke Maine, eh? Seemed like a good place to wallow away in his own self pity as any. He leaned against the bridge as he tried to think of what he could possibly do next to live beside the human race.